Global equity markets crept marginally higher this week despite the lack of progress on a U.S. stimulus package. This week, we address the dichotomy that has emerged on the virus front between the U.S. and much of the rest of the world. We also discuss the implications of the upcoming U.S. elections now that Senator Kamala Harris has been announced as the running mate alongside Joe Biden on the Democratic ticket. We conclude with some reflections on the market’s resilience of late.

Two meaningful trend changes began a few weeks ago, and have continued this week.

First, the U.S. has seen its number of new daily infections slow, particularly in states like Florida and Texas. Hospitalization admissions have followed suit and alleviated the pressure on the health care system. To be clear, the numbers remain elevated, averaging more than 50,000 new cases daily, as shown in the below chart, and there are states seeing increases. However, the national trend is heading in the right direction – lower – suggesting containment measures are working. 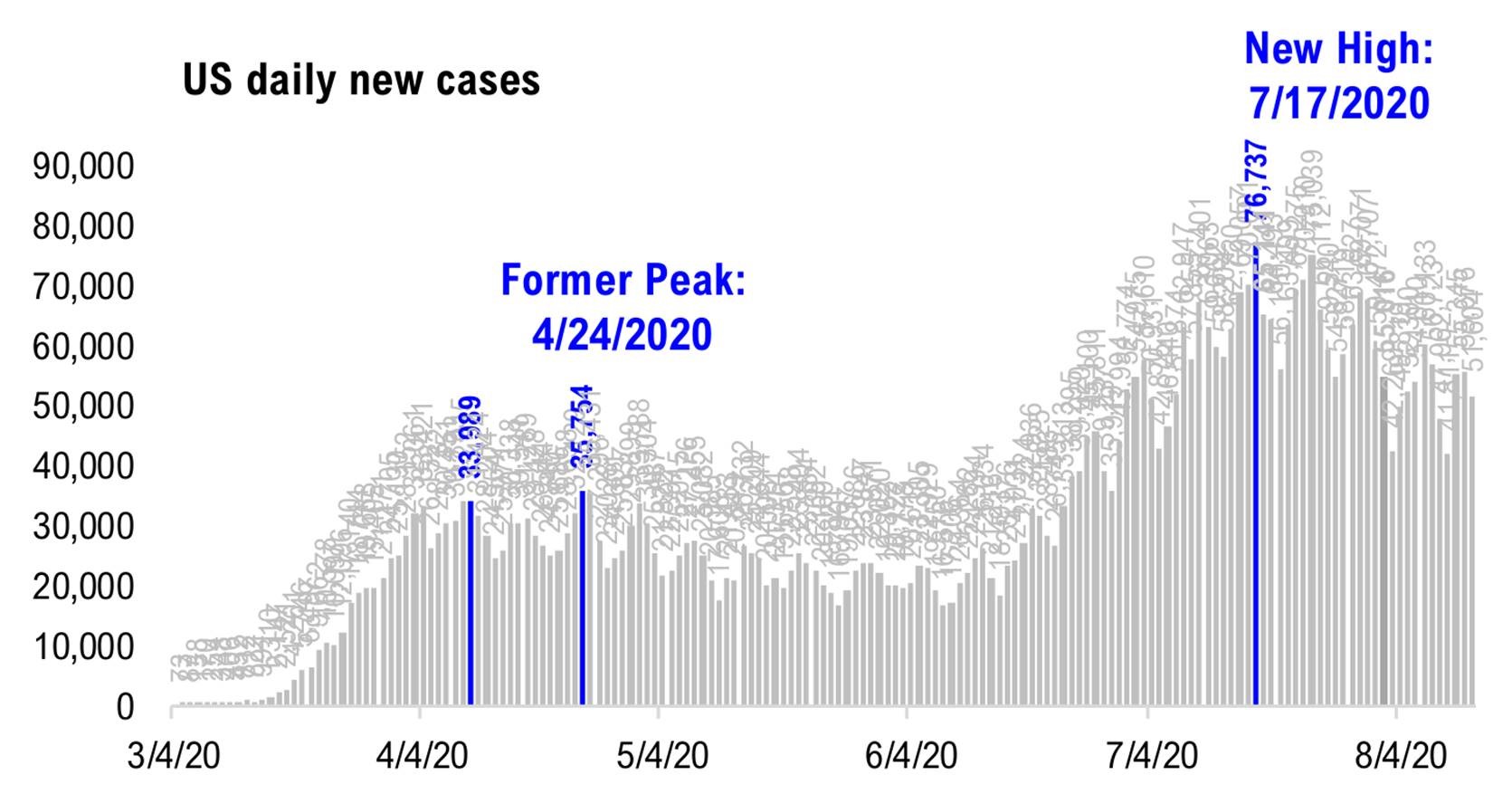 The next chart shows the daily new cases by weekday over the past several weeks, during which time new daily cases have progressively decreased. 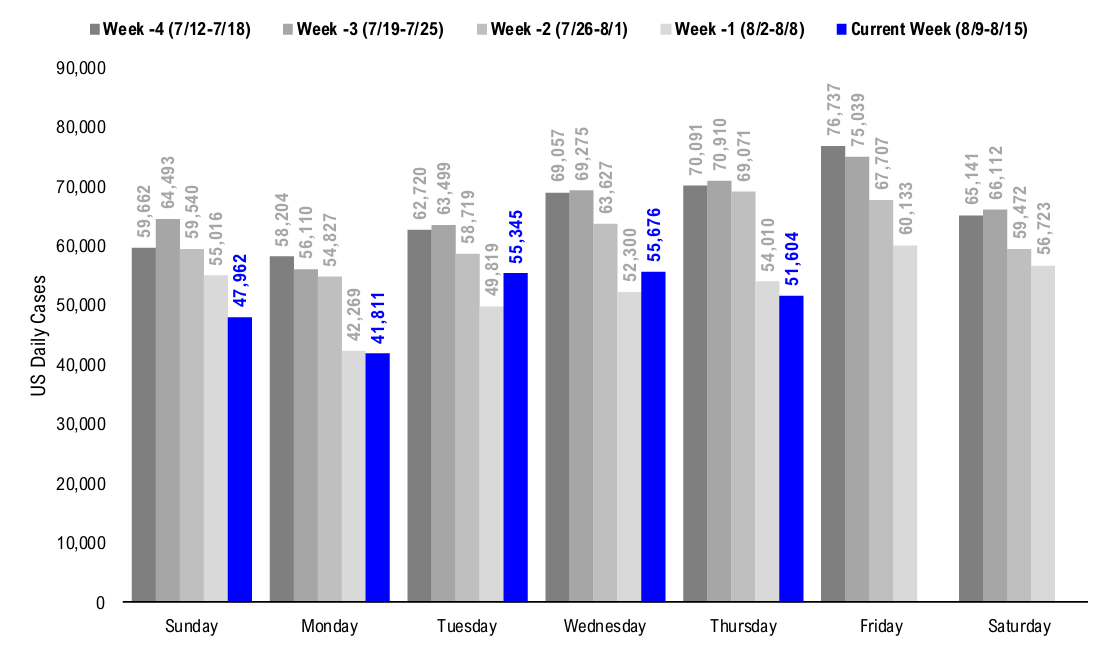 The trend elsewhere is arguably worse than it was a few weeks ago. Hotspots, including most of Central and South America, India, South Africa, the Philippines and Indonesia, have yet to see meaningful declines in new daily cases. Meanwhile, countries like Australia and Hong Kong have fortunately seen some stability in their recent outbreaks, though a trend lower has yet to materialize. More worrying is the resurgence of the virus in Japan and European countries such as Spain and France where new daily cases are trending higher.

The U.S. elections are now just a few months away and the rhetoric will undoubtedly pick up sharply in the weeks to come. This week, Democratic presidential nominee Joe Biden announced that California Senator Kamala Harris will be his running mate. Vice President picks rarely influence election outcomes. While there may be some incremental impacts at the margin from this week’s news, we don’t expect it to shift the narrative much.

The race for the presidency understandably gets most of the attention. But, the legislative branches of the U.S. government will also be elected in November. The U.S. Congress is made up of the Senate (currently controlled by Republicans) and the House of Representatives (currently controlled by Democrats). Within Congress, there are certain rules that require enough bipartisan support for a law to be passed. This important division of power acts as a guardrail of sorts, and ensures that any sweeping policy changes have enough support from both Democrats and Republicans. In other words, there are checks and balances in the U.S. political system that ensure a President alone cannot drive policy.

With respect to election outcomes, we see three plausible scenarios: 1) status quo; 2) Joe Biden as President while the House and Senate stay unchanged; or, 3) a sweeping victory for the Democrats (President, Senate, and House). This latter scenario may pose the most uncertainty for the market as it could increase the odds of higher taxes and more restrictive regulation in the future among other things. Nevertheless, we think the elections are unlikely to alter the course of fiscal policy in the intermediate term as both Democrats and Republicans are incentivized to help their constituencies through this period of economic malaise. Furthermore, accommodative monetary policy, which has helped ignite the economic and market recovery is unlikely to change any time soon regardless of election results.

Many investors remain concerned about the current backdrop. After all, we remain in the midst of a global pandemic, with an economy that is recovering after a multi-month period of forced shut down. Much uncertainty remains; nevertheless, global markets have been resilient in recent months. The widely followed S&P 500, an index representing the U.S. equity market, is higher today than it was at the beginning of the year and has nearly recovered to the all-time highs experienced in February this year. Elsewhere, markets continue to claw back much of their losses, though they still remain below breakeven on the year. While this may seem incomprehensible, there are some justifiable reasons for the resilience. More specifically:

We have been impressed with the recovery, but remain vigilant given the elevated level of uncertainty. As always, we don’t know what will transpire in the weeks and months to come but will remain focused on ensuring that our investment plan can deliver the required outcomes of our clients.

The peak-to-trough numbers for the COVID-19 pandemic market decline and subsequent recovery are provided in the table below, as of today’s closing prices. This week, markets were up slightly in the U.S., Europe and the Far East, and the Emerging Markets, while Canada was down slightly.