One thing the market hates more than bad news is uncertainty.  While we’ve all known that rates are rising (for a while now, the Fed and BOC has been very clear), the various ‘grey areas’ the world is facing became a little bit more pronounced this past month regarding the U.S. vs. China spat, Brexit and the (traditionally volatility inducing) grey area of the US midterm elections.

The fear of the unknown can be a scary thing – especially if you’re predisposed to assuming the worst.  Suppose for instance I drop my iPhone on the ground (like I did at lunch today) and it lands face down.  Has the screen shattered to a million pieces? Or is it as good as new?  I won’t know until I look and because I was able to see 2 seconds later (as I frantically picked it up) the uncertainty was gone and I was left to face the facts of either getting a new phone or feeling like it’s my lucky day (it was my lucky day, phew).
If I had to wait longer than 2 seconds to find out, my mind would be left to wonder about the worst case scenario and it would be both broken and not broken at the same time – much like the market is assuming with respect to all of these (albeit heavier) grey areas.

This phenomenon is better explained by a man named Erwin Schrödinger and his cat.  Schrödinger's cat is a famous hypothetical experiment; a seemingly paradoxical thought experiment devised by Erwin that attempts to illustrate the incompleteness of an early interpretation of quantum mechanics when going from subatomic to macroscopic systems.  Ok, say what now?

Here is a somewhat simplified version of the virtual experiment:

A living cat is placed into a steel chamber along with a hammer, a vial of hydrocyanic acid and a very small amount of radioactive substance. If even a single atom of the radioactive substance decays during the test period, a relay mechanism will trip the hammer, which will in turn, break the vial of poisonous gas and cause the cat to die*.

*note that this is a mental/virtual experiment and no cats were actually harmed.

Nobel Prize-winning Austrian physicist Erwin Schrödinger created this mental experiment in 1935 to point out the paradox between what quantum theorists held to be true about the nature and behavior of matter on the microscopic level and what the average person observes to be true on the macroscopic level with the unaided human eye.

In the experiment, the observer cannot know whether or not an atom of the substance has decayed, and consequently, does not know whether the vial has broken and the cat has been killed. The cat will be both dead and alive until someone looks in the box. In quantum mechanics lingo, the cat's ability to be both alive and dead until it is observed is referred to as quantum indeterminacy or the observer's paradox. The logic behind the observer's paradox is the proven ability of observation to influence outcomes.

The role of the observer remains an important question in the study of quantum physics and is an endless source of speculation and conjecture in quantum computing and pop culture. Schrödinger himself is rumored to have said, later in life, that he wished he had never met that cat.  Ha.

As investors we are observers and the market is a reflection of so many observations – the quality of companies, the state of economies, fear (or promise) of the future unknown and expectations based on the past. The cat is whoever you want it to be.  Lately, the cat has been Trump (but really it should be the U.S. as a whole) but for the purpose of this week’s WOTS, our cat shall be the upcoming US midterm elections because they are heading out of grey area next week (on Tuesday), but until then, this cat is both a democrat and a republican.

US Midterms - What’s Likely to Happen on Tuesday
Polls are suggesting that the Senate is likely to stay Republican with current aggregates giving them ~85% chance of keeping control (that said, the narrative since 2016 has been that polls cannot be believed any longer, so, enter our politically torn cat).

As for the House, the math looks to be almost completely the opposite. The Democrats currently have ~85% chance in polling aggregates of taking control of the House.

Regardless of where the penny drops, if someone wanted to put a positive spin on the next 12-months, this chart looks pretty good: 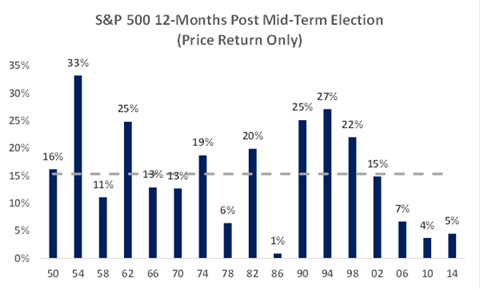 Over the past 17 post-midterm years (measured Nov to Nov), the US market has never had a negative outcome and has averaged about 15% before dividends. Now, it is important to note that this overlaps with the third year of the Presidential cycle theme – you typically see a lot of window dressing during the third year of the Presidential cycle because that’s when the President and Congress are trying to put as much lipstick as they can on the economy (tax cuts, spending) in order to help the reelection campaign that takes place in year 4 of the cycle.

The next obvious question might be – what about Canada? 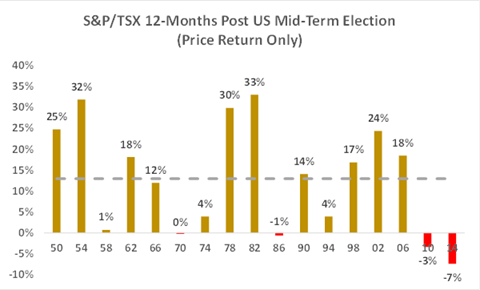 So, we don’t look as good; there have been 5 flat or negative outcomes. That said – the TSX has a propensity for outsized gains during post mid-term years with basically half of years (8/17) posting at least a 17% gain before dividends. So, the TSX has very much been an all or nothing proposition during these years and based on our positive comments a couple of weeks back on Canada, we would lean towards the positive.

Click here to request a special report released by my PAG this morning, ‘Midterm madness and markets’, which outlines the midterms and the state of the US economy (which is firing on all cylinders btw), Trade policy (regarding the U.S.-China trade war), the likely outcome and historical precedent.

Now you are in-the-know with Word on the Street.