As the chart below shows, today China dominates global inputs for solar panel production. What the chart doesn’t show that their industry takeover, less than a decade in the making, was built in a region dominated by what several countries, Canada included, has referred to as an ongoing genocide. A Sheffield Hallam University study (In Broad Daylight) last year found that nearly half of China’s solar panel inputs originate from what the PRC calls: “…the organized transfer and employment of rural surplus labour.” Think Orwell here. Work camps. Uyghurs 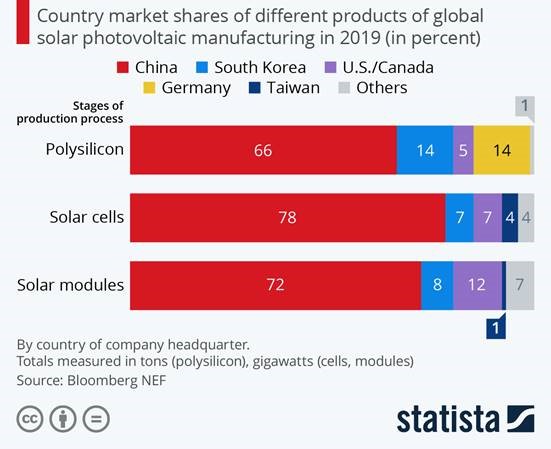 The Sheffield study concludes that China’s rapid takeover of the world’s solar market: “… comes at great cost to the workers… In the Uyghur Region, companies create green energy by consuming cheap, carbon-emitting coal… to improve climate conditions (they) sacrifice humane labour conditions in the bargain.”

Gut-check: Lately there’s been much mucky mucking about socially-responsible investing. If that’s a reflection of YIMBY (yes-in-my-back-yard) that’s fantastic. But as for financial analysists and CEO’s as arbiters of ethics, can we agree that they aren’t exactly in their wheelhouse there? As for Hollywood, politicians, and young radicals “speaking truth to power.” Um… Coal-powered slave labour is bad, right?

Hello? ESG? Anyone? Is this thing working?

Still preferred? Credit market and interest rate risks are in focus this week as the Fed surprised with its plans to sell its corporate bond holdings. But amid those risks we look to a seemingly unlikely place—the preferred share market—and ask whether it can still provide portfolio income, as well as defense, in this environment.

Have a great weekend!