From a high level, all three countries win in this deal. We take a look at some of the key elements that have changed

After more than a year of discussions, negotiators from the U.S. and Canada worked through the weekend to arrive at an 11th-hour agreement for Canada to join Mexico in an updated NAFTA deal. The new name of the accord is the United States-Mexico-Canada Agreement, or USMCA.

With the agreement in principle, we increase the likelihood that a new NAFTA deal will be implemented from 60 percent to 85 percent. However, there are still a number of hurdles: 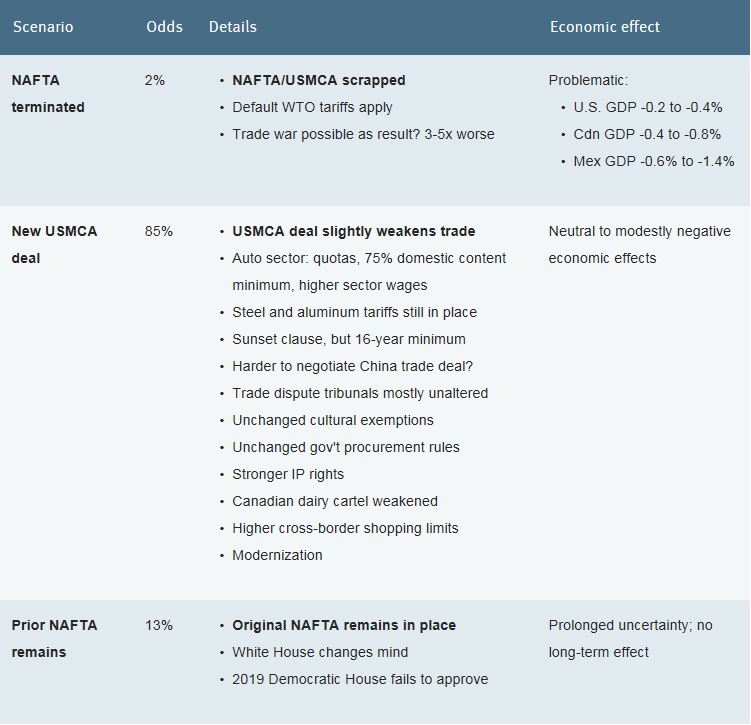 Let’s take a look at some of the key elements of the deal that have changed.
Autos
To avoid tariffs, and as previously agreed to between the U.S. and Mexico, 75 percent of auto production must take place within North America (up from 62.5 percent), with 45 percent of labour being paid at least US$16 per hour. In addition, Canada also agreed to a maximum quota on auto and parts exports. But because the limits are over 40 percent above current levels, the quotas don’t present any current constraints. However, they could become problematic should auto exports grow in the future.
Blanket tariffs
The existing tariffs on steel and aluminum will remain in effect for Mexico and Canada, a detail that is of particular concern for Canada since we are the largest single exporter of these items to the U.S. Fortunately, side negotiations are currently ongoing that seem likely to free both U.S. neighbours from these barriers.
China
Revealing the level of animosity between the U.S. and China, the new agreement seeks to limit the ability of Canada and Mexico to negotiate a free trade agreement with China by requiring a country to give notice if it enters into trade talks with a non-market economy. This will also protect the negotiating power of the U.S. by limiting China’s ability to bypass U.S. tariffs by transporting goods through either country.
Dairy sector
Canada has made concessions to further open its dairy sector. Through the agreement, the U.S. will gain access to 3.6 percent of the Canadian dairy market, a slightly larger chunk than the 3.2 percent allocated to Pacific CPTPP countries and to Europe in the CETA trade deal. These concessions are a short-term disadvantage for Canada’s dairy industry but do benefit Canadian consumers.
Trade dispute mechanisms
Canada managed to protect the trade-dispute mechanism that it holds near and dear, representing its biggest win in the negotiations. While the pre-existing anti-dumping (Chapter 19) and state-to-state (Chapter 20) mechanisms remain in place, the firm-to-state dispute resolution (Chapter 11) has largely been cut. Interestingly, the scaled-back chapter was disproportionately used by U.S. firms against Canada and Mexico.
Sunset clause
Although details around the sunset clause are still blurry, it appears to be similar to what Mexico originally negotiated. This means the USMCA is subject to an official review by all parties after six years (notably, after President Trump will have left office) but is guaranteed to exist for at least 16 years. This represents a marked improvement from the original U.S. proposal for a five-year review after which the deal could be terminated immediately.
Who wins?
From a high level, all three countries win as they seemingly avoid destruction of one of the world’s most successful trading arrangements and eliminate a great deal of uncertainty.
President Trump wins in that he has technically “killed NAFTA,” if only in name, and proved that he can successfully negotiate a trade deal. He can now turn all of his trade aggressions towards China.
Canada wins in that it did not concede as much as originally feared. The key dispute mechanisms remain in place, the auto sector quota is well above current export levels, the sunset clause is weaker than originally envisioned and a smaller portion of the dairy sector was opened than feared.
Mexico comes off slightly less well given its auto sector will have to pay substantially higher wages in certain circumstances. That said, the country will enjoy largely unrestricted access to the U.S. market, ensuring its large trade surplus will most likely continue.
It’s important to note these positives primarily stem from the agreement exceeding low expectations, rather than actually improving current trade relations. While the new deal can be perceived as slightly worse for future economic growth compared to NAFTA, the immediate risk-on response from financial markets is a reassuring response.
Overall, it’s a deal North America can live with, and that’s good enough.
Contact us today if you have any questions or would like to discuss your financial future.
This document has been provided by RBC Global Asset Management Inc. (RBC GAM) and is for informational purposes only. It is not intended to provide legal, accounting, tax, investment, financial or other advice and such information should not be relied upon for providing such advice. RBC GAM takes reasonable steps to provide up-to-date, accurate and reliable information, and believes the information to be so when provided. Information obtained from third parties is believed to be reliable but RBC GAM and its affiliates assume no responsibility for any errors or omissions or for any loss or damage suffered. RBC GAM reserves the right at any time and without notice to change, amend or cease publication of the information. This article may contain forward-looking statements about a fund or general economic factors which are not guarantees of future performance. Forward-looking statements involve inherent risk and uncertainties, so it is possible that predictions, forecasts, projections and other forward-looking statements will not be achieved. We caution you not to place undue reliance on these statements as a number of important factors could cause actual events or results to differ materially from those expressed or implied in any forward-looking statement. All opinions in forward-looking statements are subject to change without notice and are provided in good faith but without legal responsibility.
® / TM Trademark(s) of Royal Bank of Canada. Used under licence. © RBC Global Asset Management Inc. 2018 RBC Wealth Management, a division of RBC Capital Markets, LLC, Member NYSE/FINRA/SIPC.