After a noisy summer for financial markets, each passing week in September has been helpful for refining the proper question to ask...

“If I had an hour to solve a problem and my life depended on the solution, I would spend the first 55 minutes determining the proper question to ask.” – Albert Einstein

...about global equity markets. It now seems to have been distilled to this: will a trade deal between the US and China – and to a lesser extent, interest rate cuts by global central banks – occur quickly enough to create a “soft landing” for an economy that is otherwise headed into a recession?

The final few words in that question are a bit bold, but they are also what September has helped to clarify. A quick glance at the index of US Leading Indicators (chart below) shows the strong signaling effect that the index has for stock market declines and recessions. One can pretty easily eyeball that when the index has fallen to zero or lower over the past 30 years, the date ranges are painfully familiar to investors: 1990 (recession), 2000 (Tech Bubble), 2008 (Financial Crisis), 2012 (Euro Debt Crisis), 2015/16 (Yuan devaluation, crude sub-$40). After including this month’s data, we are now almost back at this important zero level. 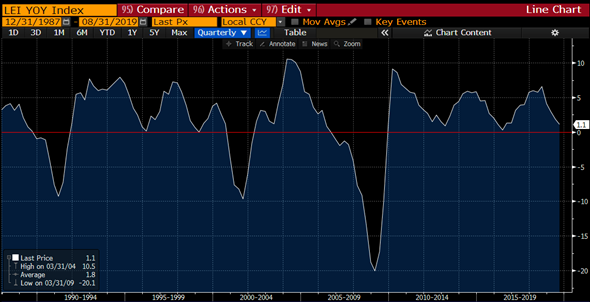 Of course, in theory the economy could nevertheless rebound from here without meaningful damage, just as it did in 1995. But September has helped to clarify not just where we are, but also where we are likely headed without a trade deal. Since the trade war emerged early last year, the US economy’s strength has stood-out among developed markets (chart below). Its resilience has been a story of strong consumer spending – driven by historically low unemployment – creating enough growth to outweigh a sharp contraction in manufacturing. 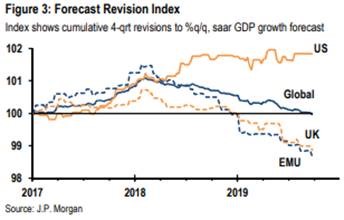 The health of the US consumer is therefore key to the economy’s ongoing resilience. Unfortunately, the US consumer took a hit on three fronts in September: 1) job creation data at the start of the month was lower than expected; 2) consumer confidence data released last week showed a sharp drop; and, 3) perhaps not surprisingly then, consumer spending data released this past Friday showed growth declining to virtually zero. While some of these data points can be noisy month-to-month, all three moving in the same direction simultaneously is arguably more than fake news.

When put in the context of a stock market trading at above-average valuations, and also an earnings season starting shortly that will include the impact of the Sep 1st tariffs, October seems to be set-up for its classic role of providing stock market fireworks. Further rate cuts by the Fed will provide some support for investor confidence; however, with a typical lag time of 18-months for rates cuts to stimulate actual economic activity the near-term impact will be minimal.

Hence the proper question boiling down whether a trade deal will happen fast enough to avert a recession, if a deal even happens at all. There is clearly no way to handicap the odds of this, particularly given the current White House Administration’s negotiating tactics to-date. The alternative then is simply to maintain the conservative positioning we have had since mid-May – overweight fixed income and underweight equities – while we wait for a market correction or a break-through on trade. If we do get a correction, it will be an opportunity to lean back into risk assets given the big picture backdrop of well-capitalized banks, still negative real interest rates and very low unemployment.