Divergence in the Bond and Equity Markets

The two future paths currently being predicted by bond and equity markets are close to mutually exclusive; and the old, New York trading-floor saying is “the smart money is in bonds”

In the previous update, we discussed an abruptly bearish change in the near-term outlook for global equities. The premise was (and is) that the sudden deterioration in US trade talks this month is more important than their ultimate outcome, because business confidence has been re-injured at a critical moment. The current economic set-up is highly susceptible to business confidence creating a negative feedback loop for growth (hesitant business spending = declining GDP data = further reduction in spending) and therefore the damage is now done, regardless of how trade negotiations are ultimately resolved.

Evidence of this can be seen in the May flash-PMI data below, showing that even as business output has stabilized through May (blue line), business expectations have resumed their decline to the lowest levels since the European debt crisis (orange line): 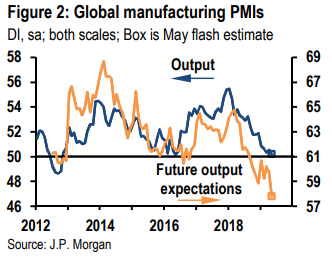 If the above thesis is correct, the past two weeks further exacerbated the situation: 1) blacklisting of Huawei by the US prompted China to threaten a retaliatory list of their own, including the launch today of an “investigation” of FedEx; and, 2) on Friday, the White House threatened Mexico with tariffs on all goods – starting in just 10 days from now – and lasting vaguely “until such time as illegal migrants coming through Mexico and into our country stop.”

Looking forward, indicators of investor fear are rising more notably in fixed income markets than in equities. For example, the US 10-year Treasury yield fell rather sharply during the past 10 days, hitting a level below that of the post-election “Trump Bump” in late 2016… 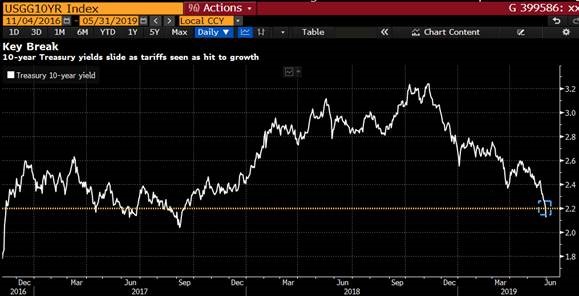 …and simultaneously the US yield curve shifted-down and further inverted relative to March, when the Fed first indicated that rate increases would stop. Markets are now pricing in a fully two rate-cuts by the Fed this year, which would represent a major pivot. 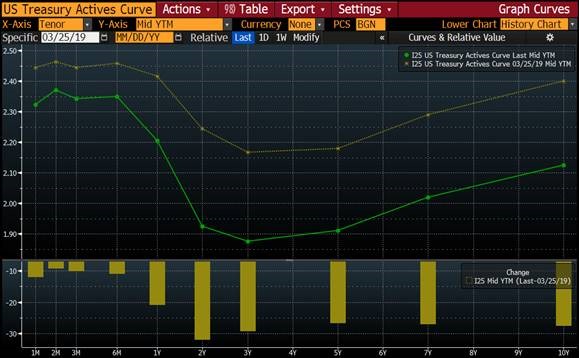 By contrast, despite the S&P’s 7% drop in May a major pivot has not yet occurred in equity markets. Consensus estimates continue to predict a significant second-half earnings recovery for 2019; to be precise, 15% earnings growth for H2 over H1, followed by a further 10% YoY gain in 2020. Qualitatively, that seems difficult with business confidence eroding and with rising tariffs affecting gross margins. 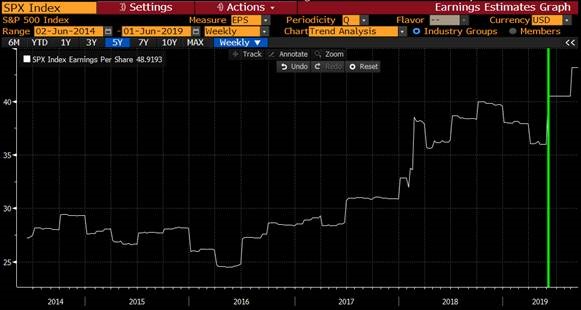 The two future paths currently being predicted by bond and equity markets are close to mutually exclusive; and the old, New York trading-floor saying is “the smart money is in bonds”. For context, let’s hypothetically say that bonds market are correct and as a result that: a) equity earnings stay flat in H2 2019 rather than growing 15%; and, b) that consensus growth expectations for 2020 are reduced to a more achievable 5%. That would imply the S&P is currently trading at an ~18x 2020e P/E (the market will be using 2020e by October), which would be higher than the fairly lofty, tax-cut-induced P/E levels of last summer. A more typical P/E level for a concerning-but-not-quite-recessionary period would be 14x – 15x, implying roughly 20% of downside from today’s prices for equities.