What started in January, hid under the covers through the summer and woke up for Thanksgiving finally went full bear from The Revenant on the stock market in December. [Editor: For a great write up on the work that bear science played in the bear attack scene in The Revenant, read this] The bear market is here.

In reality, 2018 has been a weak year for stocks around the world after we topped in late January. The new highs came in the US but the rest of the world never recovered and eventually the US turned over as well. It was jarring for two reasons; the point losses were a big number (because the markets are much higher now) and we had grown happy with a placid up market in 2017. This year only SEEMS extra volatile because the most recent example we have is of abnormally low volatility. The truth is that this is almost bang on the average for intra-year market action.

JP Morgan publishes one of the best collection of charts/data points in the quarterly Guide to the Markets. Every so often they add this graph which explains everything as clearly as you can. Since 1980 at some point in every year there was a time when then S&P 500 was negative. EVERY. YEAR. 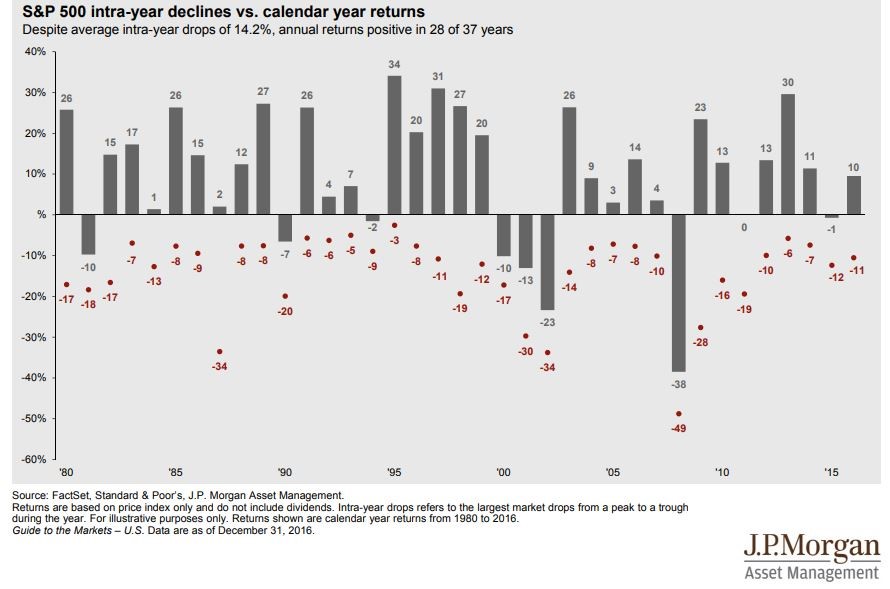 The trouble with humans and negative events is we desperately need an answer to what caused the negative event. In the case of a bear market, your investment portfolio is not as exciting as it was a few months ago. You feel the loss and your emotions push you to find something to change to avoid the pain in the future. “Breakups hurt so I am never dating again” is the love version of “bear markets hurt so I am only buying GICs”.

Conor Sen summarizes some great points about the causes of this bear market in this piece at Bloomberg. The reality is there is not just one reason for this market drop. There is never just one reason. The economy around the world is fine although we could always use more clarity on trade policy. We could definitely do with a clearer picture of Brexit and Italy’s debt issues. China could be managing their economy a bit better. Each of these issues was around last year too but in a Bull market bad news gets discounted and in a Bear market, bad news gets inflated. Right now every piece of bad news adds to the narrative that “things are bad”.

The most important thing to do in a bear market is to understand your own emotions and how they are playing you. When the Treasury Secretary tweets the below, resist the urge to run for the hills (admittedly it will be very tough when key political officials are doing dumb things like this!). Be patient, be prudent and most important of all- stick to your original planning. Next week I will even share a great tip to help take advantage of bad markets. 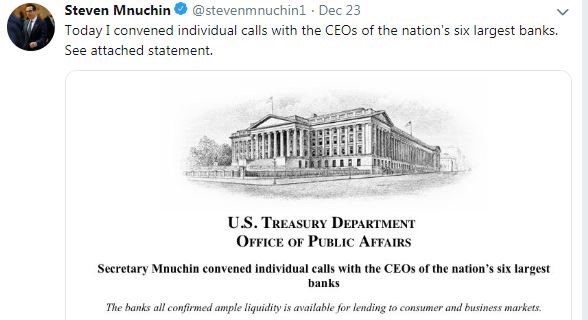