Ongoing omicron: What’s next for China?

Ongoing omicron: What’s next for China?

China’s economy has taken a hit from omicron’s spread. We look at the zero-COVID policy’s impact, and highlight implications for equity investors.

China is struggling to contain its most severe wave of COVID-19 infections since winter 2020. Areas with some form of lockdown encompass almost 25 percent of China’s economy. A strict lockdown was imposed on China’s largest and wealthiest city, Shanghai, and its 26 million residents on April 5.

The government thinks a zero-tolerance policy nationwide is necessary to prevent hospitals from becoming overwhelmed. The population has no natural immunity given previous waves have been relatively subdued. Vaccination booster rates are low with just 50 percent of the population having received a third shot, and just 20 percent for those over 80 years of age. Using China’s National Health Commission data and based on the current vaccination rates, we calculate it would take more than three months and seven months, respectively, to bring vaccination levels to above 70 percent for the two groups.

How long Shanghai remains in lockdown will be key to assessing the lockdown’s economic damage. The city of Shenzhen (population 17 million) emerged from a lockdown in March after just 10 days, having imposed a full lockdown when the first COVID-19 cases appeared. Given the Shanghai lockdown was imposed when cases were already soaring, it may take a few more weeks to completely lift the lockdown.

We believe cities have learned from Shenzhen’s and Shanghai’s experiences, and are likely to double down on pandemic control as soon as initial cases are reported to minimize the time required to remain in lockdown.

Although some top health scientists admitted recently the country cannot maintain the zero-tolerance policy forever, we think China may choose to remain resolute in the near term. The policy has worked well in the past two years as China incurred the lowest COVID-19 mortality rate of any large country. Moreover, RBC Global Asset Management Inc. Chief Economist Eric Lascelles points out that a massive outbreak would not be a good look just before President Xi Jinping seeks a third term from the 20th Congress of the Communist Party this fall.

Signs suggesting the lockdowns are disrupting the economy are appearing. Q1 2022 GDP pointed to still-moderate growth of 4.8 percent year over year, but given the impact of the latest omicron wave only came late last month, it is not fully reflected in the Q1 GDP data.

Weak domestic demand led Q1 2022 retail sales to fall more than three percent year over year and imports to contract in March as lockdowns hampered freight arrivals. Imports of major industrial metals, including iron ore and copper, slowed particularly. Lower Chinese demand for these commodities could give some much-needed respite to their prices.

Without a major overhaul of quarantine rules, the economic damage due to omicron will likely increase. Premier Li Keqiang has repeatedly warned of growth risks this month, and the State Council and related government departments have ordered local authorities to minimize transportation and logistics disruptions when imposing local quarantines. 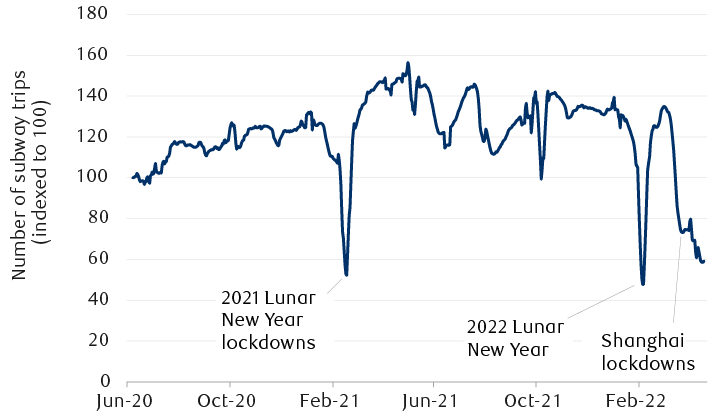 We expect policymakers to step up policy stimulus to cushion growth pressures. On April 15, the People’s Bank of China (PBoC) cut its reserve requirement ratio (RRR) by 25 basis points for all banks and 50 basis points for certain small banks. These are smaller than the typical cuts of 50 or 100 basis points, perhaps due to weak credit demand and concerns regarding the inflation outlook. We think the RRR cuts may not be enough to revive the economy. Consumer spending is likely to retreat due to lockdowns, and individuals are likely to prefer to save given uncertain times. Therefore, we also expect policymakers to step up policy stimulus.

We think further tax cuts, city-level housing policy relaxations, and a pandemic relief package for COVID-19-sensitive industries and small and medium-sized enterprises are likely. We also expect more state-sponsored infrastructure development as Beijing continues to encourage local governments to front-load construction, and has granted provinces their full allocation of special bonds to be used for infrastructure investment. In fact, fixed asset investments grew more than nine percent year over year in Q1 2022 as a result.

RBC Global Asset Management maintains a growth forecast of less than five percent for 2022, compared to the official 5.5 percent growth target, largely due to the expected damage from COVID-19 lockdowns and a global pivot to services from Chinese-produced goods. Risk is skewed to the downside.

Domestic logistics and port operations disruptions may spill over to regional or global supply chains. In addition, some cities under lockdown in southern and eastern China are manufacturing hubs for electronic products, chips, and electric vehicles. Exports are likely to slow more meaningfully in the coming months.

Moreover, global companies are likely to increasingly diversify their supply chains out of China. According to a March survey by the American Chamber of Commerce in China, 49 percent of the respondents intend to reduce their investment if China’s current COVID-19 restrictions remain in place into next year. The attraction of low manufacturing costs is being eclipsed by an increasing focus on ensuring critical materials and technologies are always available.

An opportunity could emerge

The MSCI China consensus earnings growth estimate, which has been revised down since early March, stands at 15 percent year over year for 2022. However, because the omicron variant’s impact is still hard to predict, the projection may be downgraded further as more companies factor in the impact of the outbreak. This will likely weigh on equities in the short term.

The uncertainty currently surrounding China equities seems to be mostly discounted in valuations which are depressed relative to both historical averages and global peers. The MSCI China Index is currently trading at 10.5x the forward 12-month consensus earnings estimate vs. its 15.8x five-year average.

This may present an opportunity. China is the only major global economy widely expected to loosen its monetary policy this year, and stocks typically rebound very quickly from depressed levels when monetary and fiscal stimulus kick in.

Within the Chinese equity universe, infrastructure-related sectors, such as construction, building materials, and energy and commodity-related stocks could outperform, as could sectors focusing on high-end manufacturing, such as those in the electric vehicle value chain and semiconductor-related companies. 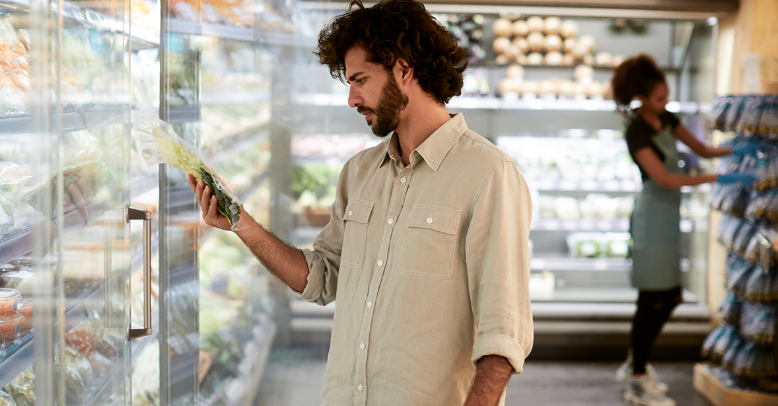 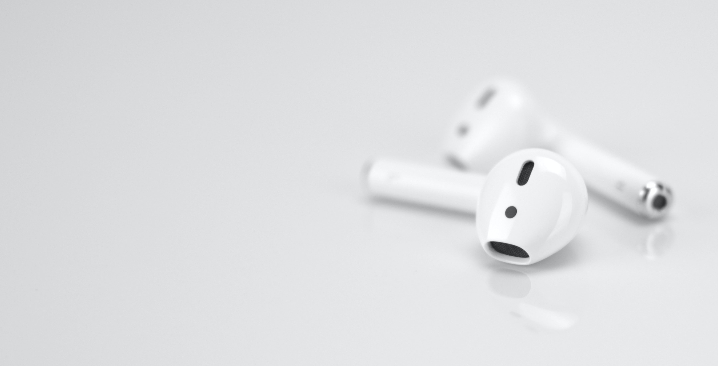 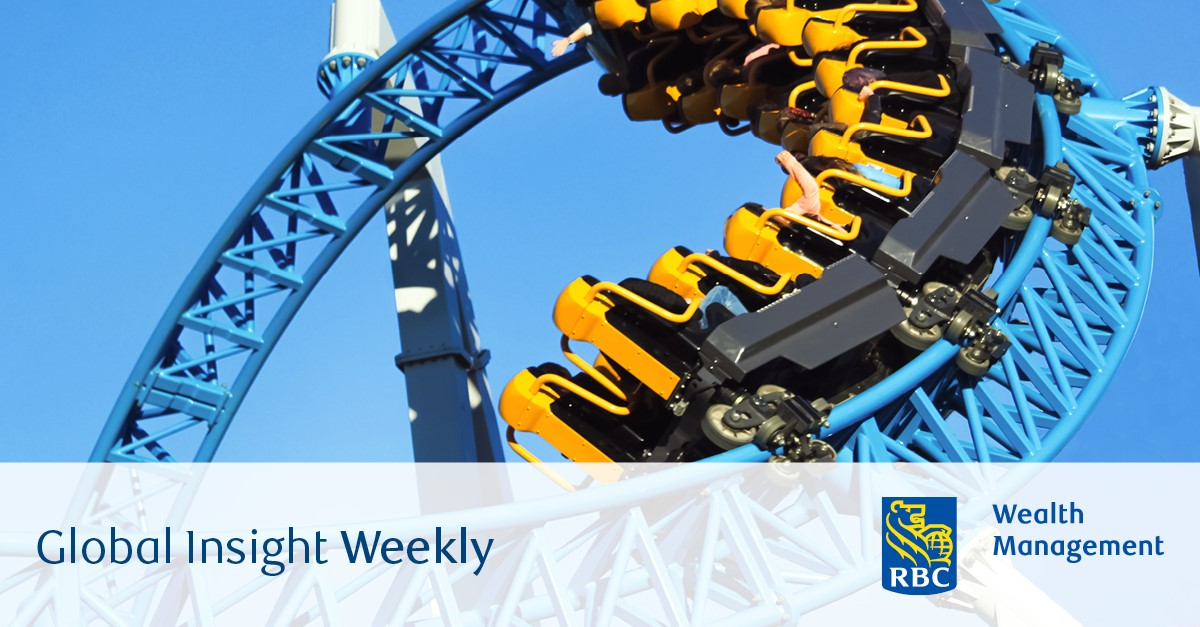