Throughout the September to end of November global stock market turmoil there was a good chart “signature” that gave me confidence that nothing drastic on the downside was likely to happen to stock prices.

The trading last week invalidated the pattern I was basing my “bottom thesis” upon and, therefore, leaves me with no technical opinion about where stock prices are likely to go in the short term.

The Fast TEAM model was stopped out of its positions at a 1% loss on Thursday.

The balance of the weekly comment considers some economic fundamental charts and considers the case that MAYBE the interest rate increases to date have already caused the economy to slow to where the central banks will have to actually return to a Quantitative Easing (QE) plan.

Let’s view a number of charts and consider what they are telling us. 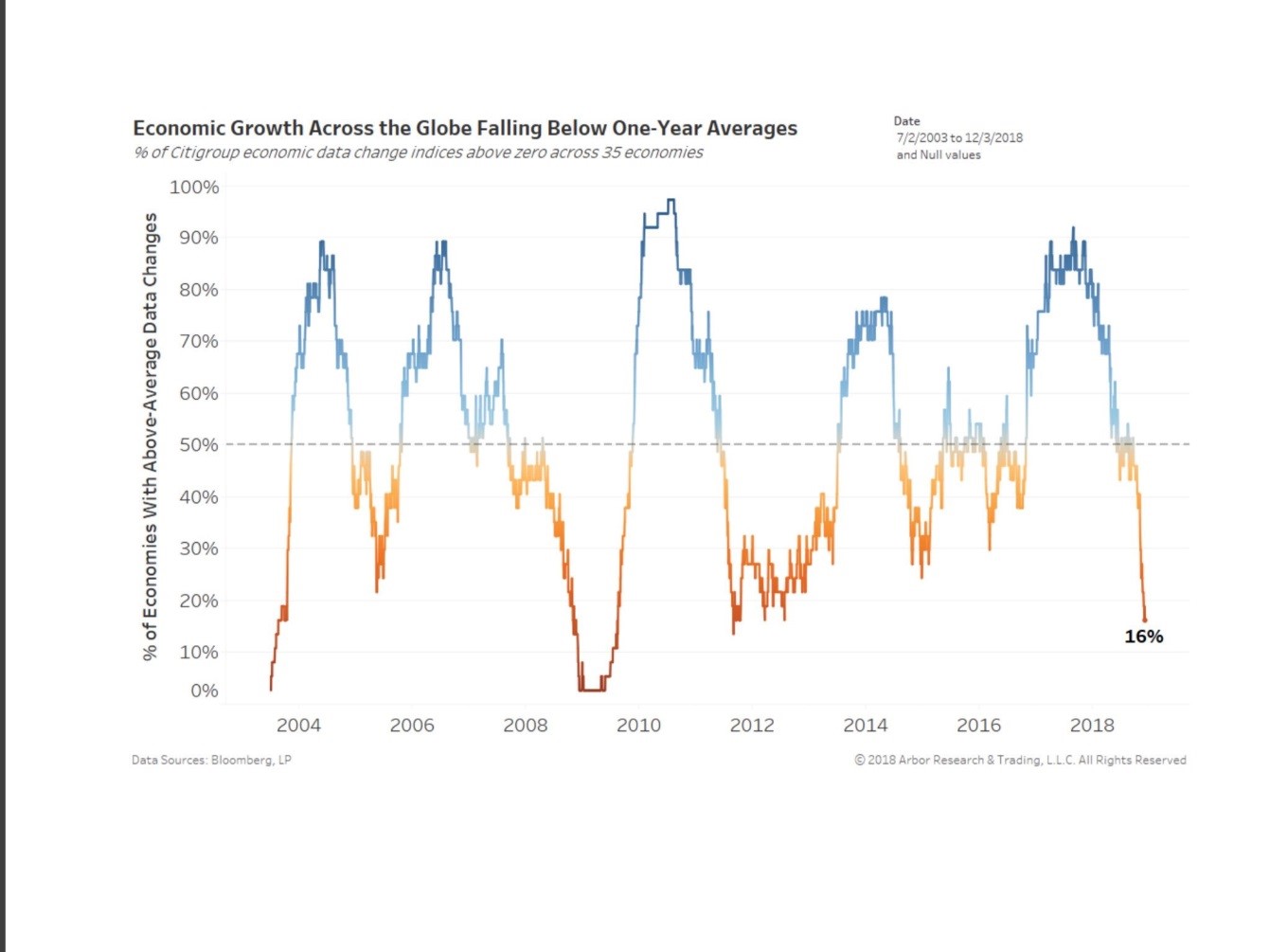 The chart above simply states that economic growth across the globe has decelerated quickly. Nine of the 13 countries used in the survey for economic activity actually use the word “QUICKLY” with Japan, Italy, Germany, Sweden and Switzerland all showing negative growth in the third quarter of 2018.

For the US specifically, the next chart shows the growth rate in the “Leading Economic Index.” Note: it went negative in October. 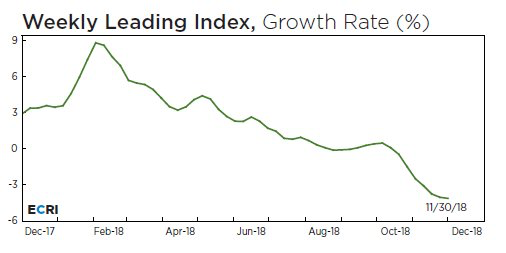 The next chart shown is auto sales in Canada. 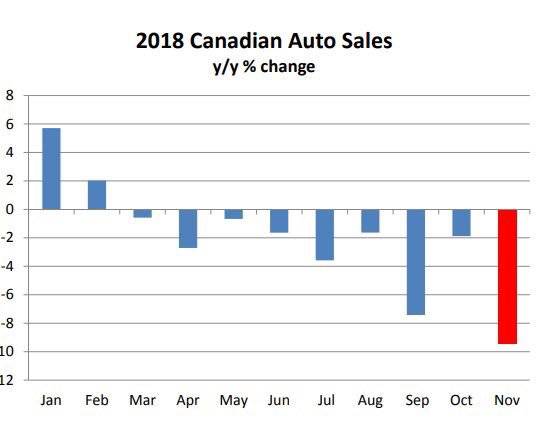 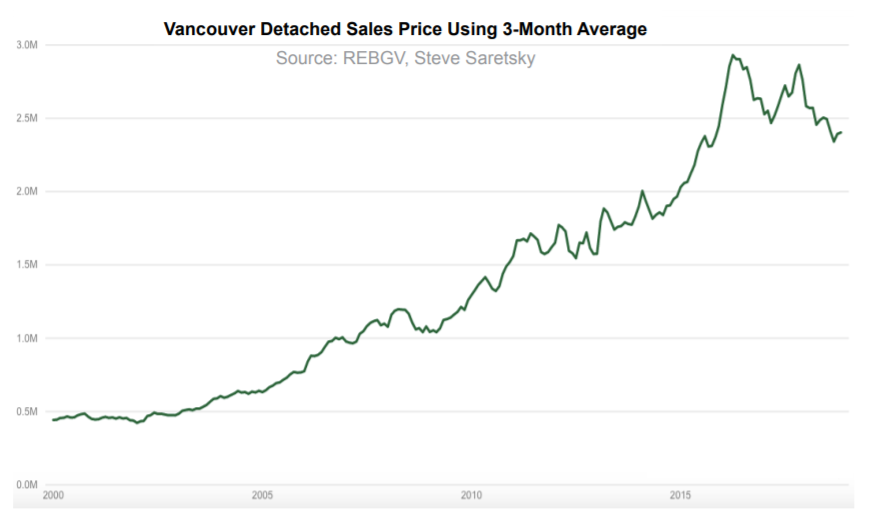 Even Nanaimo single family homes have finally turned down after a year of weak sales volume. 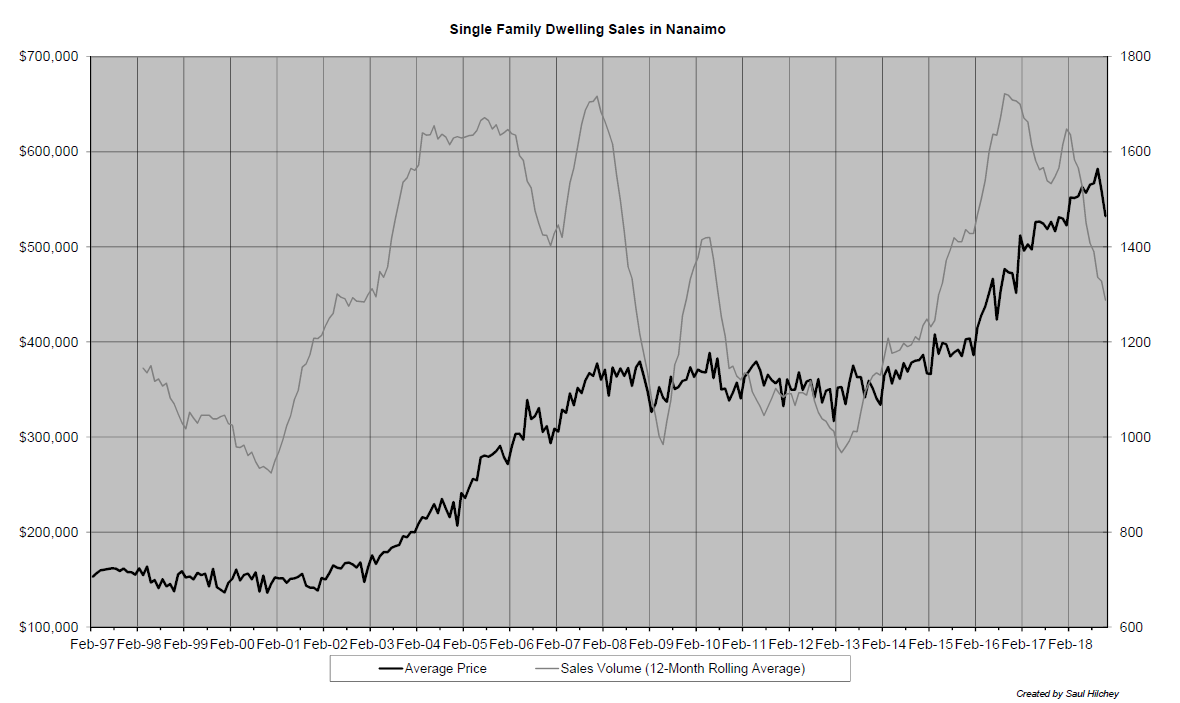 Declining auto sales and a slowing housing market together, make for strong evidence for a slowing Canadian economy.

Add to that combination oil market declines, layoffs at Bombardier and General Motors, and the new wrinkle of the Huawei CFO arrest, and you get a fragile economic environment for Canada.

Ok Nick…I get it. The economy is slowing. But that should not be a surprise after all the stimulus of the last 10 years is finally wearing off. Isn’t that a good thing?

Honestly, that is the toughest question to answer about all.

If a “soft landing” can be orchestrated and asset prices could just “flatten out,” it would give the real economy a chance to catch up to the financial economy. Wages could gradually rise and people could AFFORD to pay today’s expensive prices for stocks and houses.

The trouble is, a soft landing is a tough thing to accomplish in the screwed up financial world left behind after a long period of negative interest rates and overly indebted governments, corporations, and citizens.

The next two charts, by Doug Short at Crestmont Research, both pertain to the S&P 500 in the US and make the point that American stocks are expensive. 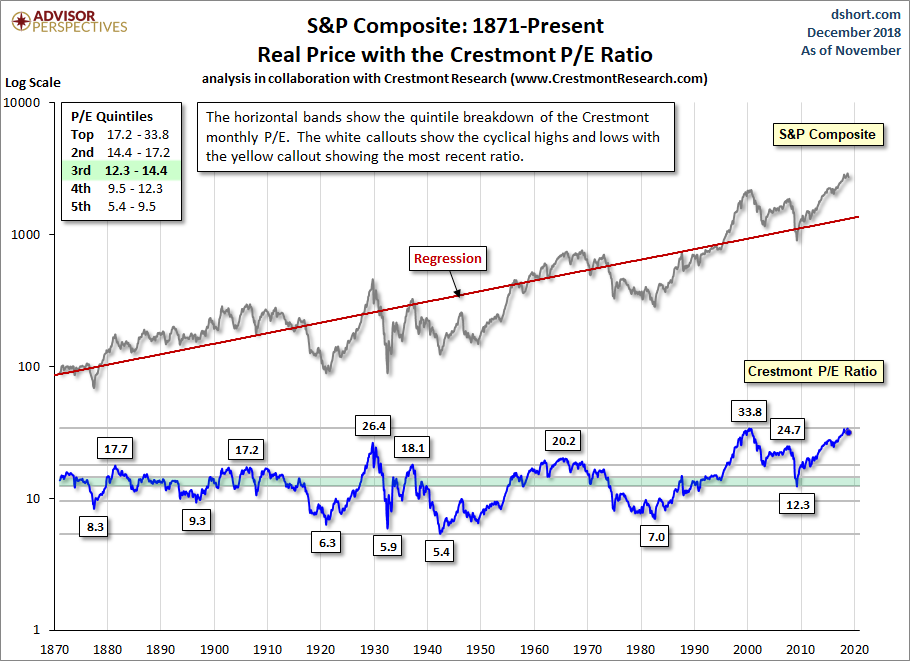 In the first chart, notice the grey “S&P 500 Composite” line is historically far above the red “regression line.” Also notice the blue Crestmont P/E Ratio line is near an all-time high as well.

The chart above is complicated. Therefore, the simple version of the data above is show below. Here we view the arithmetic mean for the S&P 500 P/E ratio.

Easy to see this number is high relative to history. 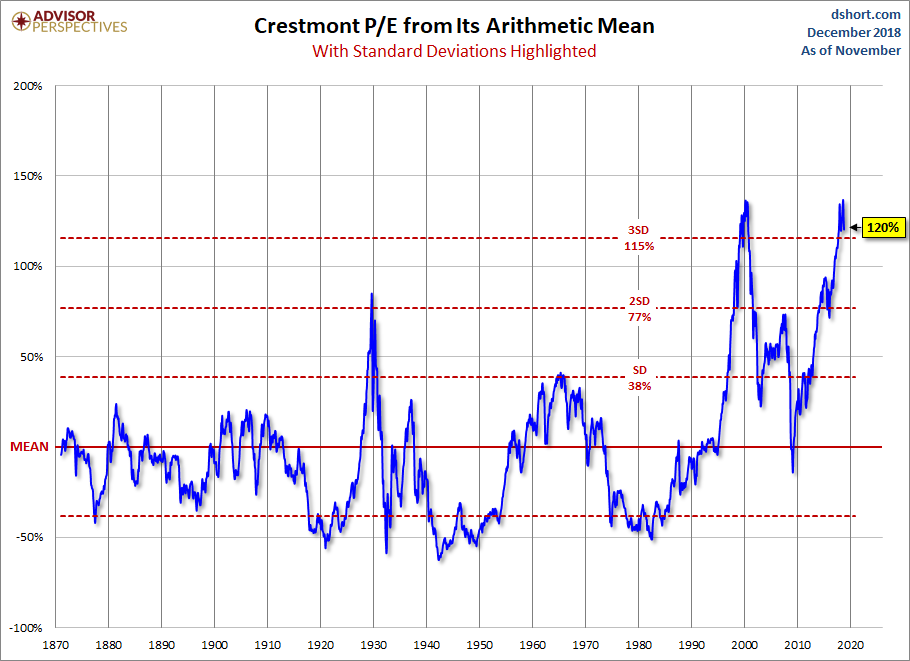 The longest running financial newsletter in history, the Dow Theory Letter was started in 1958, by Richard Russell. For almost 20 years, I subscribed to his newsletter and genuinely believe he should be in the “financial hall of fame,” and can guarantee that I would still be a subscriber if he were alive.

This may be one of those moments.

Rather than looking at stock prices, this weekly editorial is asking the question “has the real economy slowed enough to stop interest rate increases by the US and Canadian central banks?”

The correct answer is “we don’t know.”

What we do know is that the US Federal Reserve is NOT going to change from an outlook of five interest rate increases (one in December 2018 and four in 2019) to Quantitative Easing in a heartbeat.

The Fed would REALLY panic the markets if they made that drastic of change overnight.

The Fed will raise interest rates at the December meeting.

They will likely back away from the four rate hikes in 2019, and consider something like two, which are “data dependent.”

The earliest a QE type signal will come for the US Fed is February 2019. Most likely it will be later than that.

So here is the “think about it” part of this comment.

I have no doubt that stock markets will rip to the upside once the Fed shifts back to QE. The challenge will be that the markets will also know the Fed did not raise interest rates nearly as high as they would have liked before returning to QE.

With that knowledge will markets trust another round of QE to be a great solution to asset price declines like they trusted the past rounds of QE? Or will they perceive the central banks to be trapped in their own policy quagmire.

The magnitude of the QE rally that takes place in 2019 is going to be absolutely imperative to closely monitor. We want to be fully invested in that rally after the QE announcement is made. Patience is key.

I think that is enough forward looking statements for this week. Let’s see if the markets can rally into the end of the year to get back into their trading ranges.

When viewed from a year-to-year perspective, nothing is cheap and speculation is running rampant.

If you don’t balance your risk tolerance to your portfolio you will end up stressed and selling.