One of the investment challenges that I believe will start getting more attention is how multinational firms (mostly North American) will continue to access and grow in China. In the 1950s, over 90% of the global middle class resided in Europe and North America. Today, over 20% live in China. China is experiencing the fastest expansion of the middle class the world has ever seen.

This presents a lot of unknowns and a lot of opportunities:

China has become the world’s largest car producer. 20% of Apple’s iPhone sales are in China, the world’s largest smartphone market, where over 40% of all smartphones are sold. Over 90% of Chinese own their own home. 70% of millennials in China own their own home (compared to only 35% in the U.S.). Generation Z accounts for 15% of all spending in China, compared to 4% in the U.S.

To be sure, the gap between China’s middle-class market size and that of other countries is only set to expand as China continues to enjoy more rapid economic growth than any other major economy. 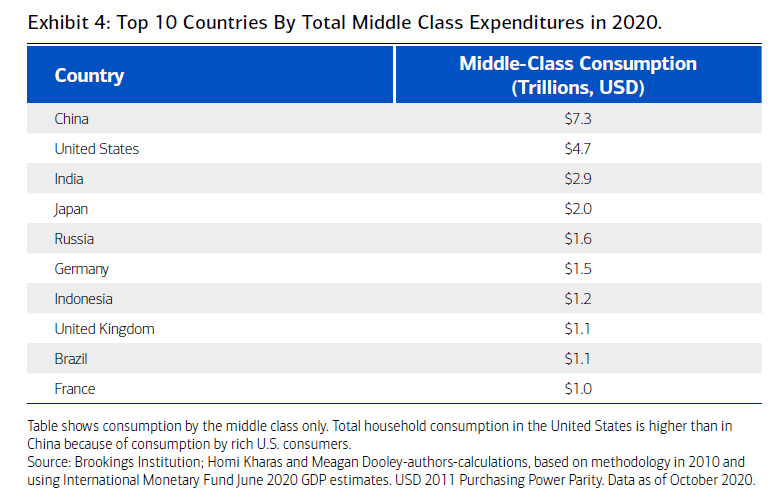 This has significant challenges, not only for the traditional International firms that want to continue to sell into the single largest and growing market globally but also in terms of how China’s home-grown companies emerge as global competitors. China has emerged as a leader in e-commerce, fintech, and social networking platforms, driven by tech giants like Alibaba and Tencent. This has transformed its economy:

What happens in the next few years with trade agreements with China matters, therefore a lot. The top 20 U.S. firms had sales in China of $160 billion last year. Perpetual Trade Wars won’t bring growing mutual prosperity. As investors, we can’t ignore the Chinese middle class's sheer size or that its power and influence are here to stay.

While as an investment strategy, I don’t advocate this: but it pays to have friends in some cases. I wonder who was 15th on George Clooney’s list! (Link) How many of us would be able to come up with 14 friends to do the same?