In a recent survey performed by RBC Capital Markets, a greater percentage of institutional investors were concerned about the 2020 US elections (73%) compared to a second wave of Covid infections (67%). For this reason, we continue our deep dive into the elections and the impact it could have on markets.

In the past 100 years, there have been 25 presidential elections, and seven have overlapped with a recession. We track statistics like this because recessions have historically been unkind to the incumbent political parties. In those seven elections that overlapped a recession, five of them resulted in the White House changing hands. In this blog, we look at the three most likely election outcomes and analyze their potential impact on the economy, markets, and specific industries.

Outcome 1: Trump is re-elected with a divided congress

This first outcome assumes the status quo – President Trump is re-elected for a second term, the Senate is led by the Republicans and the Democrats control the House of Representatives.

Should this occur, the policies enacted by Trump’s administration over his recent term would likely remain, including the individual and corporate tax cuts. Keeping taxes low in a recessionary environment would help support economic recovery, however rising deficits and debt could impair the long term prospects of the economy. Be that as it may, in the short term, the administration’s focus would continue to be on growing the economy, creating jobs, furthering business deregulation, and passing an infrastructure bill. In the last four years, the market has reacted favorably higher to this approach. However, in the spotlight will be Trump’s antagonistic approach towards China which may intensify and create volatility for equity markets and those multinational companies that have significant business in China.

In the second outcome, Biden takes the presidential seat with Democratic control in the House of Representatives and the Republicans leading the Senate.

Biden’s proposed policy includes reversing various Trump administration policies like the tax structure. The top tax rate would likely be raised, and companies paying little to no tax would be required to pay a minimum tax rate. Furthermore, higher income earning individuals would face an increase in taxes and a reduction in their deductions. Other initiatives in his agenda include climate change policies that increase the use of renewable energy sources, expanding immigration policies, and increasing multilateral trade deals.

However, we expect Biden’s policy changes to have a minimal effect on financial markets due to the Republican control of the Senate. The filibuster rule, which requires a supermajority of 60 out of 100 votes to pass legislation, would act as a barrier to the implementation of Biden’s agenda. Therefore, the RBC US Equity team views this scenario as unlikely to create large changes and hence will have a neutral impact on financial markets.

Biden’s platforms impact each sector in a different manner. According to RBC analysts, a Biden win should drive investors towards defensive and secular growth-oriented sectors, and to veer away from cyclical and value-oriented sectors. See chart below 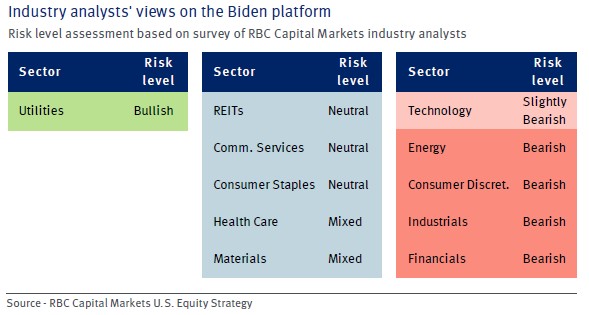 In the last outcome, Biden takes the presidential seat and the Democrats control the House and lead the Senate.

In this scenario, barriers to passing legislation would be greatly reduced with Democrats controlling both the House and the Senate. While the filibuster rule would still be in place, it would be easier to garner the required supermajority of 60 votes as only a small group of Republicans would need to be persuaded. There has even been discussion regarding whether a Democratic blue wave would eliminate the filibuster rule, thereby requiring only 50 votes (plus the vice president’s tiebreaker) to pass legislation. This would be a tremendous change as the filibuster rule has been present since 1837 and has been useful in ensuring that major policy changes have some bipartisan support. In addition, there are longer-term risks of retaliation from the Republicans in the future should they regain control.

If the Senate filibuster rule is eliminated, equity markets could react negatively as it increases the likelihood of changing tax policies for corporations and upper income earners which can negatively impact corporate earnings and aggregate demand. As RBC Wealth Management estimates in the chart below, the S&P500 earnings recovery in 2021 would be held back if corporate taxes are raised. With that said, it can be argued that greater fiscal spending from the Biden Administration could partly offset some of the economic pressure. 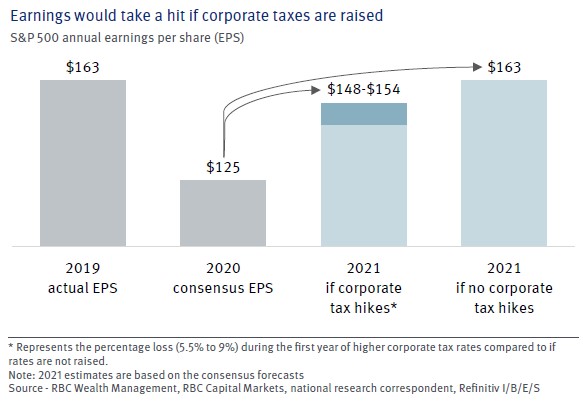 Ultimately, the current consensus views a Biden victory to be a bearish outcome for the market. Historically, when measuring the short term S&P500 performance from election day to the end of the year, investors have experienced lower returns from a Democratic Presidency relative to a Republican Presidency. However, overall, as our previous blog has mentioned, stocks have trended higher over time regardless of which party was in office. A deeper dive in the chart below makes the distinction as to the average return that was experienced relative to a particular mix of government. It is interesting to note that a Democratic President with a Split Congress (Outcome 2) and a Democratic Sweep (Outcome 3) has yielded better returns than the status quo of Republican President with a Split congress (Outcome 1). Whatever the outcome, election years can be volatile and therefore serve as an event for investors to re-evaluate their investment time horizon and ability to take risks. 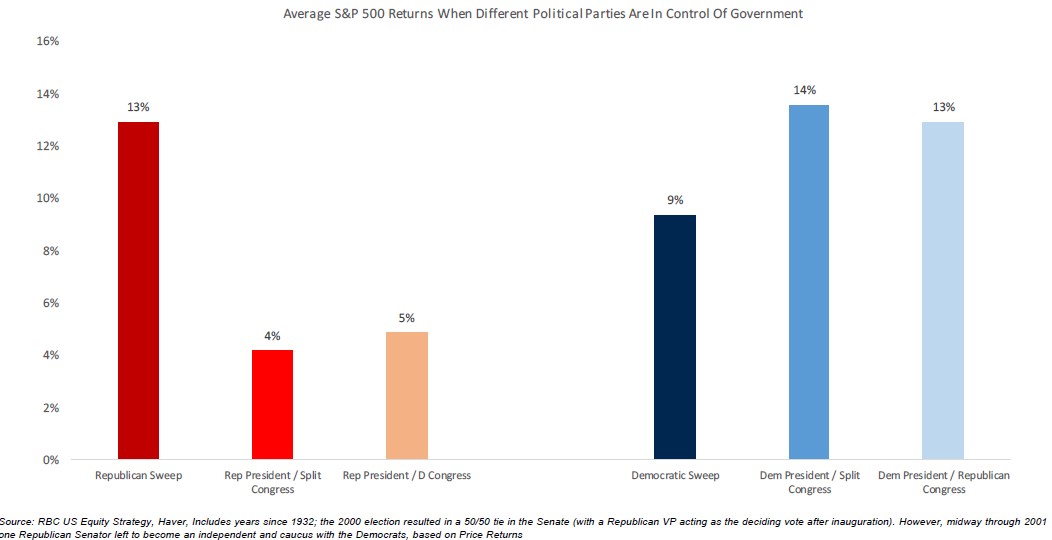 Impeachment Risk and What it Means for the Economy

What are the odds of a Presidential impeachment, and what would it mean for investors?

Is it too late to buy gold?