Exploring the long term impact on markets from Elections

Over the course of my profession, I have noticed that some clients start to get jittery every time an election looms, and this year is no different.

­­I tell my clients that political uncertainty does affect the market sentiment, but only in the short term. Once an election outcome is known, the fundamentals once again become the most influential factors.

These fundamentals include the following:

We know now that earnings, in general, this year have been resilient, despite the COVID-19 pandemic. Surely, some sectors such as tourism have been negatively affected; but other industries have boomed.

Going into this election, we know that liquid investments don’t offer an attractive alternative, given the current historically low-interest rates (10-year Government of Canada 0.53%, 10-year US Treasuries 0.61%). Is the market overly bubbly? I don’t think so. In fact, the last 12-year bull market is named the “most hated” bull market because it has been interrupted by numerous disarming events. Investors have constantly been bombarded by “bad news” and reluctant to get back in the stock market. That’s probably why investors are holding onto “the biggest pile of cash ever” as the Wall Street Journal puts it (close to $4.6 trillion).

According to research done by Capital Group, it does not matter much which party is in power over the long term. As can be seen in the chart below, regardless of which party won the White House, in 18 of 19 elections, a hypothetical $10,000 investment made at the beginning of each election year would have gained value 10 years later. The only negative 10-year period followed the election of George W. Bush in the year 2000, amid the 2000 dot-com crash, and the 2008 global financial crisis. 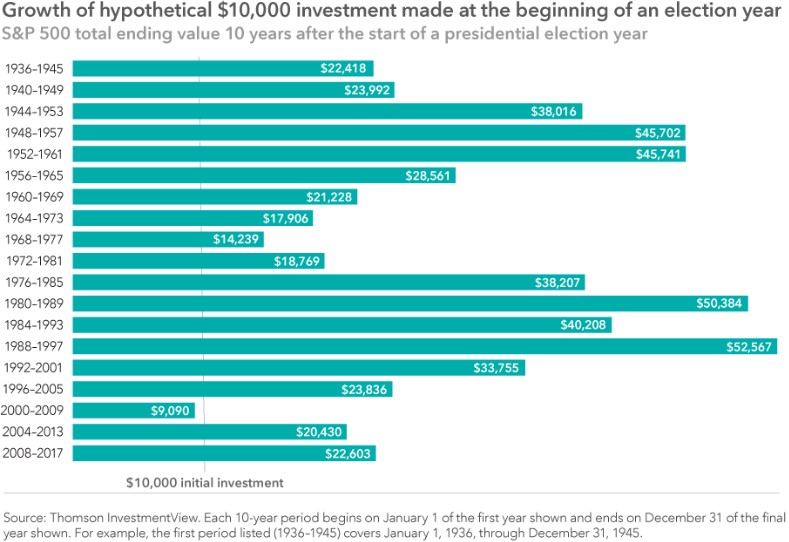 The market always hates uncertainty, and that creates volatility. Once it becomes less uncertain, most factors will have been priced in, including the bad news. Therefore, investors should not worry too much about who will win the election. In the chart below, one can see how agnostic the market performance is to which party occupies the White House. The market may fluctuate leading up to the election and shortly thereafter; however, in the long term, the market cares more about the fundamentals. 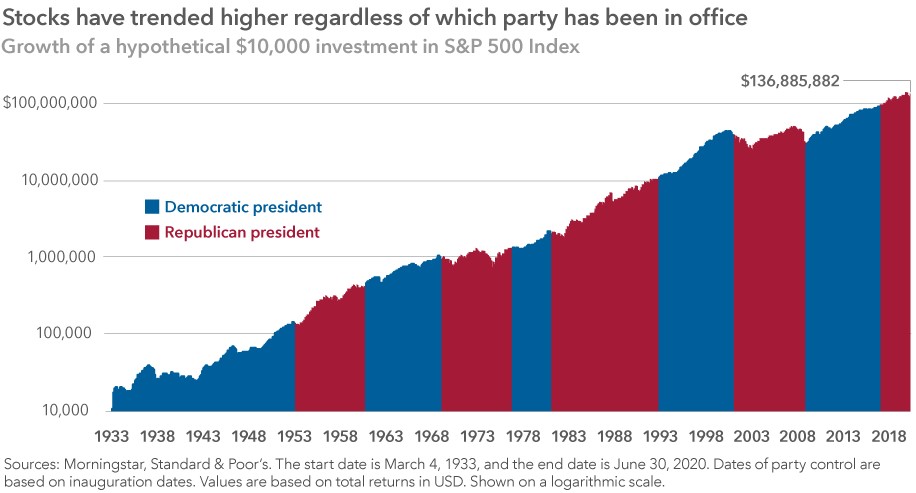 Remember when Donald Trump claimed victory on Nov 8, 2016? The market went into panic mode overnight because it did not expect a Trump Victory. Dow (futures) dropped almost 800 points, only to gain 257 points the day after, and closed at 18,589.69, after Trump made his acceptance speech! As of the day this article was written (Aug 18, 2020), the Dow closed at 27,810.91. Stay invested for the long term, and you will be the winner, regardless of who wins or loses the election!

Who Should Be My Executor?

6 tips on how to choose the best fit

Is It Too Early To Sell My Biggest Winners?