Green shoots of a V-shape recovery in spending

With consumer spending making up roughly 60 to 70% of GDP in Canada and the US, consumers effectively carry the state of their country’s economy on their backs. As a result, investors monitor the health, confidence and spending trends of consumers to guide their macro and fundamental analysis. With stay-at-home orders and the enduring uncertainty surrounding COVID-19, it was of no surprise to see consumer spending fall dramatically.

The latest Bank of America credit card data shows that total customer credit card spending fell as low as -40% Year-over-Year (YoY) in March. The Royal Bank of Canada Data & Analytics team reported similar numbers with a -37.5% YoY drop in debit and credit card spending at the end of March. The loan books of the big 6 Canadian banks also pointed towards a weaker consumer with significant loan deferrals being granted (see chart below). Taken all together, the prospects for a North American economy that depends on the consumer appeared bleak. 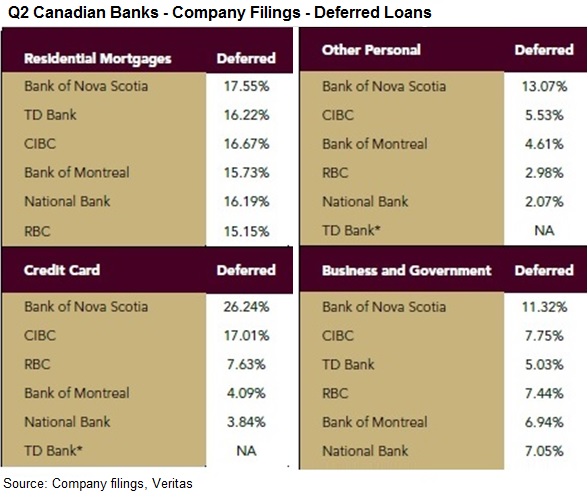 To the surprise of investors, the latest reports from Bank of America and RBC showed a near V-shape recovery in overall card volume spend.

In Chart1 below, Bank of America’s retail sales excluding auto is already flat on YoY levels. Even when taking auto sales into consideration, spending is only down -10%. RBC shows a similar recovery in card spending, with levels nearly back to normal by June. 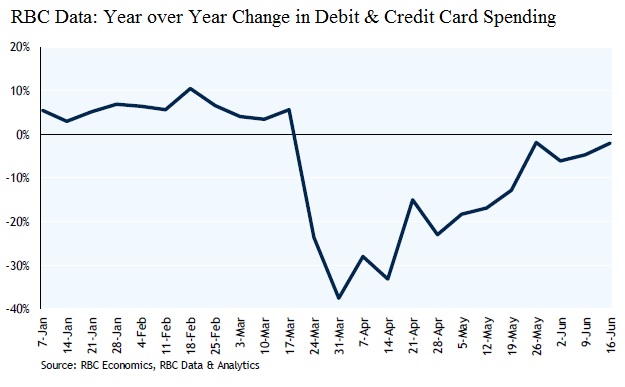 As shown in Chart 2, Bank of America’s report shows that certain sectors experienced increased spending, notably in furniture, groceries, home improvement and online retail. These spending trends were seen consistently amongst states that are ‘mostly –opened’ (eg. GA, AZ, FL) and the ‘least-opened’ states (eg. NY, NJ, MA). This data points to the ongoing de-urbanization trend that is seen in the United States, where demand for homes in rural areas have increased due to Covid and the Work-From-Home economy. The increase in online retail spend across all states also points to a transition in e-commerce spending behavior that is becoming more entrenched.

On the surface, it is evident that consumers have been limited in their ability and willingness to spend on entertainment, restaurants and clothing. One’s initial reaction could be to conclude that both spending and the economy would suffer. However, what the above chart suggests is that money is simply rotating and being spent in different sectors. In other words, perhaps one’s travel budget has now turned into a kitchen renovation budget. We have commented in previous blogs that the immense fiscal stimulus from North American governments had the goal of maintaining the purchasing power of consumers. So far, with this initial V-shape recovery in spending, it appears that spending has been well supported. It also signifies the importance of the government stimulus cheques and perhaps there is a need to extend them later this summer. It is too early to say that consumers and the economy are out of the woods. Afterall, Covid cases are on the rise, which can alter the trajectory of the charts above. Investors still face a thorny environment where banks expect greater loan defaults and unemployment may remain stubbornly high. That being said, it appears that amongst these weeds are green shoots that indicate a gradual recovery is within reach.

For Canadian tourism, Canadians matter most

Audio commentary: Checking in on Internet trends with Mark Mahaney

Have we seen the bottom of the bear market?