What do the Bulls see that I don't?

What do the Bulls see that I don't?

Reviewing what is driving the market

We have created a Video Blog for this post. If you prefer to watch or listen to the content, you may access it HERE. *When prompted, enter the password: SoWealthGroup2020. The video summarizes all the charts and information below.

The market has staged an impressive recovery from the March lows, leaving some investors dumfounded at the apparent dislocation between the stock market and the economy. Although some US states began reopening their economies, the month of May can hardly be considered a success with US jobless claims above 40 million and US bankruptcy filings printing the highest level since the 2009 financial crisis (see chart below). With the uncertainty as to whether North America will experience a ‘second wave’, some investors remain tepid to fully commit to a stock market that does not appear to reflect the economic malaise that we see and hear. 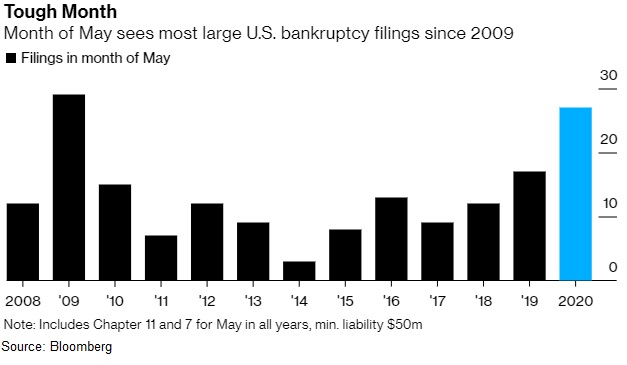 So what is going on? In this blog, we aim to review some of the narratives and charts that the investment community have been discussing which could be driving the markets higher.

The number of daily Covid cases in the US is down to 18,719 (May 25). This is not the lowest print we have seen (17,653 on May 11), however, it is impressive considering testing has increased +60% in the past month to a new high of ~495,000. The amount of tests showing up ‘positive’ for Covid (aka. positivity rate) has also fallen to a new low of 3.8%. Taken all together, the downward trend continues to be a positive development in this health crisis. 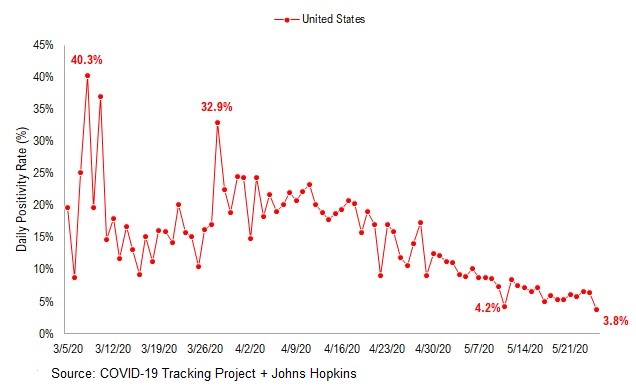 Although there continues to be skepticism in some circles surrounding the readiness to reopen the economy, it is important to note that 13 states have been open prior to May 1. Each state has reopened to different degrees, however, none have displayed a sustained rise in cases. Rather, daily cases have fallen by 29%. This is an encouraging data point for those hoping that a reopening can be done safely. 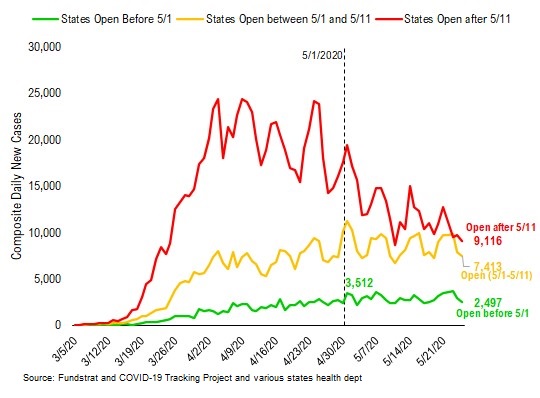 Finally, the vaccine news flow, has also provided a lift in investor sentiment. There are now 10 vaccine candidates in clinical evaluation and 114 candidates in pre-clinical evaluation. Although there are no guarantees that a vaccine will be found soon, the enormous global efforts at finding a vaccine is a sign of positive progress. Beyond vaccine information, scientist are working around the clock to learn more about the disease. The Korean CDC recently announced a study that showed there was no re-infection for any recovered patient in Korea and suggest immunity can be achieved.

There has been some encouraging studies published that suggest the economic impact may not be as severe as originally assumed. The St Louis Fed, one of the 12 Reserve Banks that make up the US Central Bank, looked at the "simulated" impact on consumer spending from the pandemic. They believe consumer spending will fall 3.3% which may seem less than expected when you consider an unemployment rate of +20%. Research firm, Fundstrat, believes the primary explanation could be found in the lower median income of those unemployed. They report that “the US median income is ~$63,000 and the median income of the 20 industries reporting the largest job losses is $35,000, or about half”. In comparison, the Great Financial Crisis (2008-2009) that resulted in 10% unemployment, could have a greater economic impact given the higher median income of the industries impacted. 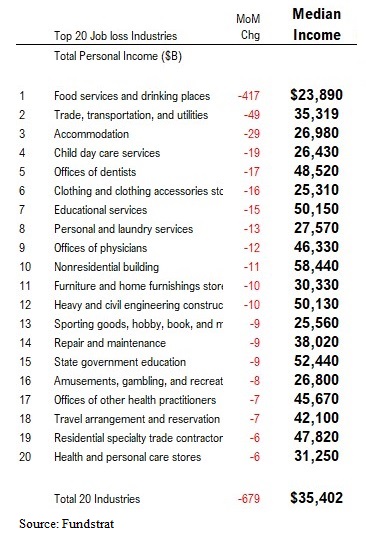 Goldman Sachs economics team has also opined that the Federal unemployment benefit has the ability to fully offset lost wages in many of the industries listed above. Their study also forecasted that the benefit would lead to an actual rise in consumer disposable income in the second and third quarter of this year. In all, investors should not underestimate the impact of the aid provided by Congress. According to the New York Fed, “Some businesses have already made efforts to recall laid off workers…. [but] this has been challenging with many unemployed workers reluctant to return to work – some attributed this to generous unemployment benefits…”. In all, the $600/week unemployment benefit has produced a major buffer to the consumer buying power for the next 6 months. Hence, the economy may be more resilient in the second half of 2020 than one would expect.

The Great Financial Crisis (GFC) of 2008-09 has provided a key lesson to investors. Investing through that period, we saw the power of operating leverage, where earnings can rise to new highs without an increase in revenues. During the GFC, five sectors re-attained their all-time high in operating income with less revenues. For example, the Consumer Discretionary sectors were able to reach record operating income with 13% less sales. (See chart below) During recessionary periods, corporations are quick to reduce inefficiencies, implement more productive technology and reduce costs. Should we see this same pattern in 2020, corporate earnings could recover sooner than expected, which would be constructive for stock prices. 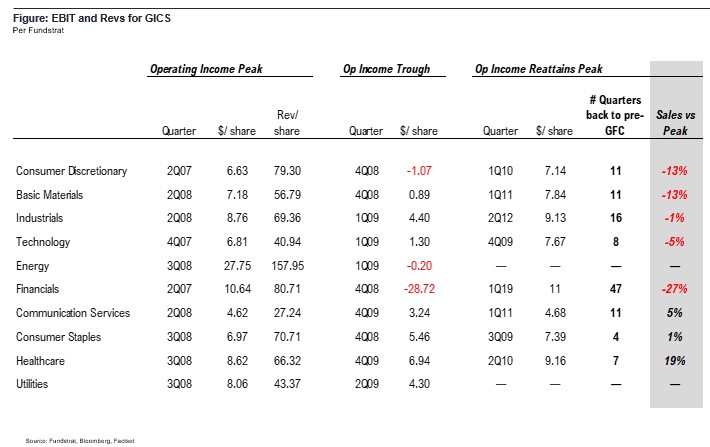 There is currently an elevated amount of cash and money markets between retail, institutional and private equity investors. When totaled, there is roughly $6.8 trillion that will need to find an eventual home for investment. With interest rates near rock bottom levels, the equity markets could become a benefactor of fund flows. This dollar figure is tremendous and represents 32% of the US GDP. Should markets face another correction in the short term, one could expect some of this cash to be reinvested to support the market.

Taken all together, the narrative that the market seems to be focusing on is one of better health data, and an economic and corporate earnings recovery that could be better than expected. Furthermore, the combination of government stimulus with the significant cash on the sidelines also encourages investors to not get too pessimistic. With all this said, investors need to be cautious and recognize that the facts can change, and one should be open to changing their minds. The market is currently valued at 18.9X Forward PE, which is a premium to the 20 year average of 15X. Therefore, the market is not cheap and investors should proceed with caution. The recent riots across America and resumed tensions between the US and China could trigger some profit taking. After a strong recovery over the last two months, investors should review their accounts with their advisors and potentially rebalance portfolios to manage unexpected volatility.

Can I Claim Home Office Deductions ?

The rules of home office expenses and reimbursements

Pension Plan: Should I Stay or Should I Go?

Reviewing your pension options upon a change in employment

Bond Market: Too Big to Ignore