Are the Big 6 Banks at risk of cutting their dividends?

Canadian bank stocks are one of many casualties from the latest bear market that has been induced by both the Coronavirus pandemic and an oil price collapse. The drop from the most recent highs in bank stocks range from 30-40%, and it has caused their dividend yields to skyrocket. As a result, the common questions we have received are whether the banks will be able to maintain these dividend payouts and what would be the risk of a dividend cut.

To gain any insight into a possible change to a bank’s dividend policy requires a look at their payout ratios. This is defined as the proportion of the bank’s earnings that are paid out to shareholders. Traditionally, the Big Six Canadian Banks have targeted a payout ratio of around 40-50%. Given the sudden change in the economic outlook, the amount of earnings that the banks will generate are less certain. Below is a simplistic analysis of what the payout ratios for the Big Six banks would look like if the industry’s consensus earnings estimates for the next twelve months (NTM) were lowered by 10%, 20%, 30% and 50%.

Our firm’s Portfolio Advisory Group has noted that if a recession arose that caused provisions for credit losses (PCLs) to increase by 1%, this would be greater than what was witnessed during the financial crisis of 2008-09 and could cause a ~30% impact on earnings. As seen in the above table, a 30% decline in earnings per share (EPS) from current levels pushes the Canadian banks to a 60-70% payout ratio. As history has shown (see graph below), this is not unchartered territory. The banks have operated at payout ratios above 65% in the past including the mid-60’s, late 80’s, early 90’s and throughout the financial crisis of 2008-09. It would take a more extreme 50% decline in EPS estimates to get the Canadian Banks in the 90-100% range. At this point, understanding that the shocks from Coronavirus should be a transitory event, the earnings of the banks should not experience such a fate. 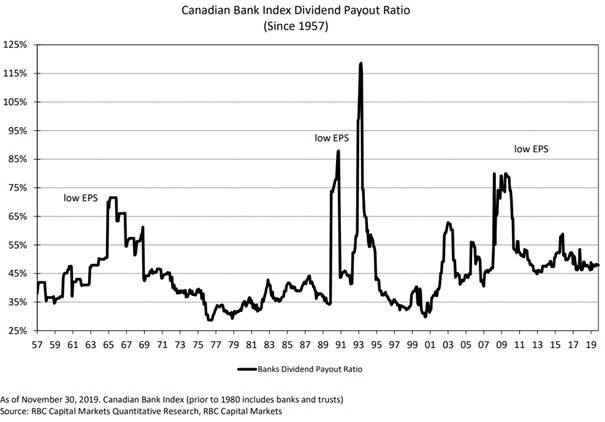 Monitoring Capital Levels of the Banks

In the post-financial crisis age, banks were required to operate with higher levels of capital to absorb unexpected losses. The chart below from RBC Capital Markets shows the Common Equity Tier 1 (CET1) ratio. The CET1 ratio compares a bank’s capital against its assets to determine its ability to withstand financial distress. Investors can notice that the CET1 ratio of the banks had increased from sub-8% during the financial crisis of 2008-09 to nearly 12% at the end of 2019. This means the banks are significantly better positioned to absorb economic shocks and could imply that the banks should not have to resort to cutting their dividend in times of stress. 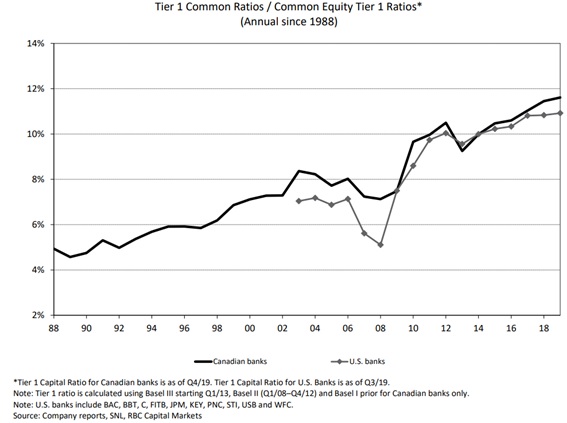 Although a pause or cut in dividends seems unlikely, it is not impossible. The Bank of Canada published a report last year titled “Assessing the Resilience of the Canadian Banking System”, where they stress tested the banks under very dire assumptions (-8% decline in real GDP, 7 consecutive quarters of negative growth, 12.6% peak unemployment rate and a 41% decline in housing prices). The result was that the banks would breach the necessary capital requirements and the banks would face an automatic restriction on dividend payouts. With that said, this extreme scenario seems beyond what most analysts are contemplating.

Signaling – Cutting the dividend is the option of last resort

Given that a large portion of the shareholder base are retail investors who rely on the dividend yield for income, the banks are not eager to cut their dividends as it would signal a very dire outlook for the industry. Cutting a dividend is typically seen as an option of last resort, and typically occurs in such dire environments where banks executives do not believe that even their medium-term earnings could support its dividend. It is also important to note that none of the Big Six Banks cut their dividend during the financial crisis of 2008-09. With all this said, although we do not expect the banks to cut their dividends due to an environment held hostage by Covid-19 and an oil price decline, investors should also tame their expectations for any dividend increases for the remainder of the year.

An update on the state of Canadian banks.

What does their recent under-performance mean for investors?

Coronavirus - A Dose of Realism