Coronavirus: Some Context for Investors

Coronavirus: Some Context for Investors

Should we be worried?

A newly identified pathogen, Wuhan Coronavirus (2019-nCoV), is spreading throughout Asia, Europe, and North America. Thus far, it appears that the Coronavirus is less contagious and less potentially fatal than SARS (Severe Acute Respiratory Syndrome), which caused a global outbreak in 2003. China’s government has worked transparently and diligently to sequence 2019-nCov within days of the outbreak, yielding a better understanding of its transmission and prevention. This response is in stark contrast to the SARS outbreak, when China concealed information about the virus for three to four months.

This is not the first time that investors have had to factor epidemics into their investment decisions. Since SARS (2003), the world has also faced H1N1/swine flu (2009), Ebola (2014) and MERS (2015). Although each epidemic had regrettably led to a tragic loss of life, these situations have proven to be transitory events for the markets. In other words, GDP, industrial production, and global consumption are expected to slow, and negatively impact markets, but the eventual containment of an epidemic has always led to a recovery and resumption of the overall trend line. 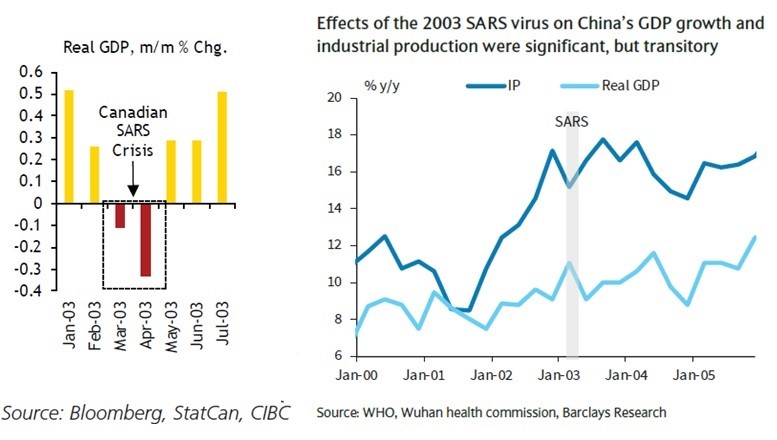 JP Morgan Research supports this thesis in a recent piece, opining that, “although these recurring outbreaks are alarming, there appears to be no ominous message about public health issues as black swans for markets. As shown in the chart below, which traces the number of deaths globally from epidemics over the past century, such episodes flare every few years but are fleeting. Mortality from epidemics has been declining for two decades.” 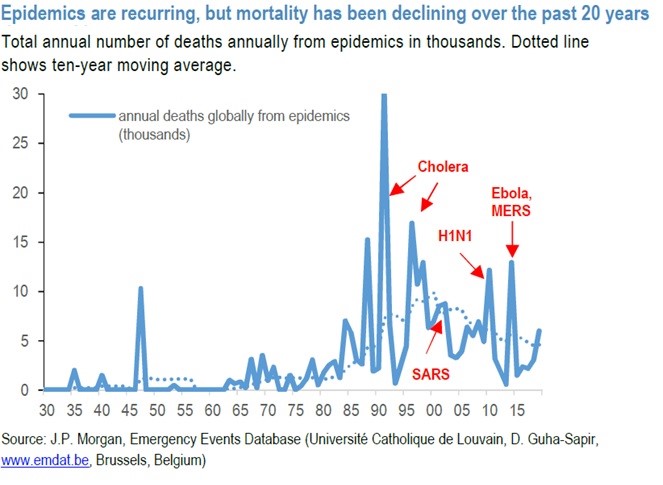 The measure of fatalities is important, as crowd psychology remains the dominant driver of market reactions. The greater the impact that an epidemic has on the physical world, the greater the impact we expect to see in the financial world. The report thus concludes that, since governing bodies have improved their protocols and responses to epidemics, we can feel optimistic that market impact will also hopefully be contained.

How did the stock market perform during past viral outbreaks?

The following charts from MarketWatch help to provide context around the equity market’s performance during past outbreaks. 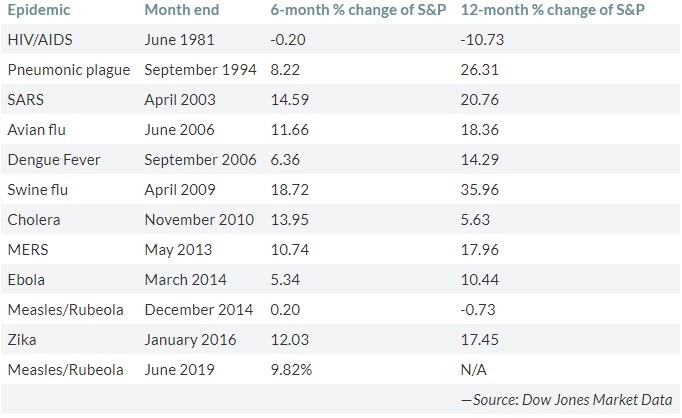 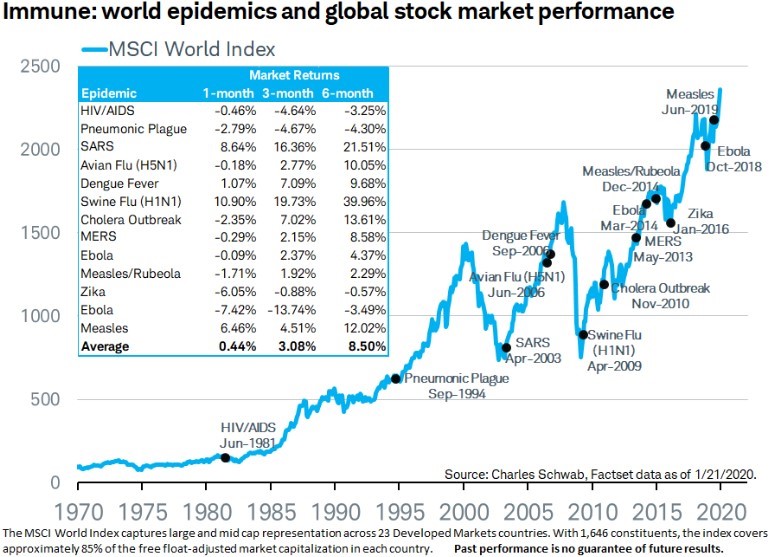 By using these past situations as a guide, investors have good reason to expect that the Coronavirus outbreak will also be a transitory market event, especially as the Chinese authorities appear better prepared to deal with this crisis by swiftly implementing measures to restrict travel. Although the expectation is that the anxiety and fearful media coverage will gradually fade, investors should brace themselves for further volatility and downside in the near term. The number of new infections remains on an uptrend, and the inflection point for market sentiment has historically arrived when the number of new cases has peaked. Click here for the official real-time data tracker. Until then, we recommend investors that have liquidity needs and shorter-term investment time horizons to review their portfolios with their advisor.

What do the latest headlines mean for investors?

Understanding where we are within the long-term market cycle

China’s Emergence – Too Big to Ignore

Why investors should pay attention to China.