What does their recent under-performance mean for investors?

The Canadian bank stocks are known to be widely held amongst retail and institutional investors. Hence, it is not surprising that the recent underperformance of Canadian Bank shares compared to the TSX index has left many investors grumbling with disappointment. While the TSX is back to over 16500, Canadian banks as a group is still approximately 5% below the September 2018 highs. 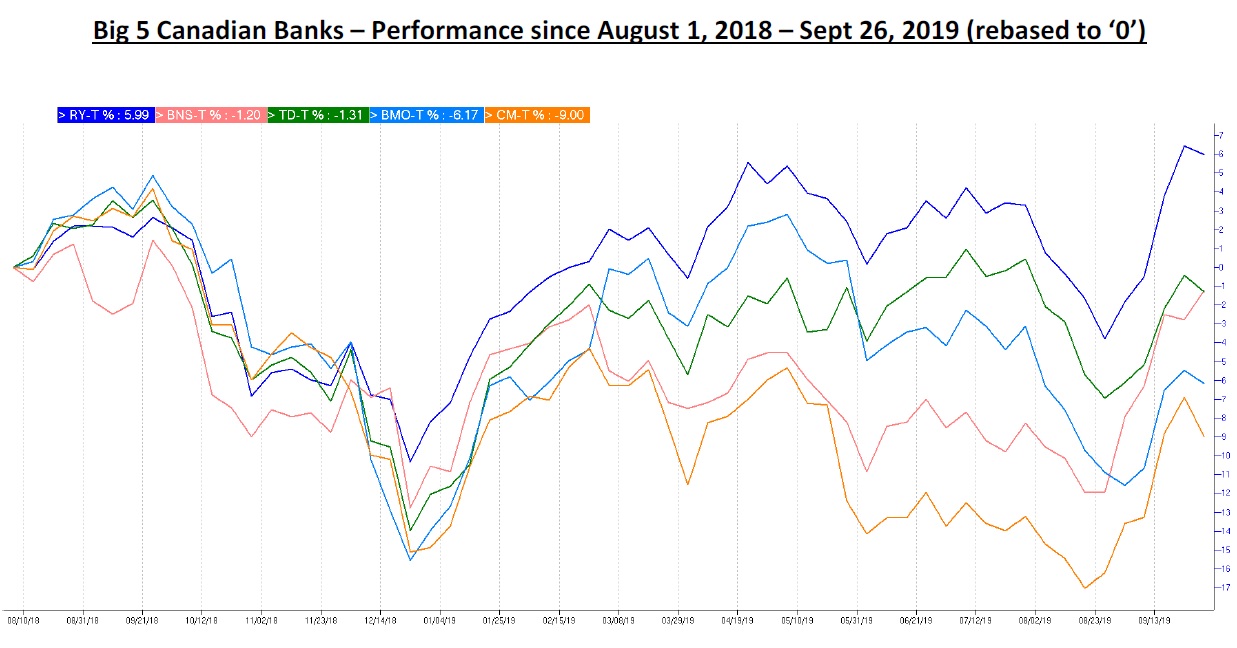 The Canadian banks released their 3rd quarter earnings in late August. Some made the consensus expectations, while others fell short. We have seen the majority of the bank share prices locked in at the middle of a 2-year consolidation phase. Bank shares like CIBC and BNS now have a dividend yield of close to 5% or higher, which was last seen during the 2008 financial crisis.

During the past 18 months, we have seen Canadian banks continue to increase earnings at a healthy rate (2018 EPS growth was 15% on average) and their dividends have grown more than 8% year-over-year, yet the share prices have continued to seesaw.

Why are the Banks in this state?

Bank shares tend to perform well when the economy is improving. Primary valuation metrics, including P/E, price-to-book and dividend yield, tend to rise during the economy’s growth phase. However, Canadian banks are currently trading below their historical averages on an absolute and relative basis against the TSX. The large Canadian banks are currently trading at 9.8x consensus forward P/E which is below a historical 10-year average of 11.2x.

What are the concerns?

The provision for credit losses (PCL) is treated as an expense on the company's financial statements. It refers to expected losses from delinquent and bad debt or other credit that is likely to default or become unrecoverable. In a year-to-year comparison, PCLs have increased by 27%, indicating that the banks are starting to predict a deterioration in loan quality, and are expecting to see a downturn in a number of sectors.

Due to the forecasted revenue growth of 5.7% for the upcoming 12 months, and the forecasted increase of 5.5% in expenses, these combinations have left the banks in a less favorable operating leverage position.

With the US economy growing at a healthy rate in 2017 to 2018, banks that had greater US exposure proceeded to do very well (e.g. TD, BMO, CIBC). However, more-muted growth expectations are starting to take a toll on banks with higher US exposures. In fact, the 2017-2018 tailwind has now shifted to a headwind. In general, we should not be overly concerned about the state of the US economy. However, with the recent inverted bond yield curve flashing a recessionary warning sign, it is difficult for investors to ignore the heightened possibility of a slowdown in the economy.

In the most recent earnings report, the US operations of Canadian banks have continued to experience a modest loan growth of over 10%. However, the decrease in revenue growth in 2019 is a sign for concern.

Another troublesome outlook for the banks would be the possibility of the entire U.S. Treasury curve turning negative. This is similar to what we are seeing today in certain countries around the world, such as Germany and Switzerland.  If investors believe that there is a higher probability that either scenario will occur within the next 12 to 18 months, they should sell their bank stocks today. We do not believe that either scenario is likely, thus we remain committed to bank stocks.

Our bank analysts from both sides of the border agree with the perspectives of the bank CEOs, that the reserves of loan loss are sufficient at this stage. Therefore, the single-digit growth in EPS in the upcoming year is quantifiable. The share prices or valuations are discounting a slow growth to a flat environment, with no immediate downside concern.  With shares below their historical prices and a 4%+ dividend yield for Canadian banks, we feel that they should continue to hold a core position in our portfolios.

We are staying vigilant regarding the continuance of the trade issues involving China, as well as the negative yield on some of the sovereign bonds in countries such as Germany and Switzerland. This is not an ideal environment for banks to operate in. If the US/China trade communications fall apart, global economies may fall into a recession, resulting in higher credit losses for banks. Due to these concerns, we must avoid positioning ourselves with an overweight recommendation on banks, despite the attractive valuation metrics.

An update on the state of Canadian banks.

Are the Big 6 Banks at risk of cutting their dividends?

Is Home Bias Affecting Your Portfolio?