Is It Time to be a Gold Bug Again?

Is It Time to be a Gold Bug Again?

Reviewing the rationale and outlook for adding gold to a portfolio

Many investors have been watching gold prices and gold equities lately, looking for a positive trend. Since May of 2019, the price of gold has rallied, from slightly below $1300 USD, to over $1500 USD per oz. The percentage return may not be classified as parabolic, but since gold prices have been underperforming most asset classes post the 2009 financial crisis, many gold pundits are eager to relive gold’s great bull run (from $700 USD to $1900 USD from October 2009 to 2011).

According to our Technical Strategist, Bob Dickey, the trend on gold has been sharply bullish over the past two months and will continue to be in a bullish technical condition, as long as it stays above $1360 which was a resistance level that Gold has since broken out from. Recently, gold has been consolidating in a tighter range of $1390–$1450 after the initial rally; this could indicate an ongoing uptrend. Gold stocks have been outperforming Gold Bullion during this recent consolidation period, and Mr. Dickey believes that this is a positive indication for the overall trend. While there may be some profit-taking after the rally of the past two months, the longer-term trend does not indicate any “toppy” signs that he can foresee at this time.

At this point, it is useful to remind ourselves of the traditional reasons for explaining increasing gold prices

All these factors show that Gold has a positive price elasticity; when more people and institutions buy gold, the price tends to go up. Fears of recession, the intensified US-China trade war, and general market concerns have increased demand. Moreover, in attempts to diversify their reserves, central banks have already added 375 tonnes of Gold in the first half of 2019, which represents a 57% increase compared to last year.

Although inflation appears to be subdued, interest rate cuts are back in style, and the easing of global monetary policy has become one of the main reasons why gold has gained momentum. Gold does not pay a dividend or any income, and therefore it tends to do poorly when we have healthy equity markets and high interest rates. It remains to be seen if the recent Fed rate cut of 0.25% is merely a “mid-cycle adjustment,” or the beginning of a long series of rate cuts. The latter will be positive for gold prices to continue to rise. However, decreasing interest rates may be enough stimulus for the economy to help push the next recession further out into the future. If the economic expansion lasts longer than current expectations, then the enthusiasm for gold demand may fade. In all, the multi-levers that affect gold prices can often contradict one another, which not surprisingly, makes the exercise of predicting gold prices a difficult task.

Currently, there is a general feeling that on top of the trade war, we may actually be seeing countries devaluing their currencies against those of other countries, in order to gain a competitive edge. The biggest winner will likely be gold. As quoted by Sprott’s CEO Whitney George, “Gold is a currency, but it’s nobody’s obligation, so it will stand tallest when everyone else is trying to debase their currency to be competitive globally.” With President Trump labeling China as a currency manipulator, hedge fund managers have been increasing a net long position on gold during the past several weeks. 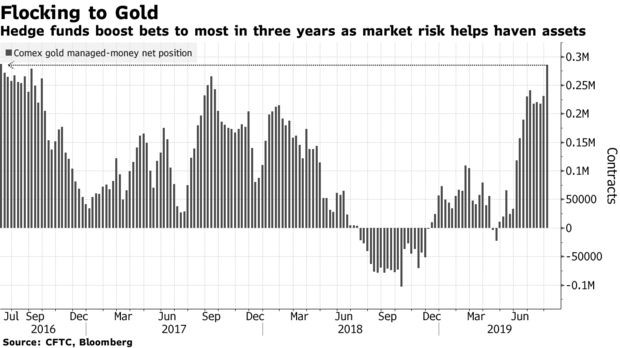 Despite the sudden jump in gold prices, we view most investment vehicles for gold as largely sentiment-driven and often attracts trading rather than long term investing. That being said, after 6 years of consolidation, it appears that a lot of new and growing allocations seem to come from those more willing to “buy and hold”. 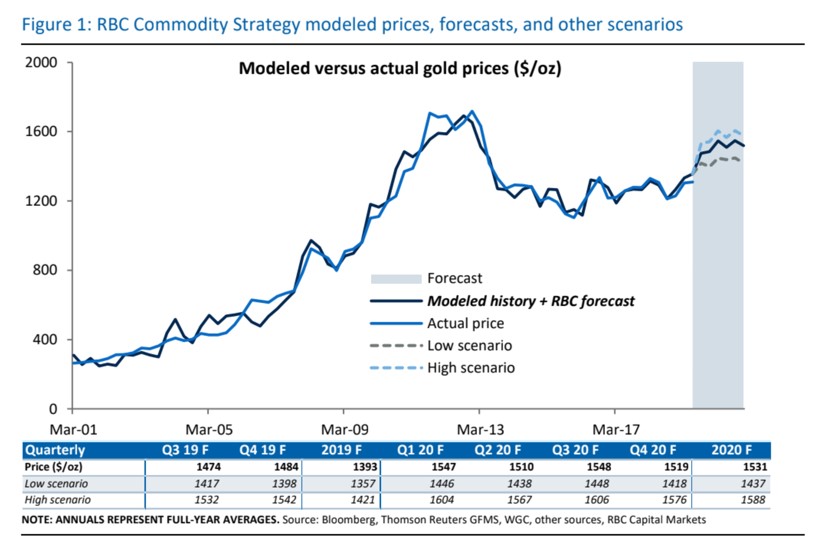 RBC Capital Markets currently has a base case of $1393 (2019) and $1531 (2020) forecast for gold, implying an assumption of ongoing risk, trade conflict, economic worries, and market tumbles. Gold prices could certainly spike higher, however, the current rally could abruptly end stemming from reduced recessionary risks, progress in the trade war, a dialing back in Fed and global monetary policy expectations, and a calming of economic and geopolitical fears. An allocation or trade in Gold for diversification purposes can be justified, however, we would need to see more evidence of deteriorating economic fundamentals and a potential systemic crisis before we look to Gold as a sizeable and longer-term holding.

Is it too late to buy gold?

When thinking about adding exposure to this asset class, Gold Bullion may provide the type of price action that one seeks.

Green shoots of a V-shape recovery in spending