Comparing the Tech Bubble of 2000 with Today's Tech Boom

The U.S. tech sector has been a significant influence behind the S&P 500’s advance and strong relative performance compared to other countries.  Accordingly, the impressive gains that the large-cap Tech names have delivered have prompted questions from investors about valuations and whether a “Tech Bubble” is starting to form.

However, a closer look at the fundamentals of the tech sector suggests that concerns over a bubble are exaggerated. RBC Global Asset Management has compared the tech bubble of the late 90’s and early 2000’s to the current period of technology strength. Using the chart below, investors can see that during the tech bubble, the tech sector made up almost a third (32.4%) of the S&P500’s market capitalization, but only represented 13% of the index’s earnings. 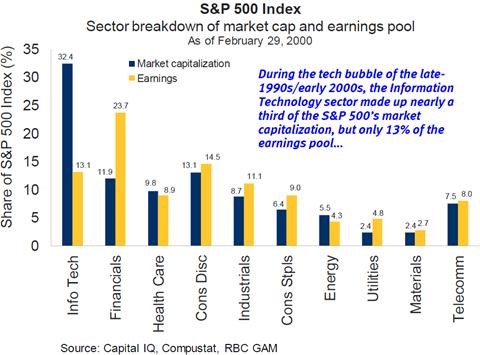 In contrast, the following chart shows that the tech sector today makes up a fifth (21.2%) of the S&P500’s market capitalization, while essentially delivering an equal share of the earnings (20.4%). This leads to less concern of the market valuations of technology stocks being over inflated as profitability is rising appropriately in tandem with market capitalization. 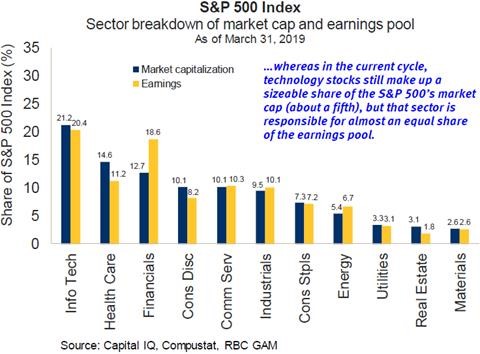 The tech sector does deserve its’ high profile and influence on the market as it has grown its earnings faster than any other sector in the S&P500 over the past 28 years. The chart below displays the meaningful and consistent earnings growth outperformance of the Technology sector. 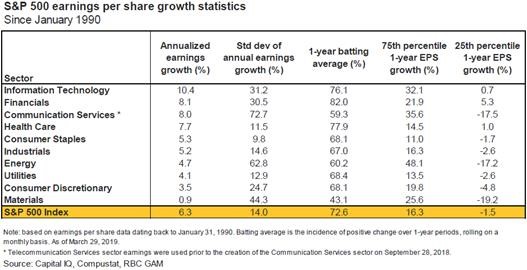 Finally, the perceived risk profile of the tech sector has changed. Previously, technology stocks were characterized as a “high flying” industry, not all able to reach profitability and facing a high cash burn. Currently, the tech sector is now comprised of more consistent dividend payers. As the chart below illustrates, nearly 70% of the tech sector within the S&P500 now pay a dividend, compared to 33% a decade ago and less than 30% during the early 2000s tech bubble. 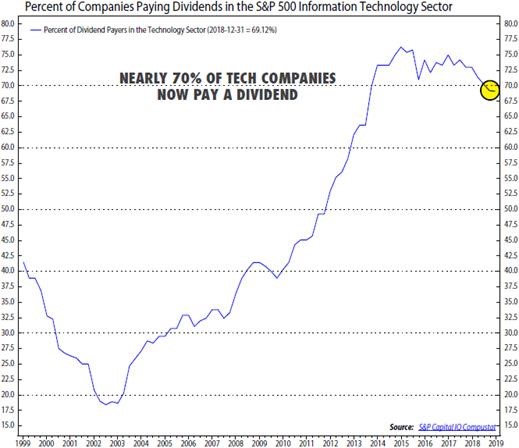 Combining all the points above, it appears that the tech boom of today is inherently different from the tech bubble of the 2000s. Currently, we see a technology sector whose valuations are growing in tandem with earnings and a better capitalized tech sector able to maintain a steady dividend to shareholders.

Which ETF is Right for Me?

What could negative interest rates mean for investors?