Make Hay While the Sun Shines

It is a bit peculiar that, in retrospect, 2020 has left those of us not directly affected by COVID with a lot to be thankful for. There seem to have...

...been countless “COVID silver linings”, from more time with loved ones to providing a hard reboot on personal priorities to pulling the technological future forward. Of course, for investors there has been even more to be thankful about given the remarkable resilience of financial markets. In most global markets that meant eeking out a better-than-feared, slightly positive return for the year; and as everyone knows, for US growth equities specifically it has meant returns that are well into double-digit territory.

Looking forward, we now appear to have a clear financial bridge to this summer in place, suggesting that the outlook for investors remains bright. In Canada, government benefits were extended in late November, while more importantly in America, a $1 trillion-ish stimulus bill was finally passed last week. The first round of US stimulus from March provides context for the impact we can expect to see shortly: cheques were distributed to families rapidly, arriving in bank accounts within a few weeks and leading to an immediate and strongly positive increase in consumer spending, particularly online: 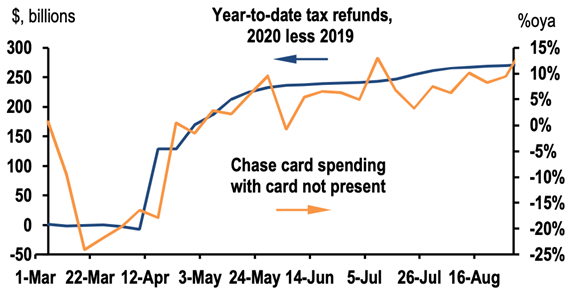 We have seen the cascading effects of stimulus in traditional economic indicators ever since. For consumers specifically, a significant amount of government benefits were saved in addition to the positive spending impulse, leading to a record-high savings rate that has bolstered the balance sheet of an already healthy US consumer. Interestingly, with the ink barely dry on last week’s $1 trillion top-up, the incoming US administration has signaled that they are likely to pursue yet another round of spending. They might even be able to do so quite aggressively if both of this week’s toss-up Senate elections in Georgia are won by Democrats. Despite a stubbornly high virus case-count, this flood of on-going and immediate support is more than enough to keep investors “working through the pain” of this COVID winter, focusing instead on the presumably more tranquil pastures of summer and beyond.

Granted, that leaves the question of whether markets are correct in focusing on the bridge to summer rather than on a more permanent, but more distant, line of sight to herd immunity. With the usual caveat of not being an epidemiologist, I’d argue the near-term focus is appropriate: if the crisis issue is hospital capacity, then the prioritization of inoculating seniors should lead to rapid relief. As a starting point, note the percentage of COVID-related hospital beds occupied by seniors:

COVID-19: US Hospitalizations by Age 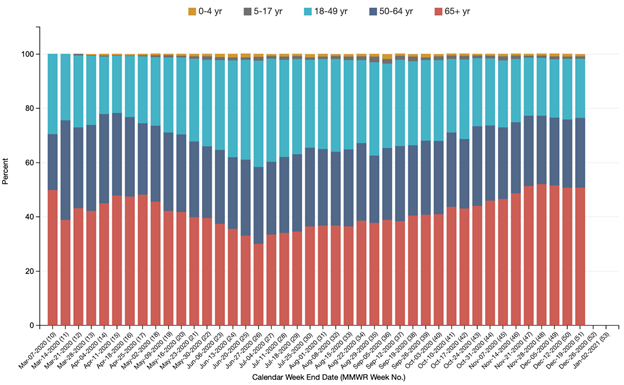 The percentage is almost 50%, while citizens aged 65+ represent only around 15% of the population in both the US & Canada. In the US, that equates to about 50 million people, and even despite a disturbingly slow start, approximately 1.3% or 4.25 million Americans have now received their first vaccination shot (the stats are disappointingly only 0.3% to-date in Canada). Biden’s promise to administer “at least 100 million vaccine shots” in his first 100 days in office could fall short and the math would still imply that peak hospital capacity risk from COVID will have come and gone by this April. Lump on top of that the fact that Q1 earnings this April and May will show huge year-over-year growth as 2020’s terrible earnings numbers are lapped, and you can see why a bridge to summer may well be all that is needed for investors.

What that does leave us wondering, however, is whether there isn’t some sort of post-traumatic let down in store for markets by the latter half of 2021. With reduced lockdowns and a light at the end of the tunnel, a flood of consumer savings is likely to be in the midst of getting unleashed at that point on future travel bookings, elective medical procedures, etc. But at the same time, it will become increasingly obvious that an end to government stimulus will necessarily result in a very significant, mid-single digit drag on GDP growth in 2022. Central banks have committed to keep rates low well into the expansion, but the question on investors’ minds could reasonably shift to whether there is enough economic momentum elsewhere to barrel on through the fiscal drag. That will be difficult to predict with any accuracy, and the standard financial market response to uncertainty is for valuations to contract – a “market correction” environment. Markets like that also tend to pierce bubbles, some of which now clearly exist (one random example: QuantumScape, an EV battery start-up with zero revenue that IPO’d in November, now sporting an equity value of $44 billion).

In such an environment, the binary nature of market narratives that have characterized price action since March should start to change. Risk-on vs. risk-off, COVID winners vs. COVID losers, Growth vs. Value, US vs. non-US – all of these overly simple themes seem poised to begin fading in favour of specific investment selection and perhaps also nimble transitions between asset classes.

But again, if that evolution occurs it perhaps begins in the second-half of 2021. For now, the sun is shining on equity markets and so long as that’s the backdrop, best to simply stay invested and keep making hay.