...financial markets don’t reflect whether the business environment is good or bad but instead reflect whether it is improving or deteriorating, the continued optimism is understandable.

For example, below is a heat-map of high frequency US job metrics, using both conventional and unconventional economic data sources. The evolution of the data week-over-week is quite clear: mid-April was the peak for loss of employment, and all metrics have been steadily improving ever since (except for the value of unemployment cheques…although a rising number for that metric is arguably helpful in the near-term).

In addition, the infection data itself has meaningfully improved leading the vast majority of states to now reopen. Even in the economic heavyweight state of California where a slower, regional approach is being used, the government now estimates that 70% of the economy has reopened. Canadian provinces have also substantially resumed business from an economic perspective (ex. Alberta stores open since last week, majority of Ontario stores opening today, Montreal region set to open next week)

Economic opening status of States (May 18) 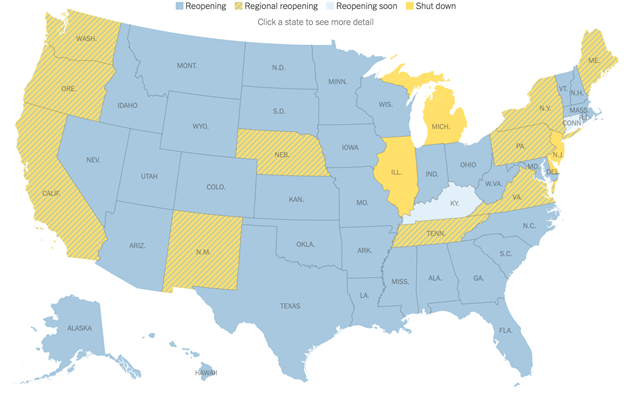 Of course, the flip side of this progress is that by definition the bar for further improvement has now moved higher. Interestingly, it has done so immediately ahead of a period that will have a dearth of data; for example, Q2 earnings reports won’t begin until late-July and conventional economic data for the next month or two will be too backward-looking to be of much use. In fact, the only obvious new data points in the near-term appear to be regional infection rates. For those, it doesn’t really take an epidemiologist to see that probability favours rates ticking upward since personal mobility is now increasing. While a controlled rise could be fuel for further equity market gains, evaluating whether or not that is actually occurring is a process that: A) is likely to be bumpy; and, B) will take multiple weeks, at a bare minimum. Absent other data, that time horizon is long enough for investors to feel at least some temporary indigestion with the 8-week stock market rally that has taken the forward P/E multiple for the S&P 500 back to almost 21x.

Perhaps more important, though, will be the general public’s perception of that same data. After all, if consumers feel unsafe then reopening doesn’t matter. In one of last month’s updates, we included an image of The Harris Poll showing how long consumers indicated that it will take them to resume certain activities after reopening. The category with the fastest return to normal was “Going out to Dinner”. While anecdotal, the change of intention around that activity (chart below showing percentage of respondents’ answers) sends an uncomfortable message about how consumer spending is decaying while awaiting the return of a general sense of safety. 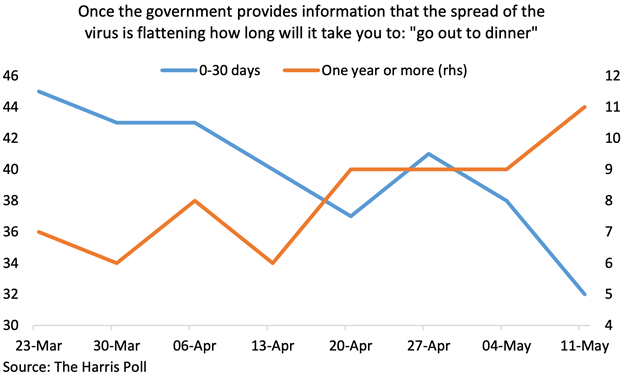 This consumer perception of safety is part of the reason Fed Chair Powell emphasized last week that “the path ahead is both highly uncertain and subject to significant downside risks.” If nothing else, it highlights the risk that while an economic recovery could begin much more rapidly than in a typical recession, that recovery may exhibit relatively slow GDP growth over the medium-term, along with low interest rates and low inflation. Sound familiar?

As we await the general public’s perspective on safety and a resumption – or not – of normal activity through May and June, equity performance should start to rotate away from companies torqued to a recovery and move back toward “safer” companies that have either structural growth tailwinds or a reliable dividend yield. For the former, a company that can remain cash flow positive through the recession as a result of high and/or flexible operating margins and that can resume reasonable growth afterward mathematically shouldn’t have its valuation affected substantially. For the latter, last decade provided evidence that investments with a relatively reliable yield attract a premium valuation when interest rates are near zero. For the rest of equities without either of those characteristics though, the bar for further positive performance has been increased.