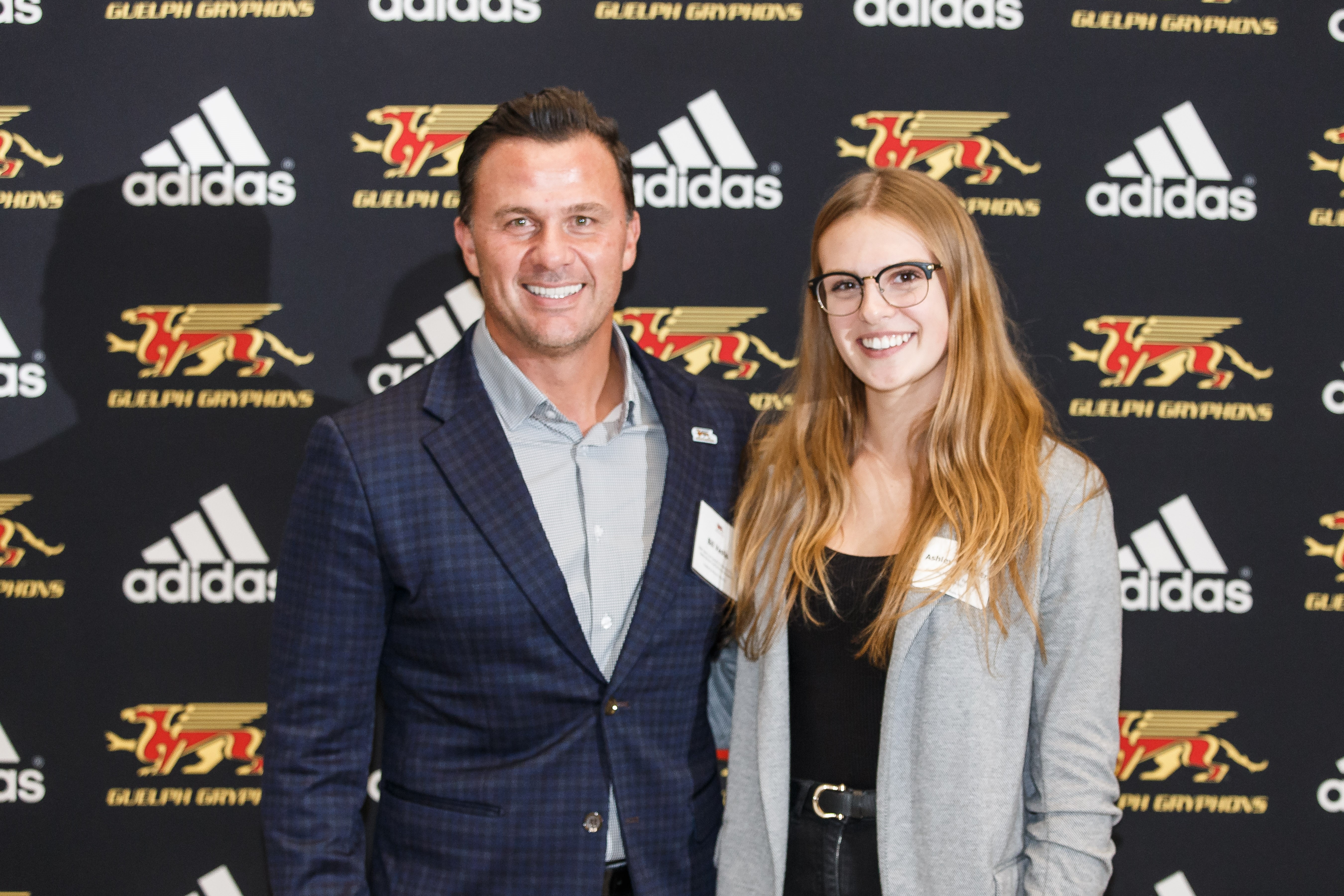 When my 3 daughters and I came up with a scholarship idea in their grandmother's honour, they wanted giving back to a specific group of early leader that have a few merits.

When I met Ashley I asked a bit about her and her story in university and basketball!

"I am currently in my fifth year of university as a Child, Youth, and Family student here at Guelph! Last year, in my fourth season, in our season opener I tore my ACL. This was very devastating to me as a player, as I would be out for the entire season and potentially part of the season going into my fifth year. Luckily I was able to get in for surgery at the end of November and was able to start rehab. The past year was the one of the hardest I’ve had, but being forced to sit on the sideline for a season taught me a lot about myself and challenged me physically and mentally. I truly learned what it means to be resilient and did everything I could to be prepared for the start of this season. There were days that were very challenging and it really took a toll on me, but with the support of my teammates and coaches I was able to push through. It was extremely frustrating being forced to watch my team through the wins and losses and being unable to contribute, but it also made me super grateful for the opportunity I’ve had to play basketball at this level. I ended up being cleared in August to play, which made me extremely excited. I am still currently playing limited minutes but it feels SO amazing to play again. I am super excited for my last season as a Gryphon and super appreciative of the opportunities I’ve had and the journey I’ve been on.

I just wanted to thank you again so much and I am truly honoured to be the first recipient! If there is anything else you want from me, let me know!

Growing up I played sports my entire life. Sports became my whole life at a young age and that’s all that I knew life to be. I’m sure some of you can relate. For me, I started playing club soccer and hockey at age 8 while also playing other sports for fun on the side. When I was older, I found myself playing football for Guelph and thought that this would be a potential career for me. This meant I spent my day at school, then would run home to eat and change for practice, went to practice, came home and did homework, and then put that on repeat for every day of the week. I didn’t know of anything other than having practice daily and committing my entire weekends to being on the field. This was normal to me, it was my life, and I absolutely loved it. It never crossed my mind that this was going to come to an end one day. But then that day came sooner than I could have prepared for, and as my career ended, I had no idea the road that was ahead of me.

Football was my everything; my identity. Being an athlete was the only thing I’d known, so when it abruptly came to an end, I quickly became lost in who I was. Football had given me purpose, given me a reason to work out, given me a community, and these were all things I longed for and looked for when it ended. I needed something to give my life to, something to fill me up.

When meeting new people while growing up, I typically introduced myself with my name, where I was from, what school I was going to and that I was a football player. I believed that was my identity and it was how everyone knew me. Although that was part of who I was, it was not my only identity.

Looking back at what my mother and what she taught me in her short 47 year life; and immigrant at 18 coming from Greece to find any type of work and identity for herself.  She proved that her GRIT was for major purpose.  Although she never had time to play a sport in Canada, in her young life she was very into track and field.  Her identity in Canada was growing a family from the age of 20 and holding two full-time jobs.  One at work and one at home.  Her story grew quite successfully for a young women who did not have an education or any level of mentorship.  Her GRIT was all she had.

Unfortunately, in the prime of her life, the disease called Cancer, had given a 6 year battle. Ironically, I was 18 when I lost the most important woman in my life and had very little vision as to what my purpose might be moving foward.  After going through my mother's belonging, I came across a letter she wrote to me, knowing that I would find it one day.  Translating from her Greek dialect, it summarized her love and passion for her family and that she had served her purpose in life.  It was now my turn to to do the same as she taught me.  Her main request? Was to gain the education she never had.  I found my opportunity of education and sport at The University of Guelph.  Although, it may seem like she lost that battle 30 years ago,  the very few people she nurtured are expanding on the foundation of GRIT she left behind.

Grit is passion and perseverance for long-term and meaningful goals.

It is the ability to persist in something you feel passionate about and persevere when you face obstacles. This kind of passion is not about intense emotions or infatuation. It’s about having direction and commitment. When you have this kind of passion, you can stay committed to a task that may be difficult or boring.

Grit is also about perseverance.

To persevere means to stick with it; to continue working hard even after experiencing difficulty or failure.

Research indicates that the ability to be gritty—to stick with things that are important to you and bounce back from failure—is an essential component of success independent of and beyond what talent and intelligence contribute (Duckworth 2016).

Why is grit important?

Grit is important because it is a driver of achievement and success, independent of and beyond what talent and intelligence contribute. Being naturally smart and talented are great, but to truly do well and thrive, we need the ability to persevere. Without grit, talent may be nothing more than unmet potential. It is only with effort that talent becomes a skill that leads to success (Duckworth 2016).

Without grit, talent may be nothing more than unmet potential.

I believe that an individual like Ashley will set great examples and that the soft skills she has created for herself from the Guelph Gryphon culture/sport will demonstrate that her identity has only just begun.  It is why the young lady represents the definition of this scholarship: The Sotirea Vastis Woman's GRIT Scholarship

Vacation properties go by many names: cottage, chalet, camp, cabin or secondary home. Regardless of what they call it, many Canadians receive great personal enjoyment from their vacation property. Some owners feel it is important to keep the vacation...

Filing a tax return for your child that has earned income will allow them to generate RRSP contribution room and open an RRSP. By being able to open and contribute to an RRSP, your child may learn the benefits of saving and tax efficiency strategies in...