I have a confession and it’s painful to admit. For over a year I have been telling clients that Shopify was too expensive and that they shouldn’t buy any shares at “this price”. I said it at $200. I said it again at $300 and $400. I definitely said it when the stock price hit $500, although boy did I question my thinking by then. It’s tough to see your advice to NOT do something cause someone to miss out on a huge gain. Just look at this chart since their IPO. 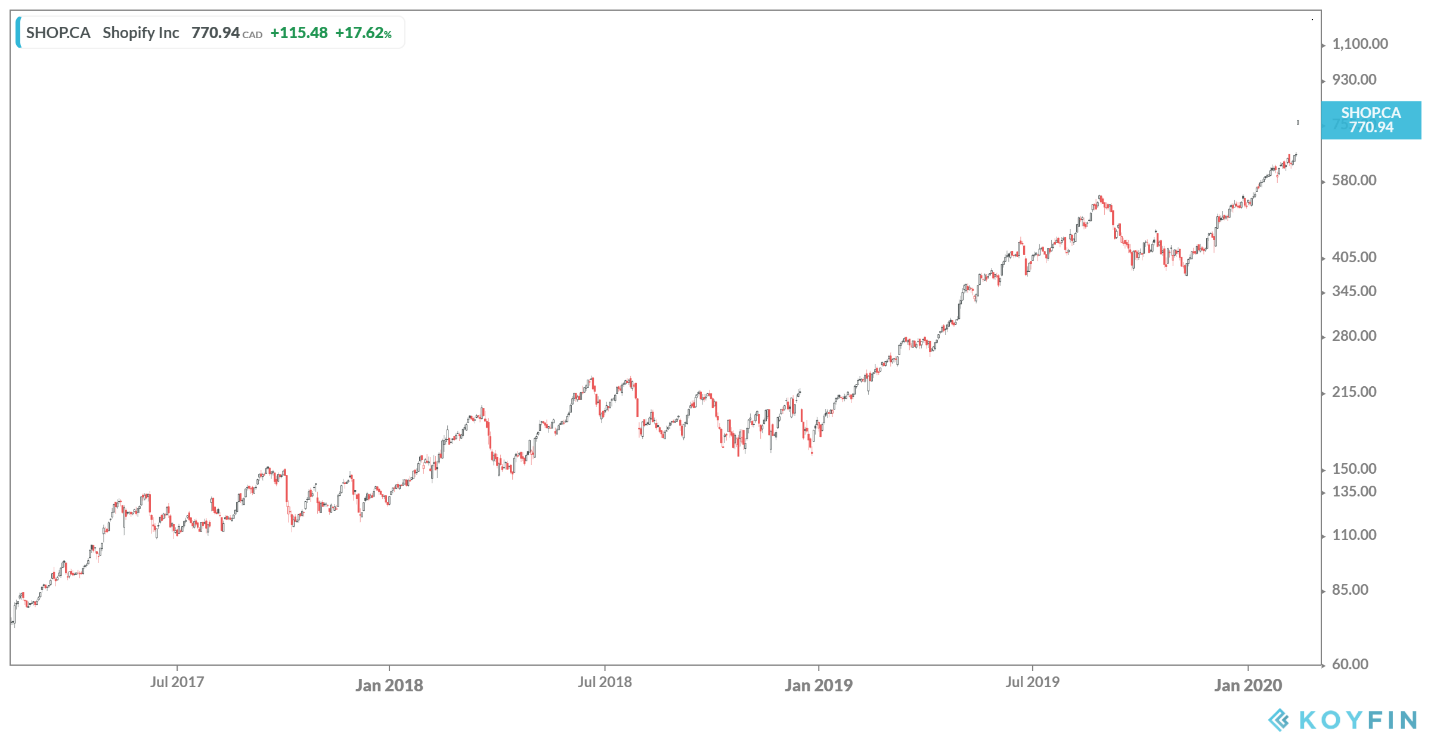 That’s what we call a ten-bagger (a stock that is ten times its past value) in our industry, and you don’t see those too often in Canadian technology.

But this isn’t a post about missing out, it’s a post for those people who did buy in and are up 10x their initial investment. It’s especially a post for the people working at Shopify who have options, restricted share units or just own shares outright. A rise like this has turned a huge number of early employees into millionaires.

If you are sitting at your desk in a Shopify office in Ottawa, Toronto, or elsewhere, you absolutely are now a full believer. You have seen your wealth skyrocket, and because your own efforts went into helping make this happen, you have an extra emotional attachment to this outcome. After a year of watching your small stake in the company go almost straight up, it’s normal for you to feel that extra attachment. You love Shopify and Shopify has loved you back.

Let me offer a bit of reason in these heady times. Shopify is a great company, and I am not an investor but I hope they keep proving me wrong. Canadian technology companies have long been in the shadows of our banks and oil and gas companies, but there is a real growth story happening right under our noses and Shopify is just the first to come. However, good times don’t always stay good. Good companies can often miss out on the next big opportunity. Good investments can turn sour quicker than you think. Because you have been part of the rocketship it will become increasingly difficult for you to see when things change. You are not only financially invested, you are emotionally invested in Shopify. It’s the emotional ties that always get us when things go bad.

What does that mean? Well first I think it’s important to understand your emotional connection to this sudden wealth. When you first got options or shares, it was a small amount of your money and you had hoped it would do this, but you weren't counting on it. Now that it has grown so much, you are likely thinking, “I knew this would happen.” You are suffering from a bit of survivorship bias mixed with a little hindsight bias.

Because Shopify survived where a bunch of other companies failed, you are now feeling that you KNEW it would survive and thrive. This isn’t a phenomenon restricted to investing and technology, the same can be said for anything. For example, if you picked the Raptors to win the NBA Championship at the start of last season, you probably felt pretty awesome when they did win. But the fact that they accomplished an incredibly difficult thing doesn’t mean that it was ordained to happen back from the beginning. It especially doesn’t mean that they will win it again this year (a guy can hope though).

So what should you do? Well first, be happy. It’s wonderful to see the success from your hard work. Next you should review what this means for your overall financial picture. Could you potentially have tax issues because of a capital gain? Do you have a proper will or estate plan in place? Is the sharp rise in your Shopify holdings now dwarfing anything else you own? Do you want to buy a home or renovate? Those are all important questions and lead to discussions around planning your finances.

The biggest risk to you now is what happens if Shopify goes down from here. What if they miss a market change or a competitor starts to seriously take market share and their business suffers? The easy answer is the share price drops. The harder thing is to handle the emotional impact of seeing sudden wealth disappear. It’s a double-punch to your stomach because you have built up the emotional attachment to the initial success. Hindsight and survivorship bias won’t allow you to adjust your thoughts. You were right already so how can you now be wrong? Once you have believed in your power of being right, it’s almost impossible for you to change your mind.

If I just described you, my best advice is this - sell some of your Shopify investments. Not all of it. Sell an amount that will help you cross off another goal from your financial plans. Keep the rest invested. Then when Shopify makes another big jump, do the same thing. What you will find is that you are diversifying your financial risk away from Shopify but also spreading your emotional connection to different areas that you can enjoy. You will find you are less attached to your investment in your employer which can give you just enough distance to see negative events clearer and limit the power of emotions on your financial decision-making.

I am excited to announce I am appearing as a panelist at Wealth Professional Canada’s AdvisorConnect Technology- Redefining the Future of Advice Virtual Conference on July 28th. With a focus on how technology is changing the financial advice industry...

Byte Sized Videos Are Back!