A true capitalistic system has “circuit breakers” to re-balance this problem.

Last week, when the Tri-annual Review was posted to the blog, it was that kind of weird week, where it is September, but Labour Day is late, so people are still away.

If you missed it and want to know about the broad financial market themes that will be emphasized over the coming weeks, as well as my outlook for the rest of the year I wish to, please click here to give it a read.

This week, I want to share a little bit about “social distancing,” but not the kind of social distancing we have all become familiar with due to the COVID pandemic. The type of distancing I am talking about is wealth and wage gaps between rich and poor.

The long term impacts on all of lifestyles are becoming more apparent as years of inequality compound the gaps between the advantaged and the disadvantaged grow wider. 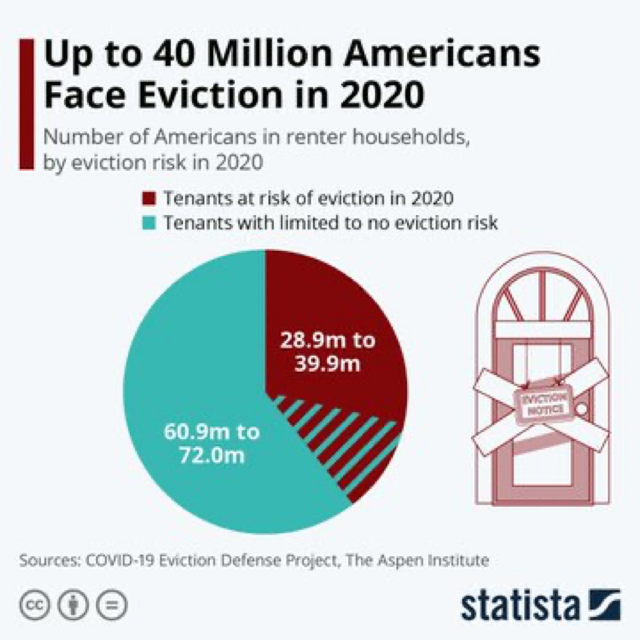 The chart above outlines a reality that was unfathomable in my youth.

Inequality has grown to such extremes that the governments are required to step in with income support (i.e. Universal Basic Income), or risk greater social unrest and public upheaval.

The next chart shows the percentage of 18 to 29-year-olds living with their parents. As of July 2020, that number is greater than it was in the Great Depression. 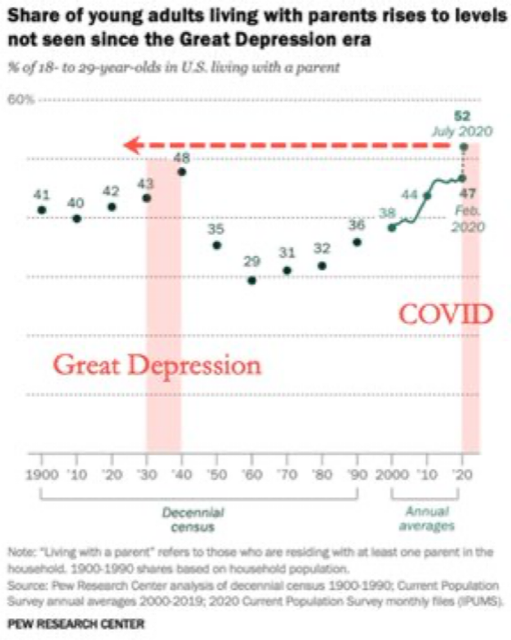 You see, social distancing when it comes to income and wealth inequality, has waxed ever greater over spans of decades.

As higher wealth socio-economic demographics see their situations improve, a great many others below them either tread water or get left completely behind.

A true capitalistic system has “circuit breakers” to re-balance this problem.

They are called recessions.

In a recession, those people and institutions who have caused the economic boom by taking on too much debt were traditionally liquidated during the economic downturn.

These liquidations created lower asset values in the short term, so new, less leveraged, investors could come in and buy at the lower prices starting the new economic cycle.

By allowing central banks to override the natural business cycle in the name of supporting asset prices for the past 30 years, this redistribution has been negated.

The byproduct of such a negation…social distancing in terms of wage and wealth inequality.

There are so many examples around me where I see young people struggling to afford their first homes, or delaying the starting of a family because they are “economically disadvantaged.”

These are not just high school grads who chose to go no further with their educations. Many have university degrees and formal job training.

Check out the next chart. It shows how up until 1980 hourly wages and productivity where closely knit together. 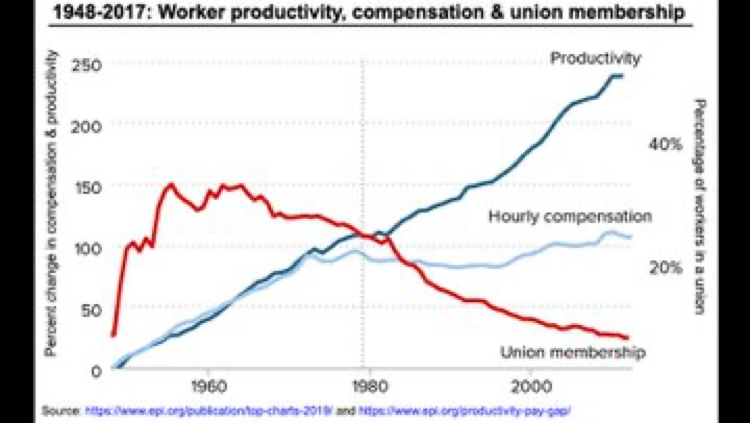 This made for terrific earnings for companies, but not so much benefit for families and working individuals.

But that being true, the capitalist system would have still rebalanced the “social distancing of wage and net worth,” with a less extreme gap, if the world had been allowed to experience natural recessions.

Zombie companies are now common throughout the world.

Large pools of capital are trapped in dead investments and fixed income products that pay nothing in return. Money velocity in the economy has crashed.

The debtor has been supported, the saver abandoned by our leaders: this all happened as a consequence of choosing to only support the indebted.

In summary, our financial future has been cast over the past 25 years. I see no pathway rebalancing the economy and the relationship between debtors and savers with higher interest rates.

The world will continue to be told that “debt doesn’t matter,” and “money can be printed to infinity.” It will go on until it can no longer, and not a moment less.

I can’t help wonder if the perpetrators of such policy really believe their own narrative. Honestly, thinking about it only makes you feel exasperated.

So we continue to watch the narrative play out.

I write this because I see the people on the streets of my town and remember the days when there were not so many of them.

I see our government trying to do something about the plight of our disadvantaged when they truly are “the arsonists telling the public they are the fireman” in this narrative.

I hear you and your words when I speak to you about rolling over a 2.5% GIC that is maturing and we can only offer you a yield of 1% or less for the safe portion of your portfolio. There is frustration in your words and voices.

There is nothing really new in the few pages I have written above. With Labour Day just come and gone, I felt to write a piece about how labour markets have shifted causing some incredible challenges for our middle classes and poor. Some issues would have happened due to technology anyway, much was exacerbated by “easy” monetary policy choices.

You and I get to try and sort through these issues and make sure your retirement stays on the right path. Your comments are encouraged.