Maybe if our leaders took the more direct path to speaking the facts, our youth would become more engaged.

How did you feel when you were listening to the Jody Wilson-Raybould testimony?

She was extremely direct.

Her words carried candor and poise; we’re not used to such commentary anymore.

Personally, my expectation was for something more “politically correct” and “watered down.”

At least Prime Minister Trudeau didn’t disappoint on the politically correct spectrum. He says “he’s not sure what JWR’s fate is in caucus”, but I’m pretty sure he knows exactly what is going to happen. (Smile)

Then there was the Michael Cohen senate testimony in the US.

A unique testimony in that Mr. Cohen already knows his sentence, instead of testimony offered as a plea bargain to soften a sentencing.

If you think about Mr. Cohen’s position…the only thing he could have done to make his situation worse was to perjure himself. That makes for a very interesting testimony, doesn’t it?

Strangely, it was not the majority of what came out of Mr. Cohen’s mouth that caught my attention. It was the political posturing of the Senators asking the questions that blew me away.

Few seemed to be trying to uncover real facts. Personal “grandstanding” and “political agendas” seemed more dominant. I must admit I only read the transcripts and watch the highlights of both hearings.

As I considered the content of these hearings, I could not help think about how our youth must view the self-serving motives and sheer amount of intentional deception our leaders’ model.

It all seems to add another brick to the wall being constructed between generations. I can hear them saying: “The system is broke…burn it down.”

Unfortunately, that attitude can have one throw the baby out with the bathwater.

Check out the chart below. It is one of the scariest charts that you will ever see in these weekly comments. 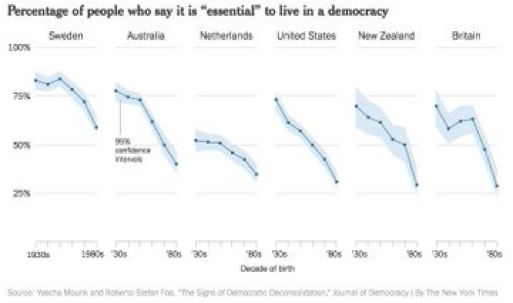 The chart is depicting the percentage of people in each demographic cohort who view democracy as essential in our lives.

Are you kidding me? Are the young people of the world so disgruntled that they want to get rid of the very process that validates the world’s most cherished political structure?

How can it be we have not passed on such a fundamental part of our societal DNA to the next generation?

If democracy has no value…what does?

“Political worldview vacuums” tend to get filled. What they are filled with has often not been pretty historically.

Maybe if our leaders took the more direct path to speaking the facts, our youth would become more engaged. No doubt the testimonials mentioned at the top of this letter garnered a lot of attention for their bluntness.

Maybe then we would decide to try and “build it up” rather than “burn it down.”

Would love to hear your comments as always.

Let’s take this discussion another direction.

My next submission takes a look at future growth rates for the first world countries.  (This portion of the comment is a small excerpt taken from demographer, Neil Howe’s paper “Will a Youth Boom Save the US Economy?”)

Here is the key, to keep things simple we assume “population growth” and “labour force participation” are easier to know and measure. Productivity is the most difficult to get a handle on.

The graphic below breaks US gross domestic product (GDP) growth into how much each of the three contributing components. 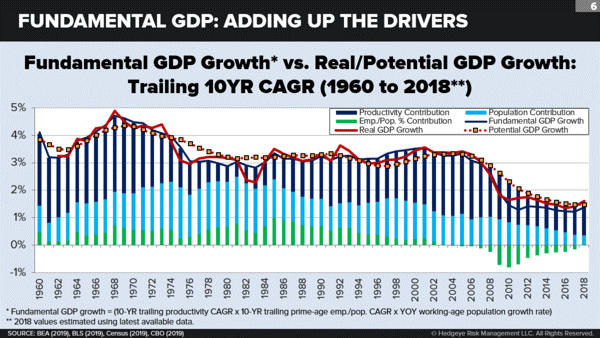 The main thing to gather from this graphic is the significance of the “productivity” component of GDP relative to demographics and working population percentage.

Next is the key chart.

When projecting our three contributing variables of GDP into the future we get an astonishing picture. 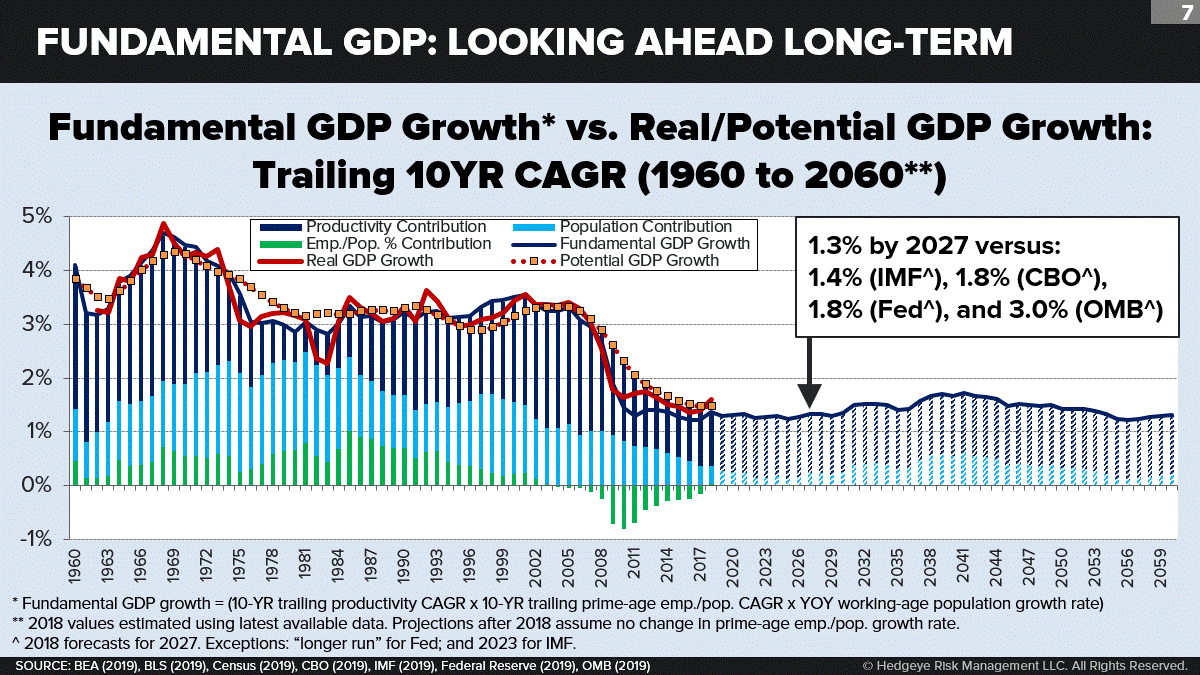 Wow, look how GDP goes flat for the next 40 years!

Why does this happen?

Please note this is not just one opinion. The caption box shows the International Monetary Fund (1.4%), the Wall Street Journal is at 1.8%, the Congressional Budget Office (CBO) who are notoriously too high are at 1.8%, the “serially too high” US Federal Reserve Bank is at 1.8%. Only the President’s own crew of economists (OMB) sit at the 3% number**.

Why are we spending time looking at this data?

Simply because the narrative must change to create the hope that, somehow given high debt levels, poor demographics, and already historically low unemployment, that growth a magically spring forth.

More debt needs to be created, lower interest rates are required to support that debt, and MORE PRODUCTIVITY must be generated.

Imagine how the next recession would play out if interest rates were at the present levels or lower when it started.

The usual interest rate decline in a recession has been on average 5.5% over the past decade. (Oddstats.com). If the economy starts at only 2.7% interest rates, the number would get to 0% long before the recession had ended. That would make it difficult to stimulate the economy further.

We know that the economy has slowed significantly. We also know it is not in recession yet. (See next chart. Advisor Perspectives…Doug Short) 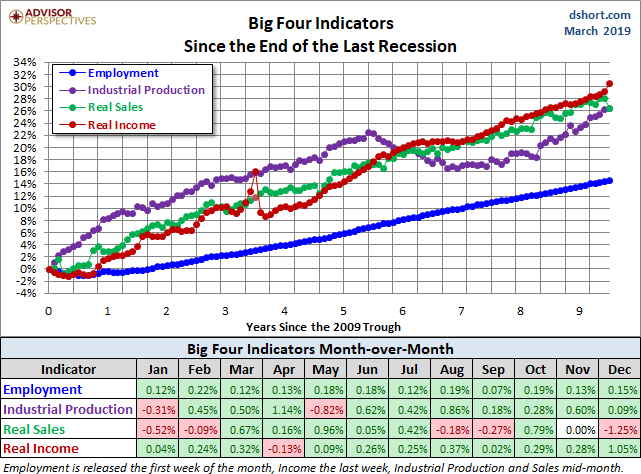 The next few months will be interesting to watch to see which way things go.

Summary: If growth is going to perpetually weak (GDP chart shown above) and debt is going to have to be ramped up to support the weak growth, then telling a story that makes the huge piles of debt to seem less than huge is important.

This is exactly what we are witnessing at this present time.

You and I are being “nudged” to believe that money can be printed out of thin air forever and paying it back is not required. Amazing times we live in.

**OMB tries to justify its very optimistic outlook, it typically points to the possibility of a dramatic productivity revival driven by President Trump’s economic policies. No one can definitively rule out that scenario. But it does seem unwarranted to bank on a large and long-term improvement totally outside the bounds of recent experience. Assuming some upward regression toward the mean is plausible. Assuming a miraculous turnaround is imprudent—if not irresponsible.

Last Week on the Markets

Stock markets were pretty flat on the week.

For the most part what was shaping up to be a down week was sharply reversed by a strong positive move on Friday. For the record, there has not been a down day on a Friday for the S&P500 yet in 2019.

Canadian markets were stronger than US markets. The main reason for the outperformance was the large decline in the Canadian dollar relative to the US dollar on Friday.

Canadian growth data was quite a bit weaker than expected and, in turn, the Canadian dollar sold off.

Gold and oil prices reversed to the downside during the past week.

If you want to look at something a bit outside the radar of most investors, take a look (again) at the Bitcoin and Blockchain investments.

These investments have totally made their way out of the news, but I am noticing some interesting price divergences. If you want to chat about any of these ideas or something else please touch base.