It’s often difficult to get a perspective on the relative importance of really big numbers. We can all understand for instance the link between our salary and the value of our home, and any mortgage we have on it. Of course, economies aren’t the same as households entirely, but I think that understanding relative figures helps at least but things into perspective. This stuff has always interested me, so humor me please!

This week, President Biden’s administration completed a massive $1.9 trillion coronavirus relief package. Without a doubt it’s the single largest one-time spending package for a country in the history of the world. I thought it might be interesting to first compare this spending with what other countries are spending, but also put it into context relative to the wealth of their nation.

I think this spending has significant implications for how we are all going to live our lives, and consequently, how we are going to invest and make investment choices.

1. US response vs Rest of World

To put it in context, Biden’s $1.9 trillion American Rescue Plan alone is larger than most countries’ annual economic output, running slightly behind Italy and more than Canada’s estimated $1.7 trillion annual economy. Keep in mind, this is only the latest U.S. measure. In December, Congress passed a $900 billion relief bill, on top of more than $2.5 trillion of aid authorized during President Donald Trump’s final full year in office.

The United States has spent more than anywhere else on coronavirus relief. Comparisons aren’t of course exact: In some countries, generous social safety nets that were already in place have kicked into gear during the pandemic, easing the need for massive spending pushes. In Canada for instance, our unemployment insurance is higher than in the U.S., and the amounts weren’t really raised, only expanded and provided to more people 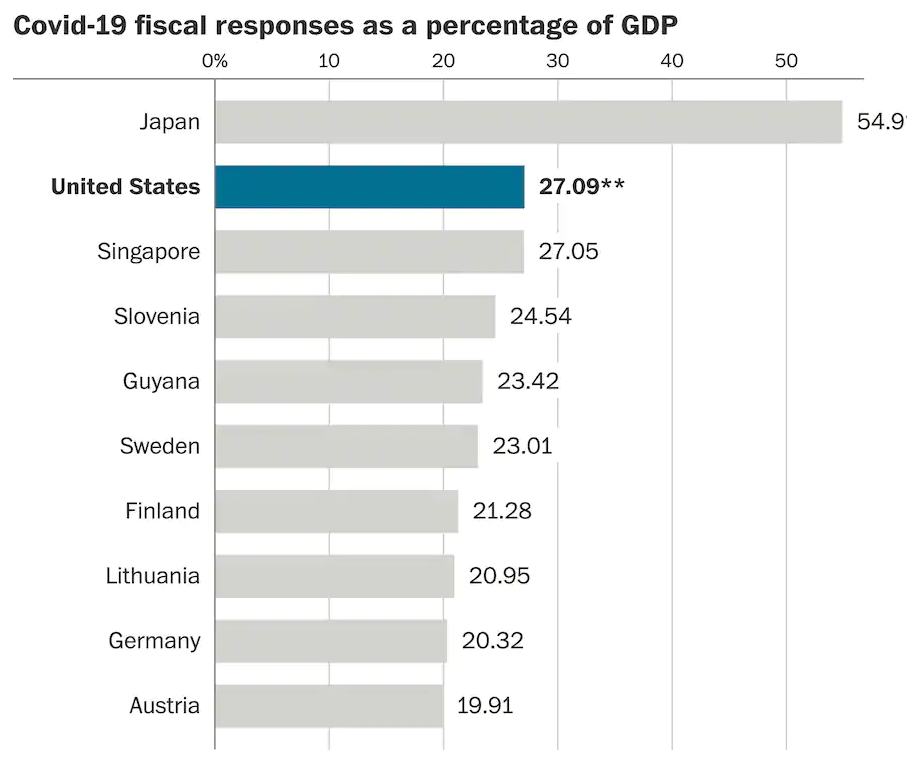 In 2020 the US response was among the largest in the world. It was comparable to, or slightly smaller than, the responses in a few other countries like Germany and Canada, but the fiscal response in 2021 so far in the United States is massively larger than what any other country has done to date or is currently discussing.

In a number of European countries, governments have resorted to extensive loan guarantees to help prop up businesses. The United States is one of the few major economic powers to offer new cash payments as a response to the pandemic. Japan gave out more than $900 to all citizens last year but has not yet committed to repeating that approach. Most other large economies have not relied on cash payments, instead falling back on preexisting social safety nets and/or social programs that Canadian’s are more familiar with. Another key difference is that many European countries paid companies to keep workers on, as opposed to the U.S. approach, under which the laid off could seek bolstered benefits.

This led to the United States taking one of the worst hits among major economies on labor force participation (but it has also rebounded massively, with unemployment now “only” 6).. Pre-pandemic, it was less than 4%, and went as high at 16%

Bottom line, the flexibility of the U.S. system enabled more money to be sent out, and so far hasn’t has a terrible effect on rehiring.

2. U.S. response vs their net worth

This is where it gets interesting. While the improvement in the economy hasn’t been distributed evenly or fairly, the amount of wealth accumulated, just by individuals in the U.S. in 2020 was staggering: a record $130.2 trillion in wealth. This household wealth rose $12 trillion from the year-earlier, pre-pandemic. Put into this context, the $1.9 Trillion package does not appear that significant. And this is just the wealth of individuals, and excludes companies.

While it doesn’t provide a breakdown of higher-income families versus poor ones, and masks the very different experiences of those with jobs and those without. But it does serve as a snapshot of the overall state of family finances as millions of out-of-work Americans exhausted their unemployment benefits, job growth slowed, and COVID-19 cases surged. And households stand to receive a new round of aid starting as early as next week, when most Americans will get an additional $1,400 check as part of this new $1.9 trillion program.

So what does this mean for us as investors? The full scale of relief spending, with various plans yet to be implemented around the world, remains unknown. But as a result of this approach, last year, the U.S. economy contracted significantly less than any of the other Group of 7 economy (with the exception of Japan).

It does beg the question: assuming that we do recover fully, and the pandemic does move into the past, what’s going to happen to all this money that was plowed into the system? Of course, no one has a crystal ball (who would have imagined that a year from the lock-down, and millions of deaths, that the Stock market would be at all-time highs, with housing prices growing so rapidly. I think as investors, we ought to be prepared to look at more “real assets”, and companies that are building businesses that will continue to grow as the world’s economies and our lives shift into this new reality. Anyway, that’s the challenge we are all facing as investors, and it’s what I spend most of my time trying to make prudent decisions for investors.

If anyone had all the answers, we should have bought this, which the proud owner doesn’t actually “own”, it exists on the internet, for a cool $69 million (LINK). Personally I’d rather own a Monet, and hang it in my home office, but sadly I was outbid on the auction for that, so I’m saving up for the next one… 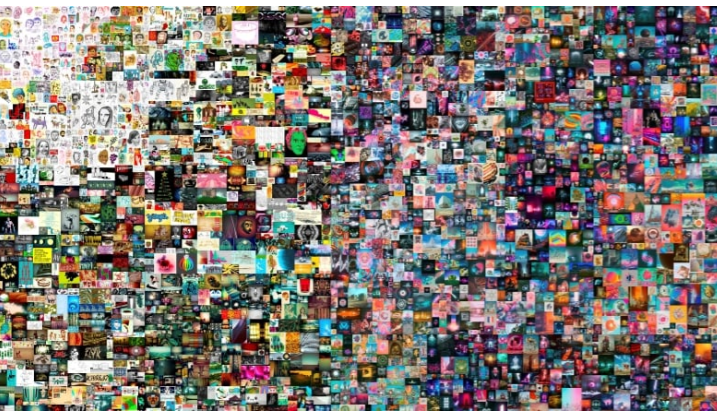 If I could do it all again, I’d for sure wish that I had a training in Computer Science/Engineering. Not sure if my son reads this, but I do spend time encouraging the so-called “STEM” to all children, thinking about the future. Think about all of the...