Let's say one year ago, I told you I had access to newspapers for the next twelve months, and I could share with you only the headlines: Here are the headlines I have selected for the last 12 months.

“A Virus with no cure is continuing its spread across the world, 6 million cases, more than 380,000 people have lost their lives”

“President Trump retreats to bunker under the White House as cities impose curfews, National Guard mobilizes as U.S. faces another night of rioting and looting and civil unrest”

“39 million Americans and 5 million Canadians have filed for unemployment”

“Oil prices go negative for the first time in history”

“The UK withdrawals from the European Union”

“US President Donald Trump has been impeached”

“The global number of people under some form of lockdown surpasses 2.6 billion – one-third of the human population”

“Megan Markle and Prince Harry exit their Royal duties” and “Kylie Jenner and the Kardashian’s exposed as fake billionaires” (the horrors!)

Indeed, a negative 1 percent return in 12 months is not very good, but yes, it's not doomsday. But how can we reconcile this relatively inconsequential point in time "loss" with the headlines and realties of the World we are in today.

I've got an excellent visual tool that was too large to put into this commentary, which has been helpful for me to put this into an understandable context. I have this summary and included this link.

SUMMARY OF ALL THE WORLD'S MONEY AND MARKETS: 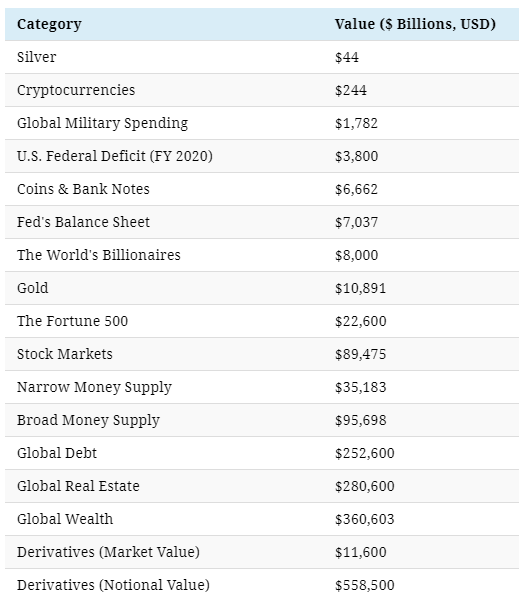 The rational explanation of why the market has fared so relatively well compared to how bad the headlines are is because governments around the World have virtually unlimited financial powers and abilities to prop up the economy.

Federal Reserve Central banker, Chairman Powell, after injecting more than 7 trillion dollars into the economy in the last two months, he reminds everyone that "we are not out of ammunition by a long shot." It isn't bravado. It's a reality of the powers and levers that he controls (in coordination with other economies in the World).

If anyone has heard the expression "Don't fight the Fed," this is what it means in a nutshell: For the time being, the Fed will do everything at its considerable disposal. There will be a lot more volatility, but "Don't fight the Fed" is analogous to "The House always wins." That's why the "market" isn't down much.

Of course, at some point, there will be a reckoning for this unprecedented stimulus. Indeed, this can't go on for infinity. Many theories have been suggested on what will happen: hyperinflation, the value of gold and other assets going up considerably, alternative currencies like Bitcoin, real-assets like land and homes will increase, the value of actual cash will go down significantly.

Go back to the Summary of All the World's Money and Markets. For sure, in 10, 20 years, these values will be different, and the relative size of the different classes will shift significantly. At the same time, the economy will recover, 50 million workers in North America won't permanently be out of work. There will be a vaccination.

Going forward, as investors, we need to be agile, thoughtful and tactical given these unprecedented times, while being mindful of what our long-term objectives are. Knowing what truly the level of risk and volatility we each can comfortably take, and ensure that our investments are always in line with these factors is more critical than ever.

I include an invite to a talk given by John Stackhouse, the former editor of the Globe and Mail, and Report on Business, and Senior Fellow at the C.D. Howe Institute. He's a very thoughtful and engaging author and speaker. In this, he will talk about some of these trends I've touched on, and how they will affect all of us and society at large.

With John Stackhouse, Senior Vice-President, Office of the CEO, RBC