So, I’ll do my best not to use the name of “that company” in this update, given the media coverage overkill it received last week. But the fact that...

...both you and I both know which company it is and the reason it was newsworthy says something.

What exactly does it say? One could argue that it shows stocks are mainstream again, in a way not seen since the late 90’s. Alternatively, the implication could be that government stimulus is creating unintended, speculative consequences with people stuck at home while receiving stimulus cheques. From an investor’s perspective though, it unequivocally says at least one specific thing: the risk of betting on individual stocks going down is now unacceptably high.

It is an unusual time for that to be the case, with equity markets sporting above average valuations and most developed economies still in some stage of pandemic lock-down. But the evidence is plain to see, given charts like this… 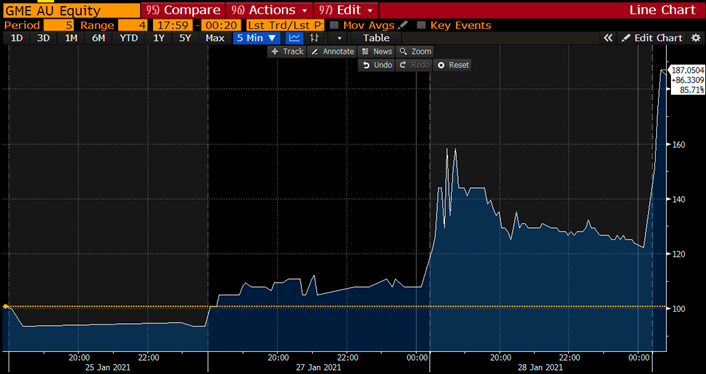 …and that’s just the share price of a random Australian business with no claim to fame beyond having the same stock ticker as “that company”.

There are a couple of ironies here. The first is that rampant bullishness among some retail investors managed to trigger a broad market sell-off last week. The true market impact of recent events isn’t so much from the outrageous price moves of a small-ish group of stocks, but rather from the corresponding and sharp increase in volatility that they have caused. Risk models that govern institutional investors who short stocks, like hedge funds, are sensitive to such changes. The main remedy available to bring risk models back onside in such moments is for these investors to reduce their overall exposure to equity markets. In financial terms this is called “degrossing”; in non-financial terms, it is called throwing out the good with the bad. A typical Value-at-Risk (VaR) based model will catalyze an investor to exit both winning and losing positions to reduce overall exposure when volatility spikes. This past week saw two of the five largest degrossing days among Morgan Stanley’s prime brokerage clients, and the largest degrossing day in over six years among those at Goldman Sachs. The broader equity market impact was an almost 4% drop over three days.

It is unclear how much degrossing is left to occur. The process is somewhat reflexive, since broad-based selling causes volatility to further increase, which in turn exacerbates the impulse to degross. But in the current environment, the risk is not systemic; the financial system is currently very well capitalized, and the total value of short positions in stocks with high short interests is meaningfully less than 0.01% of the overall US equity market. Barring some unrelated shock, any market correction due to this will be short-lived.

The second irony is that there is an anti-establishment bent to the recent financial fireworks. A narrative of vigilante justice being exacted upon hedge funds by an army of online retail investors certainly reads well, but it misses the mark. The reality is that many institutional investors and the corporations in which they invest are models of Darwinism, adapting quickly to make the best of unexpected market conditions, whether those are a global pandemic or a suddenly irrational share price.

For example, envision a company that has significant debt and is suffering from pandemic lockdowns. What might the company’s Board think if their shares, say, quintupled in price over the course of five days? The answer should be something like, “Quick, let’s sell shares to shore up our balance sheet!” That is exactly what AMC movie theatres did to the tune of US$300 million last week, utilizing a stealthy issuing mechanism called an at the money offering.

Better yet, what if you were an institutional investor that lent money to a company like AMC during 2020? You were helping in a distressed situation, so the company probably gave you a sweetener like the option to convert your debt into shares. That way, you’d earn a large profit if your support helped the company make it through to better days. But last week, the Reddit army gave such investors a wonderful opportunity to accelerate that profit – which is exactly what private equity firm Silver Lake Partners did last week, for example, earning a reported gain of over $100 million in the process. As vigilante justice goes, watching emboldened retail investors bail out corporations and gift windfall profits to large investors seems uninspiring. But hey, who are we to question their faith?

Rising above this short-term noise though, what has been very clear over the same period is the message coming from corporate earnings. Fourth quarter results have been an unequivocal positive – almost 40% of S&P 500 companies have now reported, and both the number of companies beating consensus estimates and the magnitude by which they are doing so are among the highest on record. In fact, if the current pace continues then Q4 2020 earnings for S&P 500 companies will end up ever-so-slightly exceeding those of Q4 2019…which of course was pre-pandemic. That is an absolutely stunning recovery.

In addition, COVID case counts are dropping rapidly both in Canada and down south, while about 10% of the US population has now received at least one vaccination shot. Add to this: 1) a financially healthy US consumer who has now received the next round of stimulus cheques; 2) even larger government cheques that are very likely to arrive in March/April; and, 3) unwavering support by major central banks to keep interest rates pinned at historically low levels. Plus, of course, there is also original point above – that the risk of betting against individual equities has become prohibitively high. While there is unquestionably some froth in financial markets at the moment, keeping faith in the larger forces that are driving the global economy and equity markets higher still seems well placed…just try not to get too distracted by the sensational sideshows.