The Dow Jones Industrial Average (aka “the Dow”), out of habit and tradition, is still widely considered to represent “the market” by individual investors in the U.S.

It’s no wonder. The Dow is by far the oldest major equity benchmark in the world, stretching back to 1896—it’s the “granddaddy” of them all. And it has a storied past. In good times and bad it has been the most-cited equity index. Even in recent decades, investors associate key events such as “Black Monday” in 1987 or major milestones like the first trip to “Dow 10,000” in 1999 with this blue-chip benchmark.

Changes in the Dow, especially as consequential as the ones that were recently implemented, can impact how this part of the market trades and how the U.S. economy is perceived.

Today the Dow looks quite different than it did before the changes took place on August 31 when three stocks were added (salesforce.com, Amgen, and Honeywell) and three were removed (Pfizer, Exxon Mobil, and Raytheon). Last but certainly not least, the simultaneous four-for-one stock split of Apple shares also altered the Dow’s structure.

The Apple stock split actually had a big impact. The stock went from representing a whopping 11.9 percent of the Dow’s total value to just 2.9 percent after the split, as the table shows. This is due to the unique method by which individual stocks influence the overall value of the benchmark. The Dow is price-weighted, so stocks with the highest price per share have the greatest influence on the Dow’s overall value and trajectory.

A major reshuffling of Dow stocks

*Any discrepancies in calculations are due to rounding

When Apple was first added to the Dow in 2015 at almost $120 per share ($32 split-adjusted), it represented 4.7 percent of the index. But since then, the stock’s price per share surged to more than $500 per share ($120 split-adjusted), climbing 320 percent, and its impact on the Dow rose significantly along the way. While the four-for-one stock split doesn’t change the total value or market capitalization of Apple’s stock, its representation in the Dow declines with the lower split-adjusted stock price.

The Apple stock split, combined with the other Dow changes, had the net effect of:

How the Dow changes impact sectors 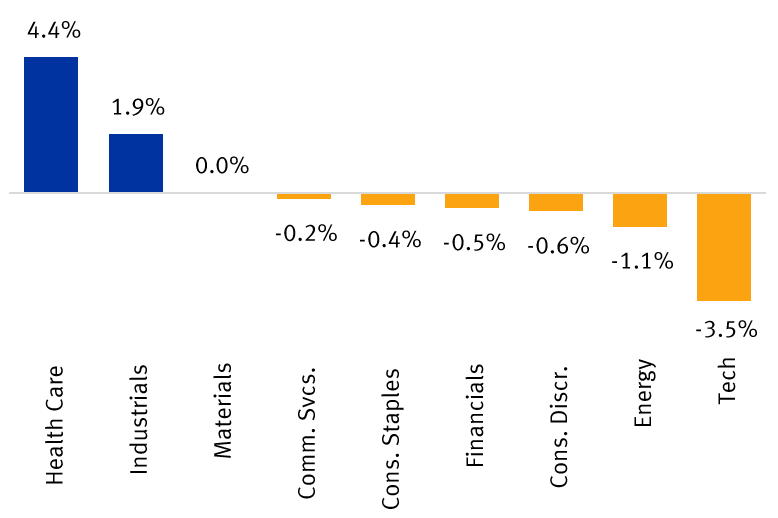 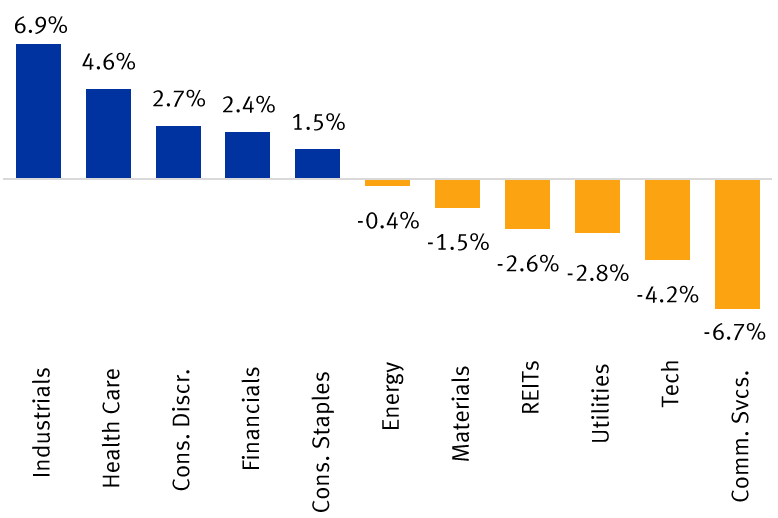 When comparing the Dow and S&P 500 benchmarks on a sector basis, the Dow now tilts more toward Industrials and Health Care, and has relatively less exposure to Tech and Communications Services than the S&P, as the lower chart shows.

The Dow ≠ the economy

We think the Dow is now more representative of “the market” than it was before, especially since Apple shares will no longer distort its trajectory.

However, we don’t view the Dow (or the S&P 500, for that matter) as being particularly reflective of overall U.S. economic conditions, especially in this COVID-19 environment.

Both of these benchmarks are made up exclusively of large, publicly traded corporations, many of which are multinationals. The sphere of mom-and-pop businesses, which make up so much of the fabric of the broader U.S. economy are not represented in these benchmarks—nor are they intended to be.

While there are loose sector representations—meaning, a favorite local restaurant or hardware store would technically fall under the Consumer Discretionary sector—small and medium-sized businesses face far different challenges and opportunities than large corporations. The COVID-19 shutdowns and restrictions have borne this out.

This is a key reason there is currently a disconnect between “the market” and the broader economy. Both of the major U.S. benchmarks have roared to record highs since the brutal COVID-19 selloff in February and March, while many small and medium-sized businesses are still struggling and some are at risk of closing their doors.

So when considering how “the market” is trading—whether via the Dow or S&P 500—it’s best to think of the major benchmarks as reflecting how the largest segment of corporate America is faring rather than the economy as a whole.