Meme stock episode: Is this a risk to traditional investment portfolios?

We think the GameStop episode is indicative of a megashift at play—one that’s bigger than the stock market. What does this mean for long-term investors?

GameStop shares have come back to earth, reaching an intraday high of $483 in late January but closing at $51.10 per share today, and other stocks that were caught up in this whirlwind have retreated as well.

Yet we get the sense there is still some unease among individual investors about what happened, and about the risks that this may pose for the overall market. Some are wondering, does this episode indicate there is something bigger going on? After all, another group of small so-called “meme stocks” have pushed higher in recent trading sessions.

To this we say yes, there is definitely something bigger afoot—much, much bigger.

However, the root cause is not necessarily top of mind and is not even market-related. Moreover, we don’t think the phenomenon is a serious threat to traditional investment portfolios.

A 21st century twist on the short squeeze

First, consider how the GameStop episode played out: It was a classic, painful short squeeze, but it unfolded in a novel and dramatic fashion.

Short squeezes have happened for many decades, and some of the most high-profile episodes even go way back to the Roaring 1920s when the total value of the stock market was much smaller. Many readers’ eyes would glaze over if we go into the details of how shorting works and how short squeezes play out, so we will forgo the particulars. (A simplistic definition from Investopedia is in the chart.)

What goes up during a short squeeze can come crashing down 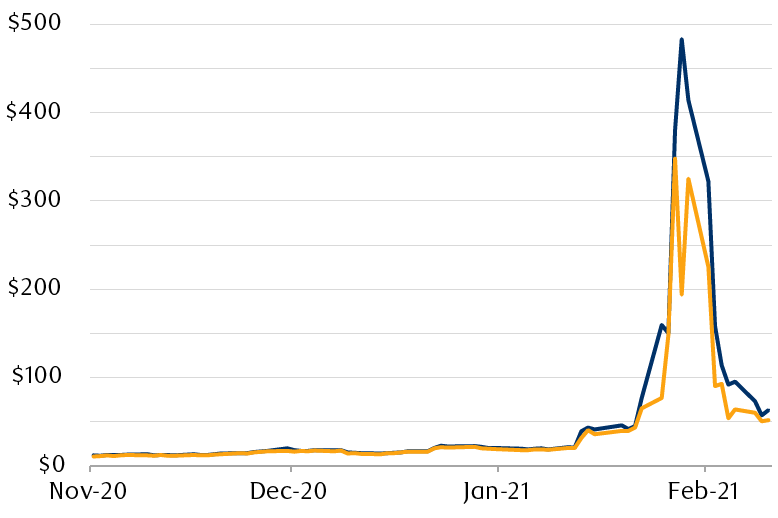 Short squeeze: "When a stock or other asset jumps sharply higher, forcing traders who had bet that its price would fall to buy it in order to forestall even greater losses. Their scramble to buy only adds to the upward pressure on the stock's price ... Short sellers are being 'squeezed' out of their positions, usually at a loss."
Source: Investopedia

The difference this go-around is the GameStop short squeeze unfolded in a unique way.

The proliferation and wide use of internet chat boards—in this case on the Reddit platform, primarily—opened the door for individual investors to communicate about their stock ideas and strategies to each other in real time.

Once they caught on that GameStop shares were heavily shorted (and therefore were vulnerable to a short squeeze), they bought the stock, effectively forcing many of the short sellers, including large hedge funds, to remove their short positions and buy shares, which then fueled a massive surge in price—and big losses for some hedge funds.

While any major short squeeze would probably gain press attention, this short squeeze was outsized as the stock surged 2,300 percent in just 11 trading sessions. Importantly, this drama exposed a development that had not been widely noticed before—some investors are using digital chat and other internet tools to form stock strategies. This short squeeze involved individual investors, some of whom are new to stock picking.

We think the far more important consideration is the root cause of this episode.

From our vantage point, the much bigger phenomenon that’s going on both underneath and above the surface is a megashift within society—the shift into the age of digitization.

The grip that digital technologies now have on day-to-day life has been accelerated by the sudden COVID-19 lockdowns and the tech tools that have facilitated working and living at home nearly 24/7.

This megashift, or period of megachange that some might describe as a new epoch, is not unlike those that occurred during the past 150 years. Think back to the megashift in the late 19th century when the agriculture-based economy transformed into the industrial age, or the megashift in transportation that was brought about by the steam engine and railroad system, or the megashift in international relations that was born out of the ashes of World War II as well as the additional shift after the Soviet Union’s collapse.

These and other megashifts impacted economic, governmental, technological, and cultural trends. They transformed immigration and internal migration patterns, societal norms, religious traditions, and more. They had life-altering and even civilization-altering implications.

Today’s digitization megashift is moving society at lightning speed through the proliferation of artificial intelligence (AI) and digital tracking, the advent of “smart cities,” new personal and business banking technologies, new currency structures (think cryptocurrencies), the convergence of the technology and health care industries, and a myriad of other technologies, some of which even raise ethical and moral dilemmas.

To us, the meme stock chat board phenomenon and greater participation of individual investors in markets are very small outgrowths of the digitization megashift.

Keep your eyes on the long run

What does this mean for investment portfolios?

In the narrow scope of meme stocks and heightened investor communication about stocks and investment strategies, we think digitization will further increase the participation of individual investors in equity markets and that this participation will be more active.

Some individual investors are now more research-oriented, are more focused on individual stocks rather than indexes, and are embracing the options markets. Just like any new investment cycle, some are diligently doing their homework, while others are trying to ride the bull market wave the “easy” way (which rarely works in the long run).

We think the participation of individual investors will grow in number and influence, at least until the next deep and lengthy bear market takes root. In the interim, this doesn’t mean that more GameStop-like episodes will automatically occur and it doesn’t mean they won’t. We don’t count out additional bouts of market volatility related to meme stocks.

There are a number of regulatory issues raised by the GameStop/meme phenomenon, and we think regulators likely will be slow to act. Rule-making authorities tend to be reactive and lag technological innovations and trends. Bloomberg’s regulatory and governmental analysts, for example, believe it could take up to a year for new regulations to emerge that will address this situation, and even then, they doubt there will be sweeping rule changes.

Overall, the meme stock phenomenon is unlikely to have a major impact on traditional, long-term-oriented investment portfolios, in our view. We think the specific episodes and related volatility will come and go.

But the megashift into the digital age is already having a major impact on our lives and we expect this will only accelerate. We think the broader digitization trends and the technological and lifestyle changes they inspire will impact investment portfolios and returns far, far more than the meme stock phenomenon.

This article was originally published in the Global Insight Weekly with the title “A ‘meme stock’ moment, or more?”

Is a stock market bubble inflating close to a bursting point?

We take stock of the signs of excess in financial markets and look at how to position portfolios through this period.

As the U.S. economic recovery continues, we look at the market forces and Fed policies shaping long-term interest rates.