More language to understand this week. Once you’ve determined whom you are working with and decided what you’d like to buy, the next question is where to invest the money. For the majority of investors there are two main types of accounts: Registered and Non-Registered. A Registered Retirement Savings Plan (RRSP), Registered Income Fund (RIF), Locked-In Retirement Account (LIRA), Locked-In Fund (LIF), and Tax Free Savings Account (TFSA) are all considered registered accounts as they have restrictions around them. A non-registered account is an account that you can invest money in outside of a registered account. Let’s look at each one.

An RRSP is an account you set up to contribute to when you are working and making income and then draw on later in retirement when you are not working. There are several benefits of contributing to an RRSP. First, you pay less tax and keep more money for you.

Some quick tax facts: Our tax system in Canada is set up as progressive, meaning there are different tax brackets for each level of income earned. Everyone can make approx. $12,000 and less and pay no tax. Those earning above $12,000 to about $40,000 are in the lowest tax bracket (tax brackets and rates change for each province), those earning approx. $40,000 to $80,000 are in the next bracket and so on. (See the tax table for BC). How much you can contribute to an RRSP depends on how much money you make in a year in employment income. The calculation for 2021 is 18% of your earned employment income up to a maximum of $27,830. Every year that you have employment income you are adding to your contribution room. If you ever want to know how much RRSP contribution room you have you can find it on your Notice of Assessment from the Canada Revenue Agency (CRA -who collects our taxes). See example below: 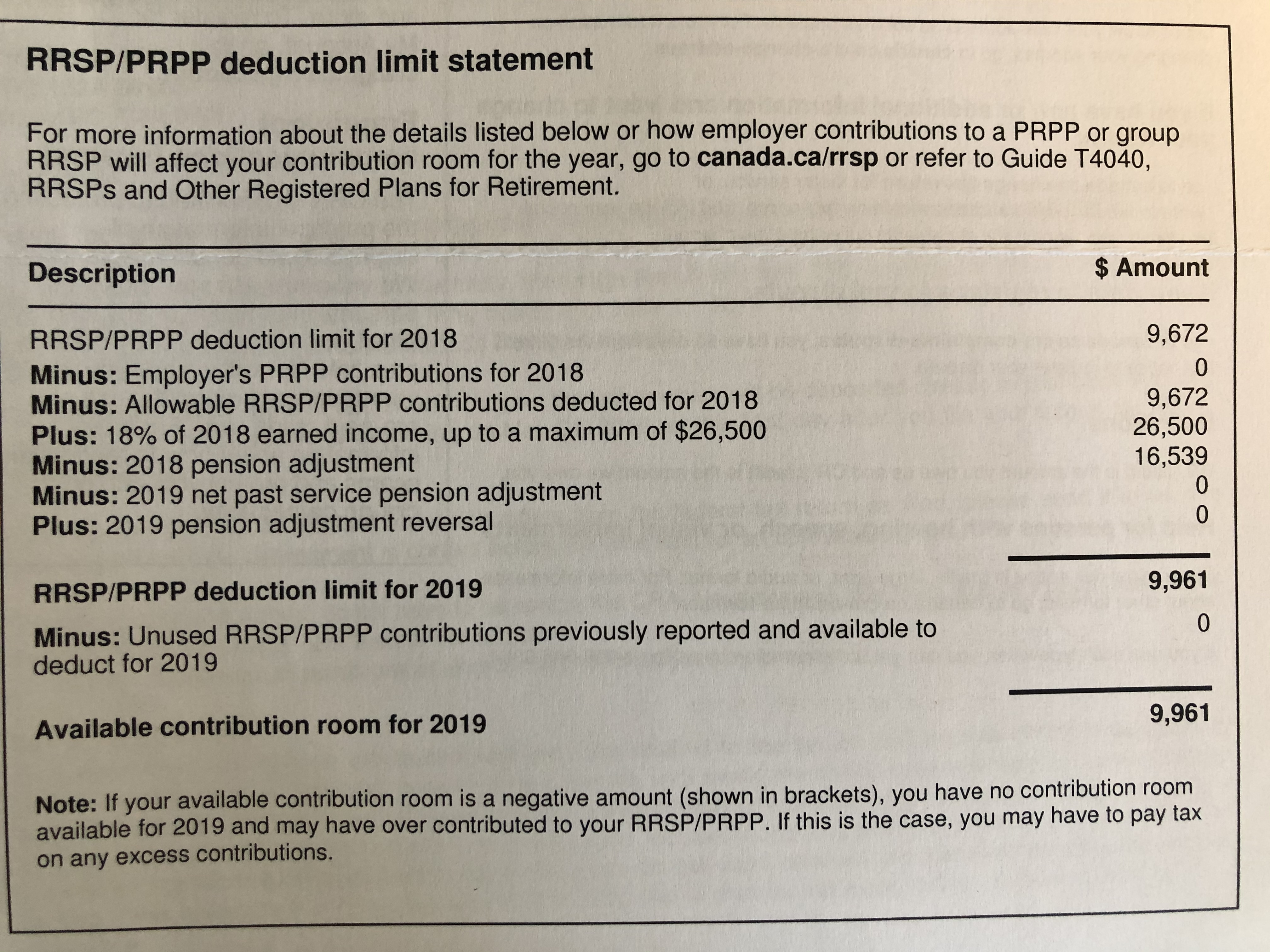 You pay less tax when you contribute to an RRSP because the amount you contribute can be deducted from your earned income each year when you do your annual tax return. For example, if I make $60,000 in employment income and make a $10,000 RRSP contribution, then I’ll pay tax on $50,000 instead of $60,000. So I’ll pay less tax. Second, once the money is contributed to your RRSP and invested, all income (dividends and interest), and gains (from investments going up and then sold), are not taxed annually because they are sitting in a registered account. If the money was put in a non-registered account then all the income and gains would have to be reported and tax paid on them each year. Because the income and gains in an RRSP are not taxed each year, we say the tax is deferred. This means the government gives you a tax deduction when you contribute and lets you defer all the tax while the account grows each year, but they still want to get some tax money from you. They get it when you start pulling the money out so you can use it in retirement. All the money you withdraw from an RRSP in retirement is income that you will have to pay tax on based on the table above.

The most common question I get with RRSPs is should I contribute to one? My answer depends on the scenario. The first scenario is typically from someone who has a low income and wonders whether it is worth it. It’s a great question. An RRSP should be thought of as money for retirement that you are going to invest and grow until you need it in retirement. It’s a commitment. There is some flexibility to use RRSP funds for first time home purchases, and that is certainly a good use, but apart from that, think retirement. Second, it depends on your level of income. If you are in the lowest tax bracket you are only going to save about $.20 on each dollar contributed. (See the tax table under marginal rate). In that case, another option is to open a TFSA and contribute the money there instead. You can grow the money in the TFSA and then when you earn a higher income, you can contribute a lump sum to an RRSP and use some or all of your contribution room that you have been building up each year that you’re gainfully employed. problem with this scenario is that it is easier to withdraw from a TFSA (I’ll explain why in the TFSA blog) and if you are not disciplined, it is easy to spend the money on lifestyle, instead of saving for retirement by putting the money in an RRSP.

The other fact about RRSPs that many people don’t understand is this: As long as you have the contribution room, you can contribute the full amount allowed but you don’t necessarily need to deduct on your taxes the full amount. A little confusing? Let’s say you make $30,000 a year and after several years you had $20,000 of contribution room built up because you never contributed to an RRSP. You then contribute the full $20,000 at once. The benefit of that strategy is threefold: That money will now be sheltered from tax, you’ve eliminated the temptation to spend it, and you have given yourself more flexibility. You may decide to only deduct $10,000 on this year’s tax return and deduct the other $10,000 plus whatever additional contribution room has built up in a future year when you know that your income will be higher.

The second scenario around whether to contribute to an RRSP comes from individuals who question whether RRSPs are an effective tax saving vehicle. I hear this argument from high income earners who have built up large RRSPs and even in retirement are earning a high income, not from employment, but from other sources such as their investment portfolios, real estate rental income and government and corporate pensions. They argue that RRSPs didn’t help them because they are now having to withdraw from their RRSP and pay tax in a high bracket because of their high income. They were heavily taxed on their high income when it was earned and once again when it was withdrawn from the RRSP. It’s a fair argument. RRSPs work best when you contribute when your income is high and withdraw when your income is lower in retirement which isn’t the case for everyone. However, they did receive the initial tax deduction and the benefit of all of those years of tax deferral.

In my blogs I have repeatedly discussed how I believe financial planning is an essential part of the wealth management process. It is similar to the GPS tool in your car – you plug in where you want to go (what are your goals?) and it maps out how to...

We all know death is inevitable. This bit of grim wisdom is front and center in the well-worn phrase, "the only two certainties in life are death and taxes." And yet, even though we are aware of the inevitability of death, I still find it surprising how...

Most people understand the need for insurance for their car, house, health, and some even for flight cancellations. However, I find that most people don’t really understand life insurance and its various applications. As a Wealth Advisor, my role is to...