I tend to avoid making many comments about economic data because there are far better trained people to get solid and educated analysis from than me. I will make an exception because the April LFS put out by StatsCan was full of jaw-dropping nuggets.

First, here is a chart of Canadian unemployment rates going back to 1976. The current unemployment rate of 13.1% is a whisker shy of the record from the recession of 1981-82. Expectations are that we surpass that high when May’s figures are reported in a few weeks. 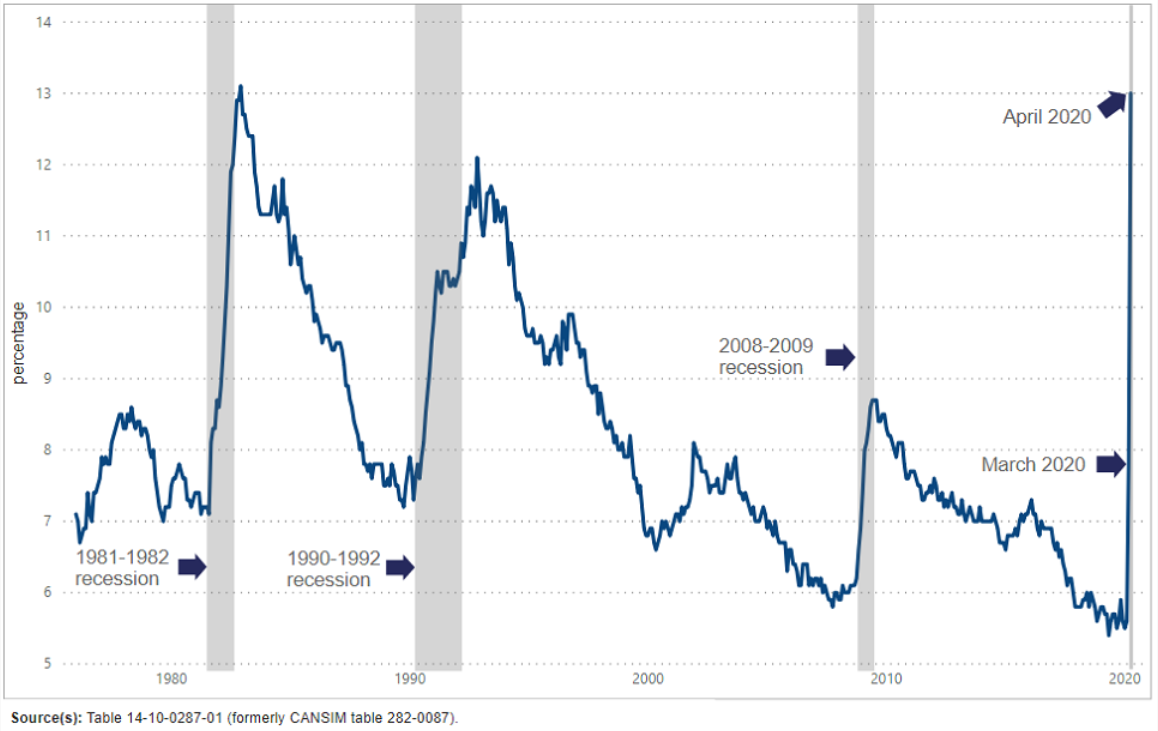 It’s not good, but there are uglier stats hidden deeper in the data that should have our attention. The one that stood out to me?

When one in three Canadians is working less than 50% of their usual hours that’s a thing that should jump out at all of us. That translates into roughly 6.8 million Canadians that are unemployed or underemployed. It’s a shocking figure.

Into the void has stepped the CERB support program. Thanks to Brendon Bernard of Indeed Canada for screen-capturing this info CERB claims from roughly the same time period as the LFS data.

So with about 6.8 million Canadians unemployed and/or underemployed, there were about 6.4 million claims for CERB Benefits. Sure there might be some delays in claims and people that have used immediate savings, but those numbers line up fairly nicely, implying that the people who actually need the government benefit are getting it.

There have been a bunch of stories in the past week about CERB benefits being paid to people that don’t qualify for it. These type of scoundrels will always find a way to take advantage, especially of a quickly assembled program like the CERB, but I think we can safely put the idea of large-scale inappropriate claims to rest. Many Canadians have seen significant impacts to their finances and the CERB is doing a decent job of helping support them for the time being.

What does the current data tell us about what’s still to come? Assuming the CERB application and unemployment claim data points are correlated and remain about the same, let’s take a look at CERB claims a month later. Here is the data from the week of May 10th.

In a month, there were about 1.5 million more applicants for CERB payments, although the weekly applications have slowed from 2 million in mid-April to 569,000 for this week. The initial shock of the shutdown is starting to slow but this data points to more job losses coming when official statistics are released in early June.

I’ve been in a melancholic mood lately because I know how awful unemployment can be for people. As we begin to plan for reopening our economy we must remember the above data. Starting to open businesses isn’t going to be a quick thing. It will happen in fits and starts and certainly not everyone is going back to a job that existed in January. The right plan will remember that behind each of those statistics, sits a human being. Someone with hopes and dreams and often a family that is sharing in the pain. Someone that hurts. We can do a lot of good if we remember that one simple thing.

You Can’t Ride Every Coaster

The stocks you miss

How long should your portfolio last?