No, You Take It

On a wild day in oil trading

Monday, April 20, 2020  will go down as a day for the history books. West Texas Intermediate Oil (the US benchmark that is often quoted as “the” oil price) went negative, meaning that you got paid money to take delivery of 1000 barrels of oil. I know what you are thinking right now:"Can I fit 1000 barrels of oil in my backyard pool?" 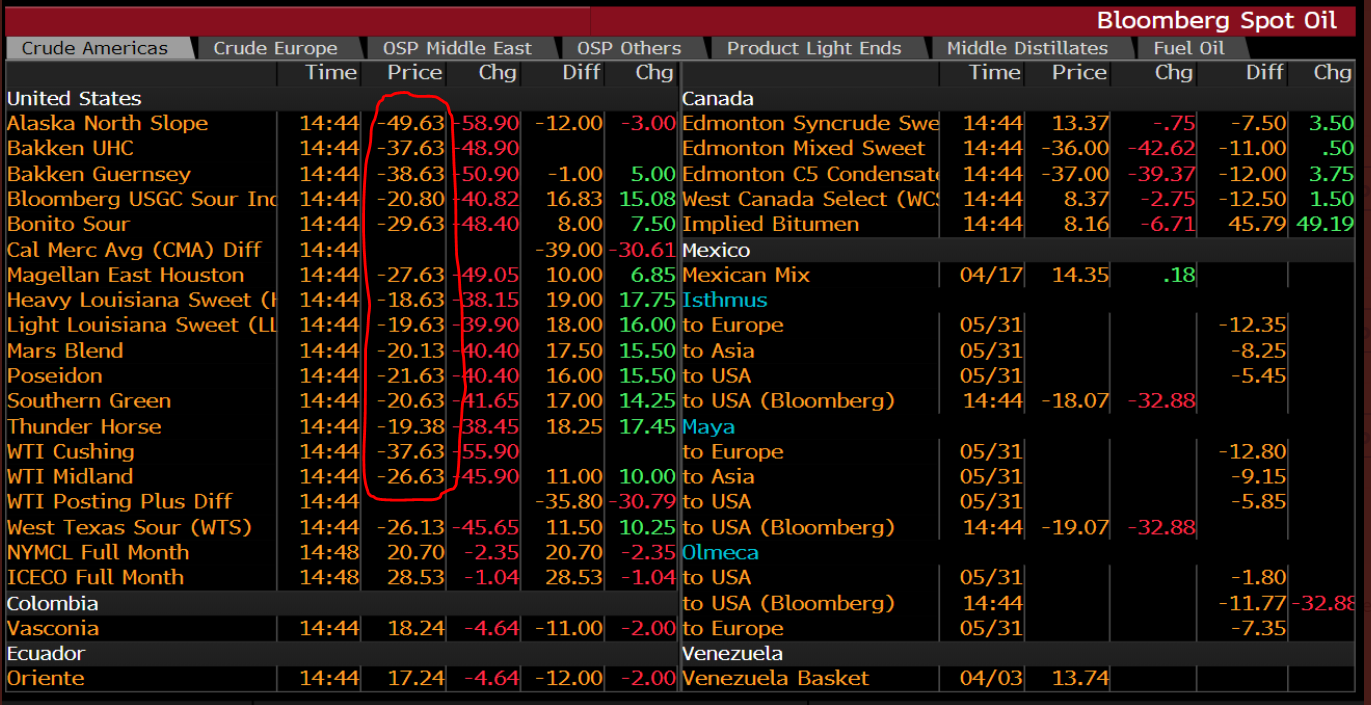 It’s a rather unique set of circumstances that created this day. The outbreak of coronavirus in China saw industrial production cuts which dropped global demand of oil by over 3 million barrels a day. That demand drop led to Saudi Arabia trying to push OPEC and Russia into cutting production to match the demand drop. Russia refused and two days later, Saudi Arabia announced they were going to flood the market with cheap oil. The spread of coronavirus beyond China’s borders forced many other countries to start lockdowns which further cut industrial demand but also demand from refineries that make gasoline things like airlines and cars. At the same time, Saudi Arabia and every other oil producing country, including Canada, kept the flow of oil going. It’s really hard to stop pumping oil once it’s started. It all contributes to an oversupply and a rush to fill available storage facilities.

Refineries still produce some products and they use futures contracts to secure what they need for future production. Well, the April contracts are for delivery of oil in May and they expire tomorrow. If you’ve got all the oil that you need, you move onto dealing with June production. Oil traders that help keep the market liquid are quickly the last people at the party and since they definitely don’t want the physical delivery of 1000 barrels of oil, they need to get out of their contracts. And the thing is, no one actually wants to fill up their backyard pool with crude oil. So now there are a bunch of people holding oil delivery contracts that don’t want to have the oil. How motivated would you be to avoid having to store all that oil? Pretty motivated I would say. Thus you get what happened today.

In our industry we have a term called the "short squeeze". A short squeeze occurs when a stock that has a huge number of people betting it will fail by selling shares short (meaning they don't own the shares they sell) doesn't fail. The squeeze comes when the company prospers and the stock goes higher, and short sellers are forced to buy the shares they sold back to make things even on the ledger. If the price keeps going higher, they are at risk of serious financial losses so they rush to buy the shares at almost any price - hence the term squeeze.

What we may have just witnessed was the first ever long squeeze, where oil traders that were holding the oil in hopes it would go higher, suddenly found themselves without any buyers that wanted to have the actual oil. In that case, they will sell at any price they can to avoid the delivery of barrels of oil on their doorstep.

I don’t yet know the impact of this happening. I think it’s mostly an anecdotal day for the record books and the long term trend of oil is much more important. Just another thing to keep an eye on as we navigate through this most unique of times.

What does our recovery look like? Many of us are nearing the end of 2 months in lockdown. I am thankful to still have a job that pays but I am mindful that many more have been furloughed or laid off completely. To give you an idea of the economic impact...

Preparedness in a post-Covid world