Could they be coming to North America?

If you have only been watching interest rates here in North America, you might think that interest rates around the world were also going up. If that is what you were thinking, then let me shock you with this fantastic graphic by Charlie Bilello. 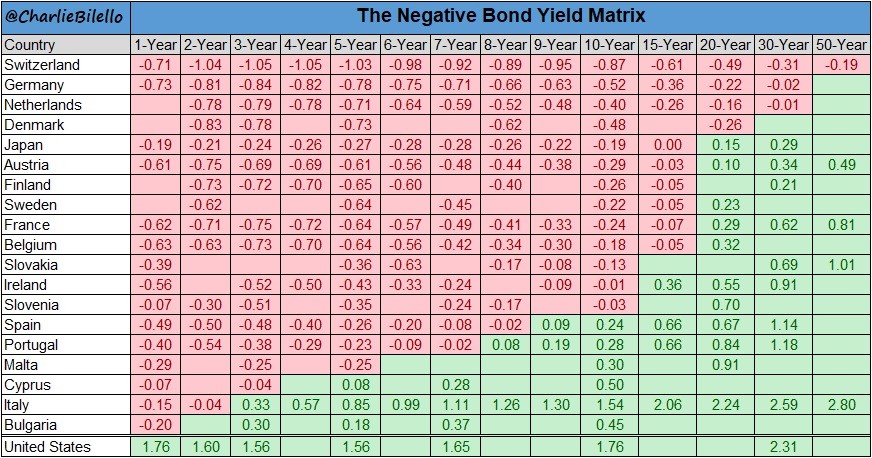 That’s a shocking chart to see, isn’t it? Nearly ALL of Europe is swimming in negative interest rates. If you bought a 30 year German Bond, YOU would have to pay the government of Germany for the privilege to lend them money. A Danish mortgage lender is now offering negative interest rate mortgages! No one alive has ever experienced this type of world where lenders have to pay to lend money. What does it all mean to you, though? Let me call in some reinforcements to help explain.

Fausto Hernandez of Verdad Capital wrote this handy piece on their blog recently about the declining cost of capital for US corporations. Hernandez points out that as technology has improved, it has led to incredible increases in efficiency and productivity for equipment. The machines have gotten much better. They last longer and do more. That increase in quality and capability has led to a decline in their cost. A corporation that can make more product with less money ultimately needs less money to improve their business. Less demand for money, over time, translates to lower cost for money. The cost of money is the interest rate. That was a broad simplification of a very technical structure, but you get the point. It became a bit of a virtuous circle as each new iteration of a machine brought costs lower still which meant the company didn’t need to borrow as much for the next machine.

By now you are trying to think ahead to the next step. Negative interest rates in North America. It seems illogical and I am certainly not calling for that to happen here. Europe and Japan have negative interest rates for a bunch of different reasons beyond the cost of capital point I just made. I will leave that to the economists of the world to decipher.

This post by Ben Carlson of Ritholtz Wealth Management is a fantastic breakdown of how negative interest rates could impact investors in North America. There are two takeaways I fully support. First, dividends will matter and matter a lot to your overall return. I believe that companies that can grow their dividends AND their business will do better than companies that pay higher dividends but have run out of avenues to grow their business.

Second, bonds will still be important, but for protection not yield. Obviously, if it’s costing you money to lend money, you aren’t in it for the yield. Switzerland and Germany are considered the most secure economies in Europe which is why they have negative rates so far out in their maturity profile. Consider negative interest rates as similar to the cost of home insurance. You don’t want to pay it, but you will be happy you did when times get stormy.

In a world awash with negative yields ($13 trillion dollars are accounted for in the above chart) it pays to be calm and clear about the possible impacts should they come to North America. If you started investing years ago, it is time to start thinking of the possibility of even lower interest rates. It’s not ideal, especially for very conservative investors and it may even force you to adjust your asset mix to fit your needs. I hope it doesn’t come to this because it will be difficult for everyone but I won’t ignore negative rates as a POSSIBLE outcome and neither should you.

If you want to understand how negative rates could

What does our recovery look like? Many of us are nearing the end of 2 months in lockdown. I am thankful to still have a job that pays but I am mindful that many more have been furloughed or laid off completely. To give you an idea of the economic impact...