Markets weathered two key U.S. events this week. While each highlighted near-term uncertainty, it’s a reminder that what matters is the long term.

This week’s Federal Reserve meeting was never expected to deliver much in the way of fireworks, but it did start the clock ticking on the next phase of monetary policy: tapering asset purchases. Much has been made about the Fed’s need to see “substantial further progress” on inflation and employment as it nears a decision on that front, especially as policymakers have been less than forthcoming about what “substantial” actually means. But for the first time, the Fed’s official statement was updated to acknowledge that progress has indeed been made toward those goals. Perhaps stating the obvious, but a sign nonetheless that the Fed is one step closer to making the call that economic conditions warrant a slowdown in bond buying.

We now enter a key two-month stretch for the Fed that will feature the Aug. 26–28 Jackson Hole Economic Symposium—where Fed Chair Jerome Powell is scheduled to speak and which has historically served as a forum for major central bank policy shifts—followed by the September Fed meeting. With markets focused on one or both to provide the first concrete details on how the Fed plans to approach tapering, our view largely remains the same: it doesn’t really matter. It’s clear the Fed will follow the same playbook from 2013 and 2014: announce, start, and proceed gradually. We think the market understands this.

Of course, inflation once again featured heavily during Powell’s press conference, but the narrative was largely the same: near-term pressures have been driven by specific sectors of the economy, and are expected to fade. The Fed is still focused on longer-term inflation expectations, and the fear that they could become unhinged from the policy goal of price stability. But as highlighted once again, “Indicators of longer-term inflation expectations appear broadly consistent with our longer-run inflation goal of two percent.”

And that dynamic can be seen in the chart below, as the July University of Michigan Surveys of Consumers reveal that consumers still see inflation as only being temporary, whereas long-term inflation expectations remain essentially in line with historically average levels. The same dynamic persists in market-based pricing of the inflation outlook as well, which has actually declined in recent weeks. 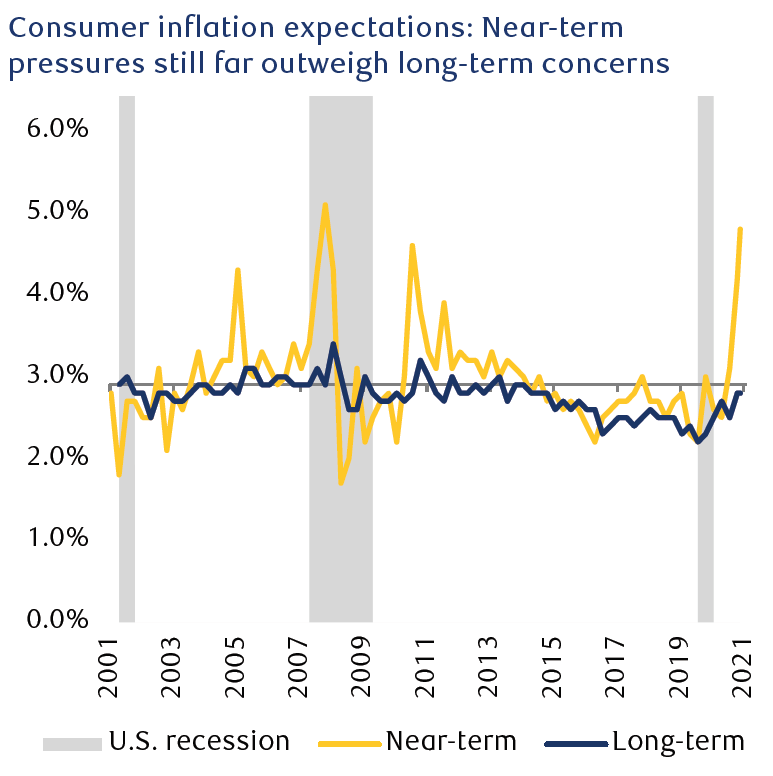 Also notable from this meeting was Powell’s attempt to decouple the Fed’s tapering plans from the future rate hike process. While current economic conditions may in fact warrant a reduction in bond purchases, it does not necessarily mean that they too will warrant rate hikes when that time comes.

The market has traded with some trepidation because of the idea that tapering asset purchases comes first, followed then by rate hikes. In our view, the Fed will likely hit the reset button if and when the tapering process is completed, potentially in late 2022, and will then take a fresh look at the inflationary and labor market environments. Put another way, starting the clock on tapering in no way starts the clock ticking on the next rate hike cycle.

If you can’t build it, they won’t come

Next up was the first look at Q2 GDP, which significantly missed consensus forecasts, printing at just 6.4 percent on an annualized basis against expectations of 8.4 percent. However, the details of the report were perhaps more encouraging than the headline shortfall would suggest for a number of reasons.

What’s interesting is what contributed to growth, and what did not. Consumption data on goods and services was well ahead of expectations, a sign that demand remains robust as the economy continues to reopen, particularly for services as demand shifts away from pandemic-driven goods spending. But the drag on growth came from negative readings on residential investment (on a lack of housing supply, a decline in inventories), yet another sign of supply chain constraints, and from a pullback in federal government spending compared to past quarters—which could reverse with an infrastructure bill.

That’s where the bright side comes in. Those kinds of factors typically mean that spending and growth have simply been delayed to future quarters, which could be key as investors increasingly ponder what this business cycle—and its durability—is going to look like. There have been some fears that a too-rapid recovery might actually risk shortening this expansion after a short recession, which the National Bureau of Economic Research recently dated at just two months long in 2020.

As the chart below shows, there is at least some correlation between the length of recessions, and the length of the subsequent economic expansion. Where demand remains robust, perhaps the supply-side constraints will act as a natural speed limiter, adding longevity to this expansion which has already entered its 15th month. 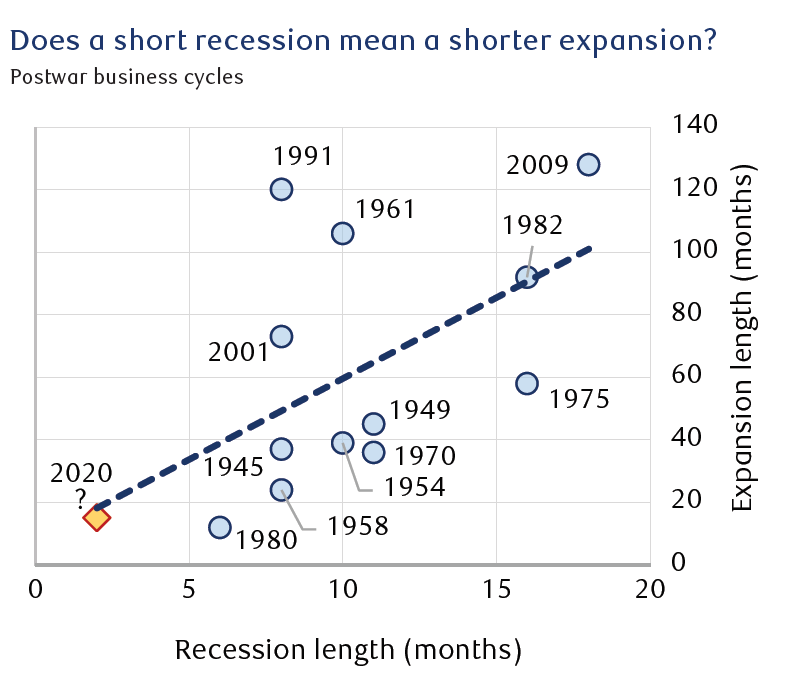 As we have so often said over the past year, just as the pandemic was unprecedented for the global economy, so too will be the recovery. The recent volatility in certain economic data has only confirmed that, while the Fed has worked to finesse its near-term messaging in an environment of persistent and heightened uncertainty. Markets largely took these events in stride this week, with Treasury yields holding steady and U.S. stocks setting fresh record highs, perhaps taking the long view: the Fed will likely remain accommodative for years to come, and even amid fits and starts, the economy remains on the right trajectory. 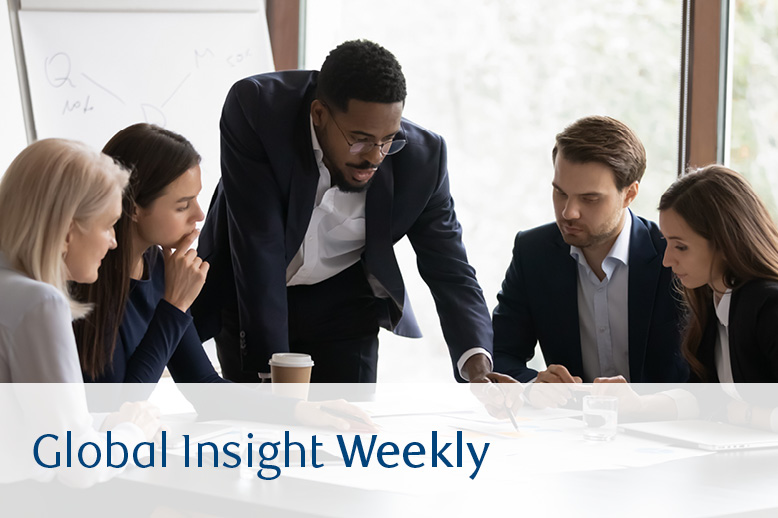 A transition period is coming for U.S. equities

As the investment landscape changes, we look at four issues that should set the tone for the U.S. stock market for the rest of the year and into 2022. 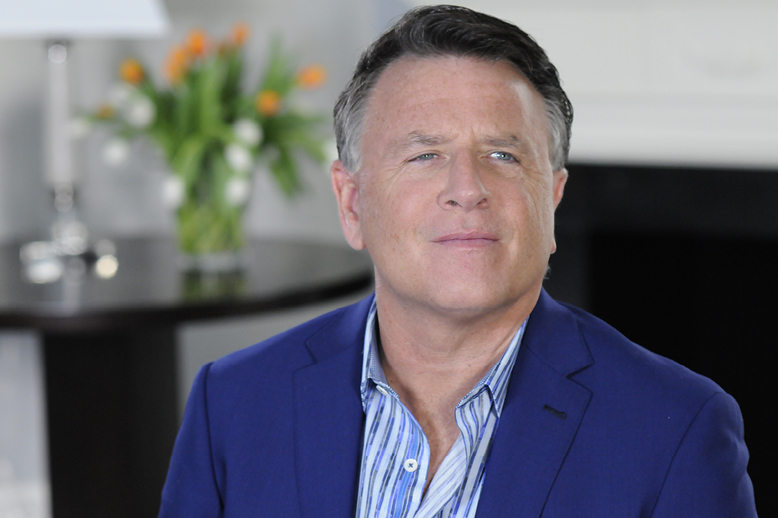 How the Wealthy Barber manages emotions when it comes to investing 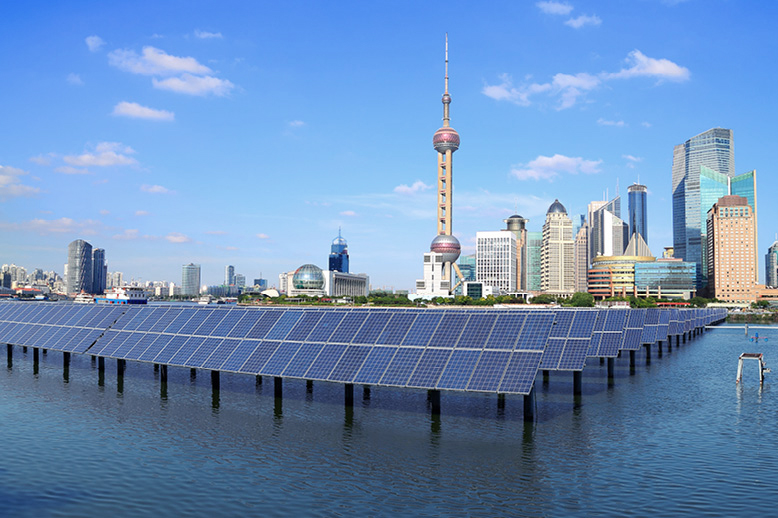