I was reading through our Global Insight article and thought it was very well done given what we have seen recently in the market.

It has been an interesting few years that have brought about many changes within the global trading landscape.  Since 1995 with the rise of the World Trade Organization as well as regional agreements that have facilitated the rise of global trade there has been an ever increasing idea that goods do not have to be manufactured for just the country they are produced in.

It feels like not that long ago we were heralding the signing of NAFTA and the coming together of three countries in order to work towards mutual success, in many respects this did have the desired effect but did not come without its challenges.  Through many revisions and even the occasional disagreement within the framework of the agreement, most people would say that the gains that were brought about by that agreement outweighed the detractions.

However, today we tend to face something completely different.  There seems to be an air of suspicion and protectionism that is permeating all of the international interactions that are occurring.  If you are anything like me, I wait for the G8 and G20 summits to see the interactions of our world leaders in front of the cameras.  It is a time where they are all forced to sit down and speak to each other.  Couple these with the OPEC summits and other regional organizations and these gatherings bring about the heads of most major countries and allows them directly to interact rather then through delegations.  Ideally these meetings can and should bring about mutually beneficial relationships between our heads of states.

In todays global landscape however we seem to have a reset button being pressed.  It seems that virtually all of the trade agreements that have been created are being renegotiated.  One of the major catalysis is the United States and their viewpoint is interesting when viewed through the framework of parity and who should benefit from trading agreements.  If we look at trading from the viewpoint of the United States their unhappiness does seem to be backed by trading data: 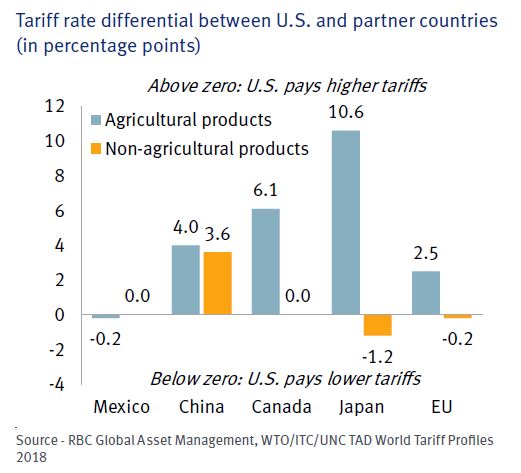 When we look at it from this standpoint, one might begin to understand why there would be a feeling that others are taking advantage of the United States.  Whether tariffs are the correct course of action would be a completely different conversation, but perhaps we begin to see why they were used.

If we look at the two largest economies in the world in the United States and China the impact that their prolonged trade war could cause both economies to have a drop in GDP.  However, currently the damage from tariffs have been minimal.  As we near the 2020 elections their is continued optimism that both sides would see benefits from securing a deal.

If you would like to read the whole article you can find it here.

Are you worried about global trade and the escalating tariffs?

Paul Philps, CPA, CMA  is a wealth advisor for Dominion Securities where he helps clients from across Canada to plan and protect their financial future.

Financial Markets Monthly - July 2020 The equity market rally that extended from late-March to early-June—pushing the S&P 500 within 5% of February’s record high—faded over the past month as investors balanced improving economic data with concerns about...

The Wealthy Barber on the markets, economy and the current business environment

“I'm still a long-term optimist, there are definitely challenges out there now, but I feel good about where we're headed.”