It has been said that the market goes up on an escalator, and down on an elevator, and 2022 has certainly proven that to be true. The narrative continues to shift, but bad things happen and often evolve quickly.

The markets are fascinating as they are ultimately driven by human behaviour and sentiment, and there has been no better time to highlight these shifts than the last few years. We went from despair in the depths of Covid, to extreme greed driving decision making in the bull market that ensued, to fear taking over during the recent correction. If you have a few minutes to read one of the best financial writers out there (Howard Marks), he speaks to this very issue in his more recent memo posted this week (which you can find HERE).

In short, fantasy is out and fundamentals are in. The markets are getting back to reality. It’s about time…

Market corrections are never pleasant, but we have to check our emotions, avoid ‘bad’ behaviour and rely on the plan and process. Corrections are common and very difficult to predict. Since 1980, the S&P 500 index has fallen an average of ~14% in any given calendar year but is positive 78% of the time for the full year. In the middle of the storm, it’s often difficult for many to look ahead.

I wrote a brief note to clients during the month where I noted “if you’ve been around long enough, we’ve seen this movie before, and history often rhymes but there are always unique aspects of every market environment. The markets are currently grappling with inflation, rising rates, the economic outlook, the war in Ukraine, and China lockdowns/slowdown. But, watch the financial media as, like all forms of media, negativity sells, the ‘bearish’ argument always sounds smartest, and you will always hear doomsday predictions even during bull markets. It’s best to step back and stick to the plan and process, especially in times like these.”

The general market narrative has shifted of late from worries of incessant inflation towards risk of recession and timing on that front. Unlike what many may have you believe, it’s not a foregone conclusion, as is the depth of the potential slowdown. And the ultimate implication of an economic slowdown is its effect on the earnings outlook – so even though the S&P 500 is down ~15% from its January peak, forward earnings expectations (2022 and 2023 expected earnings per share) have been revised higher by the research analyst community by ~3% over the same period. So valuations look much better than they have in some time.

So, the million dollar question in a market like this is always ‘have we seen the bottom?’, and therefore the outlook from here. Sentiment is at the lowest level we’ve seen in ages, so short term rallies can be expected at a minimum. And if this is just another ‘growth scare’ like we’ve experience a number of times in the last decade or so, we can look forward to healthy gains from here. If a recession is looming, history suggests that the market could see further downside. Consensus is strong that we will see a ‘bear market bounce’ as we’re seeing now, and then will continue lower from there again before we get thru the current correction. But remember, from Bob Farrell’s 10 rules of trading, rule 9 states that “when all the experts and forecasts agree - something else is going to happen.”

As I noted in last month’s memo, I believe that we have are seeing many similarities with the 1994 period of market weakness where both bonds and equities fell together as the market wrestled with fast rate hikes simultaneous with slowing fiscal spending as governments addressed deficits. The market got through it and it set the stage for a strong rebound in subsequent months and quarters.

Our goal in our portfolios is to preserve and grow capital over the long-term. So we remain defensive but opportunistic. On this front, increased our defensive positioning even further in the last few months. Luckily, our strong ‘bearish’ call on bonds over the past year and a half has proven prescient. Having tactical exposure to gold, infrastructure and real (commodity) assets has also helped, as has a very significant exposure to ‘hedged’ strategies. These have combined to mitigate the downside capture of the portfolios and helped to preserve client capital.

As an aside, here’s something I will leave you with to keep a shred of optimism in the back of your mind. You won’t see many optimistic scenarios articulated in the media or online since negativity sells, but the probability of the following outcome certainly isn’t zero:

Could the narrative actually turn soon? Consider this: household consumption patterns are changing quickly, with people not spending nearly as much on ‘goods’ but rather services. So the numbers will show more strength in the latter as we move thru summer and people get out and experience the world again. The weakness in goods spending is now showing up in strength in services spending already. Goods purchases will decline, helping the inflation dynamic. Inventory buildup eases, as does pressure on supply chains, and inflation moderates. This eases pressure on central banks to keep raising rates. The ‘growth’ narrative takes hold and accelerates into 2023. Investor sentiment is desperate for a positive narrative, and embraces the new reality. The market sniffs this out before it makes news as it always does, and leaves you wondering how it moved up ahead of all of this taking hold (remember spring/summer of 2020 anyone?!).

Is This Your Typical ‘Growth’ Scare or Something Deeper?*

If we are seeing a similar growth scare like we’ve seen a number of times in the last decade, we may be through the worst of the recent correction. 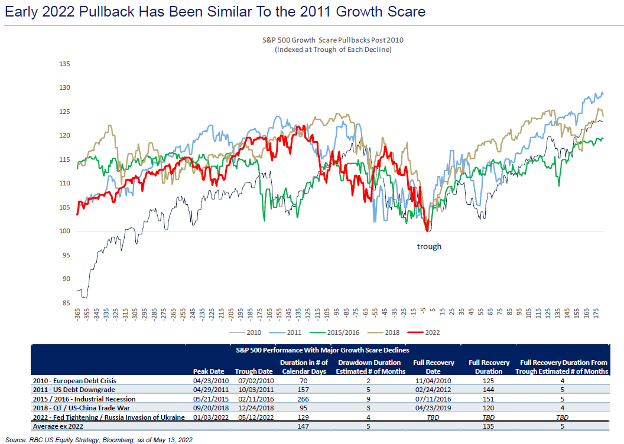 If this is the case, we can potentially expect solid near term returns from the lows: 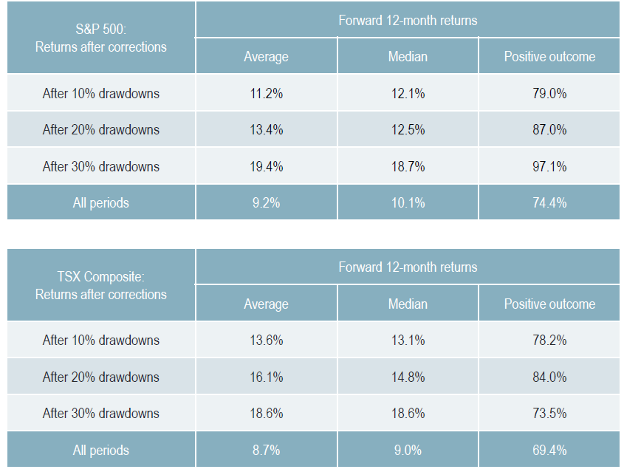 But did you know that there has been only four times that the S&P500 had a Bear Market without a recession since WWII? 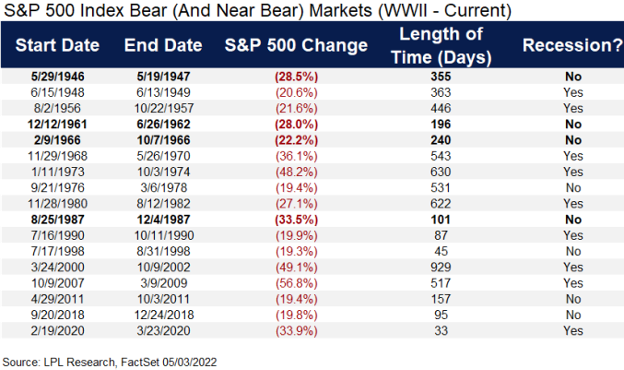 Inflation is Coming Off the Boil*

We can’t have inflation continuing at a torrid pace with data points like these. And I’ve written in the past that we may even enter a deflationary environment in the coming years because of 3 “D’s” as David Rosenberg puts it – debt, demographics, and disruptive technology. But let’s worry about that later. Supply bottlenecks are disappearing quickly now, which means suppliers will have a tough time raising or even maintaining prices. 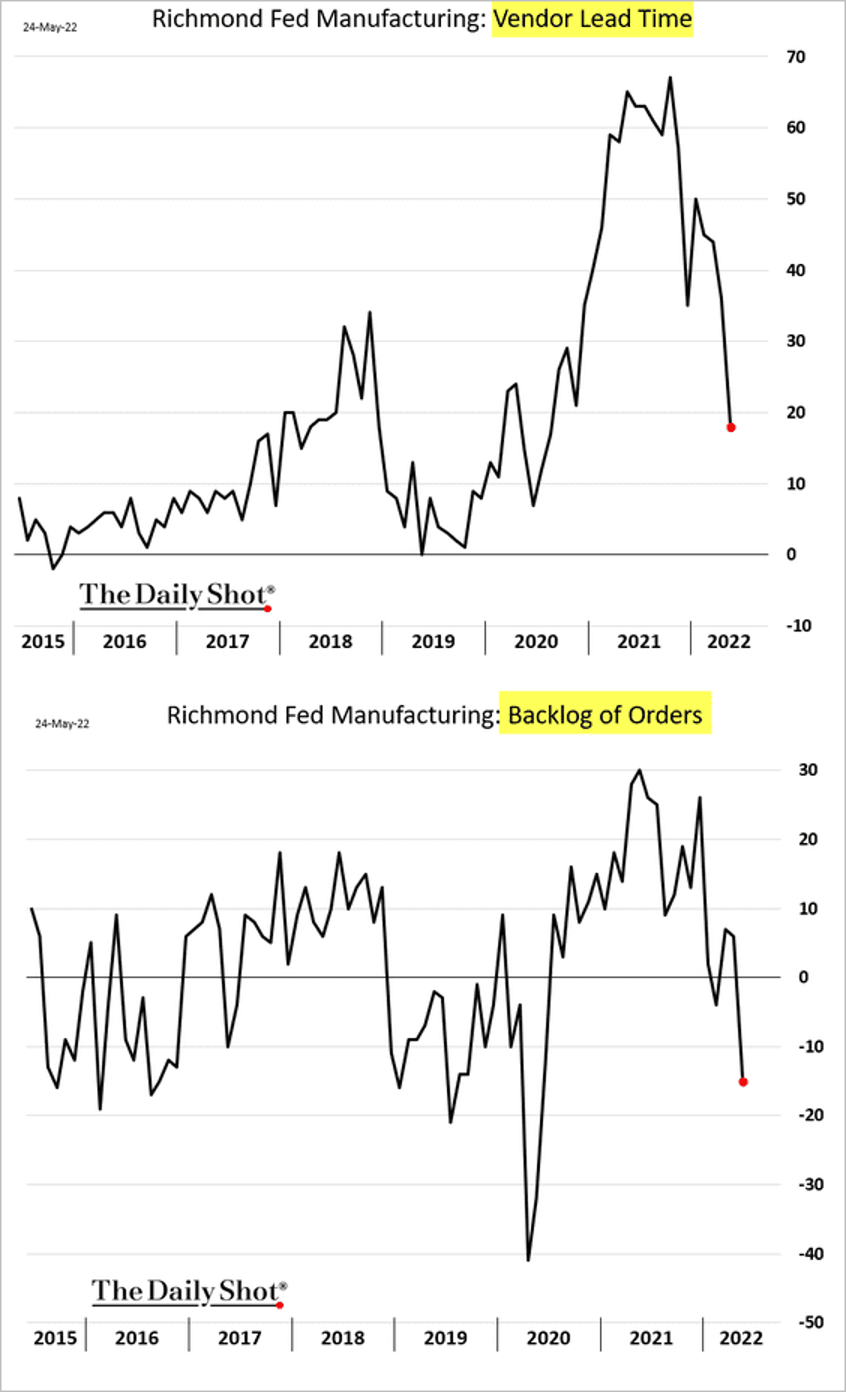 ‘Deglobalization’ is scaring many on the inflation front, and would make supply chains much less efficient overall as many countries bring back home the production in many goods. In fact, this was a big topic of discussion at the OECD summit in Davos last week, as there is a wide spread believe that this is occurring which is helping to drive up inflation. But the numbers don’t show that it actually is occurring, so these fears are likely overblown: 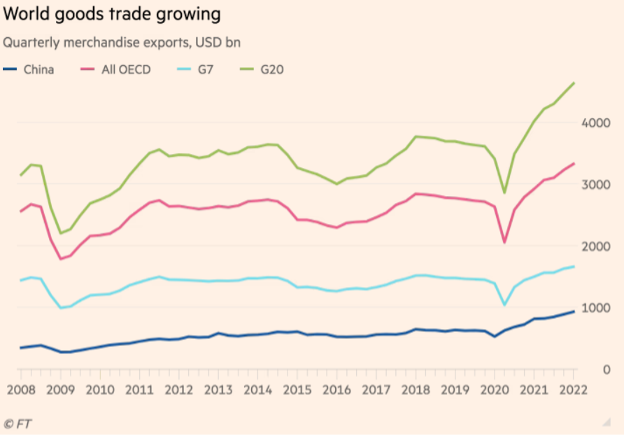 So, if inflation has in fact peaked, that has important market implications. While stocks have typically struggled when inflation is rising (as we’ve seen!), markets act significantly better after inflation peaks. Jim Paulsen from the Leuthold Group points out that “since 1950, the S&P 500 Index has posted a total return of 13% on average over the next twelve months following 13 major inflation peaks, data from Leuthold show. In the 10 instances where the index rose the year following a substantial inflation spike, the total return for the S&P 500 jumped by an average of 22% over the subsequent year.”

So the Million Dollar Question Is “Will We Get A Recession”? *

We’ve seen some parts of the yield curve invert which sometimes precedes recessions, along with other potential indicators like the oil price spike and weak consumer sentiment. China’s growth prospects are being hit by lockdowns, corporate profits are being pinched by rising wages, households are experiencing soaring energy costs and the Fed’s is obviously cranking rates and pulling back the punchbowl.

However, balance sheets are flush, and the consumer is experiencing employment gains, wage gains, and lots of pent-up savings, and they’re spending those savings. Supply chain snarls are finally unwinding, and inflation indicators seem to have rolled over, so we may have seen ‘peak inflation’ as noted above.

The Investor Cash Pile is Highest Since 9/11 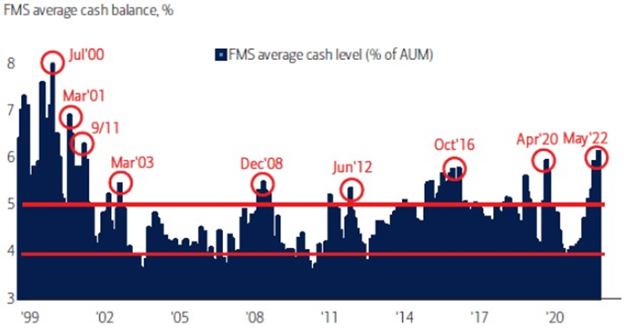 Credit spreads in the bond markets are another positive data point – this is an important indicator of stress in the system. They haven’t widened materially, so nothing to see here on this front.

Economic data is mixed, but is generally not flashing significant warning signs (in the US and Canada that is, Europe is another story). As this year progresses, the economic data will likely cool a bit, so expect recession chatter to continue. But consumption is still growing, the labour market remains robust, and capital expenditure is positive.

If we do see a technical recession, don’t expect it to be brutal like 2000 and 2008. Today, we simply do not have the same economic and financial imbalances as we had prior to those periods. Structural factors argue for a slowing of growth, and perhaps even a modest decline for 2 quarters or so (the technical definition of recession), but not a bona fide financial crisis.

Purpose puts it best in noting that “it is way too early to start drawing conclusions or positioning in our view. Always good to be early, but if you're over a year or two early, well, that is just wrong. The majority of our market cycle indicators remain positive.” 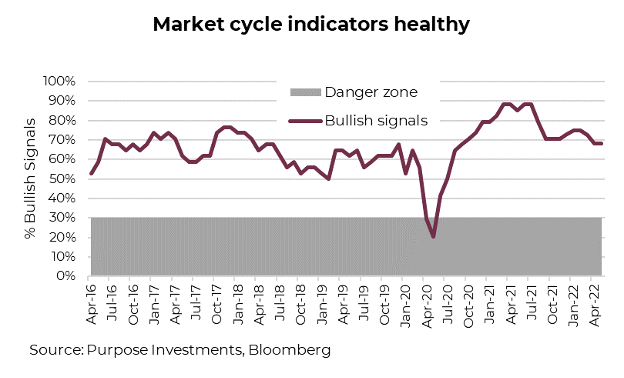 This said, we may not skirt a recession by any means. And if the market sniffs this out, there could be further downside yet to equities as the total pullback usually is ~30% in this scenario: 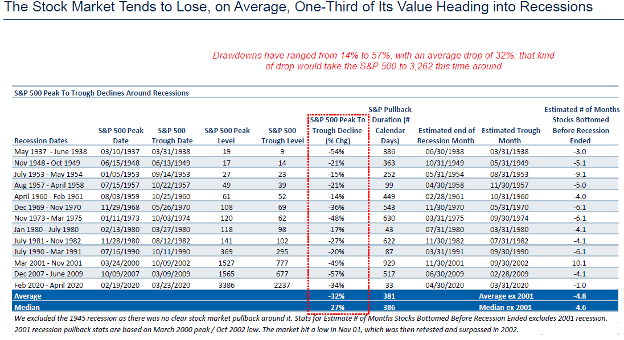 Returns Coming Out of a Bear Market Are Traditionally Very Strong * 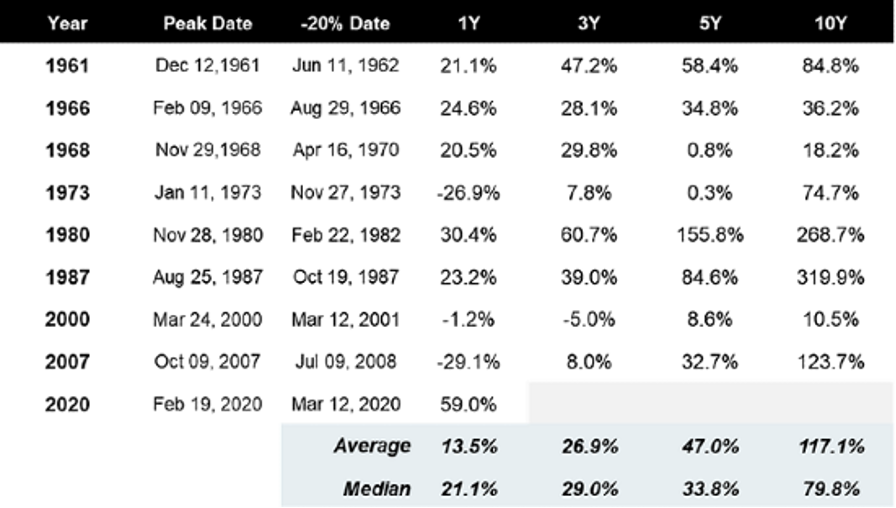 How Are Your Index Funds Doing? *

I’ve harped on this multiple times in the last 6 months (‘Friends Don’t Let Friends Buy Index Funds Part 1, 2, 3), but I’ve had high conviction in the idea that we’re finally moving away from the outperformance of passive management to active. That has certainly proven to be the case this year, and likely remains so for some time.

Before the Global Financial Crisis, 55-60% of a stock’s movement was attributable to ‘idiosyncratic factors’ (meaning stock-specific factors). That fell to 30-35% during QE2 in the 2012-2014 period, then normalized in 2017 to March of 2020 when ~50% of what was driving stocks was idiosyncratic. But, post-COVID, less than 20% of a stock’s move is based on its fundamentals and the other 80% is driven solely by macro economic factors! This is why two different companies, but labeled ‘growth’ stocks, move the exact same amounts even though they may even be in completely different and unrelated sectors. They’re all part of a “growth” trading basket (ETF and swap) which has correlated that whole sector. So, many stocks weren’t trading on company fundamentals because of this dynamic for a long time. There are a number of reasons for this, including macro influences driving up correlations – but that has ended. 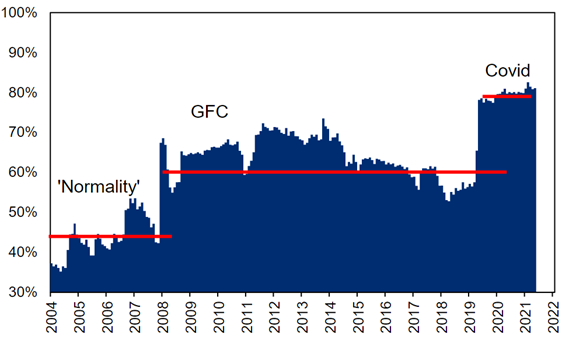