“A bull market is a bull. It tries to throw off its riders.”

We are in the midst of summer, and the markets continue to climb the wall of worry as they tend to do. Many equity market indices are hovering near records amid low interest rates and surging corporate profits which have reclaimed pre-pandemic levels. Amidst all of the doubt, a number of S&P 500 companies have announced second quarter results, with 88% exceeding expectations. But investors are paying a high price for those earnings, inflation remains worrisome, and yields remain very low. With the S&P 500 trading more than one standard deviation above many analyst’s “fair value”, returns will likely prove more difficult to come by moving forward, and volatility and headline risk will remain high – the market is vulnerable should the positive outlook deteriorate. Volatility and price choppiness has picked up in recent weeks with delta variant concerns and lack of a substantial pullback this year leading to growing anticipation of a market correction.

As I continue to recommend, fortify your portfolio with uncorrelated product – the pure stock and bond portfolio of the past is unlikely to handle noise very well in the environment we’re likely to continue to experience. Working with an advisor with access to and intimate knowledge of the world’s leading managers to help implement the highest quality companies and strategies into your portfolio will be paramount to a healthy return profile moving forward.

Market Strength Could Continue into the Back Half of the Year* Earnings season is wrapping up, and the bottom line is that virtually all of the “systemically important” companies have produced earnings results that are very good. And importantly, few CEOs have warned about a loss of activity despite the rebound in COVID cases and the economic recovery remains strong. Forward estimates remain robust as well, so there are no massive red flags on this front as of now:

But This All Doesn’t Come Cheap*

Valuations of virtually every asset are high by historical standards. This includes equities. Following is a chart showing price to sales ratios of S&P 500 stocks for example: 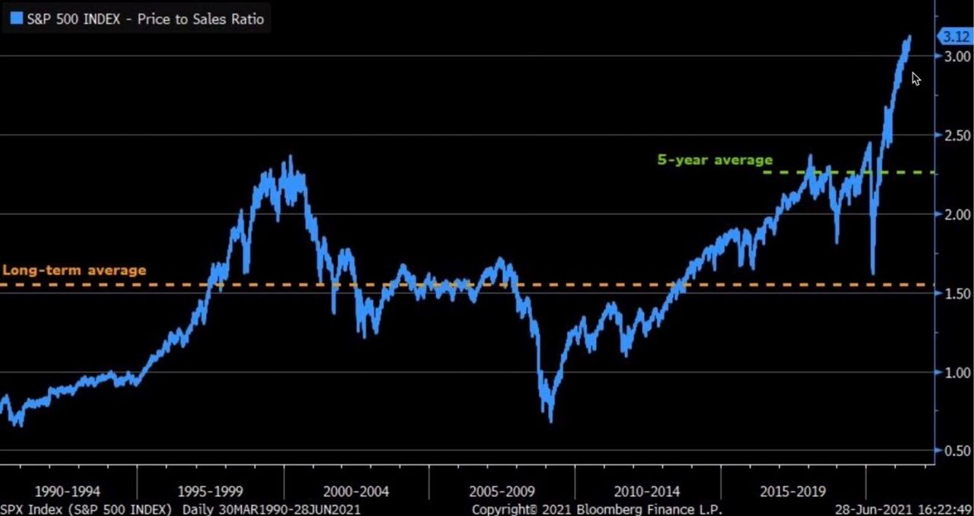 However, the fears of a valuation-induced market crash are likely overblown at this point. Recessions are the ultimate bull market killers, and there is no sight of a recession on the horizon. Fed policy is accommodative and it is expected to be easy for some time. While US valuations may be high, that alone doesn’t necessarily mean that the S&P 500 will experience an outright bear market in the near future, though expect the risk of ‘air pockets’ and heightened volatility to remain high.

Investors Continue to Lean In*

Investors aren’t shy about utilizing leverage to play stocks. The last time they used this much margin to buy equities, things took a turn for the worse: 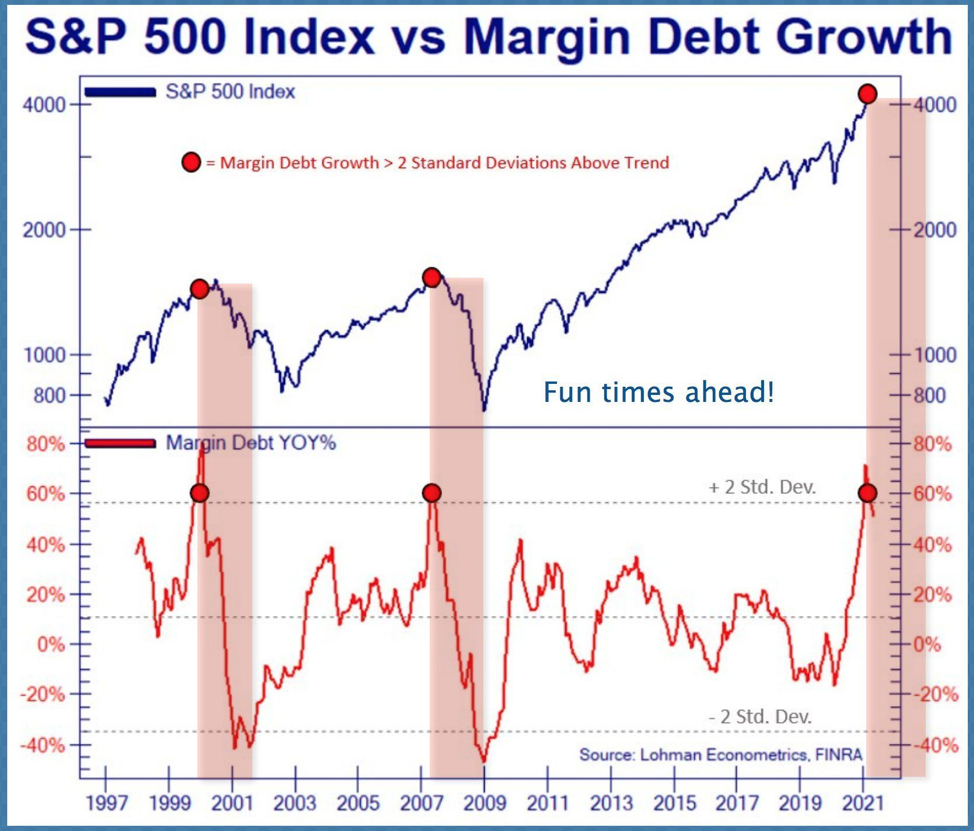 The inflation ‘threat’ isn’t going away in the near-term, and there are very smart people on both sides of the argument – some believe inflation is a major threat, while others believe it is going to pass and is ‘transitory’. Today’s situation may rhyme with the nightmare we saw in the 70’s and early 80’s. Back then, Fed Chairman Arthur Burns ignored warnings of inflation when he was chairman of the Fed in 1970 (appointed by Nixon). At that time, he essentially assumed that the various components of inflation were transitory, and by the time he left office, inflation was moving north of 10%.

Is it different this time? Today, Fed Chairman Jerome Powell sees things in a similar fashion. We are seeing inflation thru 5% now, so where does it go from here? In the 70’s, Burns interpreted rising energy, fertilizer and food prices as being caused by an El Niño, and essentially ignored everything else, including rising housing prices. He argued that this was all ‘transitory’.

Today, Powell sees inflation being largely caused by COVID-induced supply shocks, and is ‘transitory’. But, wages are sticky, house prices continue to rise as the Fed purchased ~$40 billion a month of mortgage-backed securities keeping mortgage rates low, semiconductor experts expect a shortfall for at least two more years, and the list goes on.

However, there are arguments against inflation, including a massive unemployed workforce, higher tax rates on the horizon and ageing demographics, to name a few. I wrote more on this topic last month here.

Either way, make no mistake, the central banks continue to pump liquidity into the system and keep rates near zero, with little concern on the inflation front. They believe the economy is still fragile, and that changing policy today is very risky. 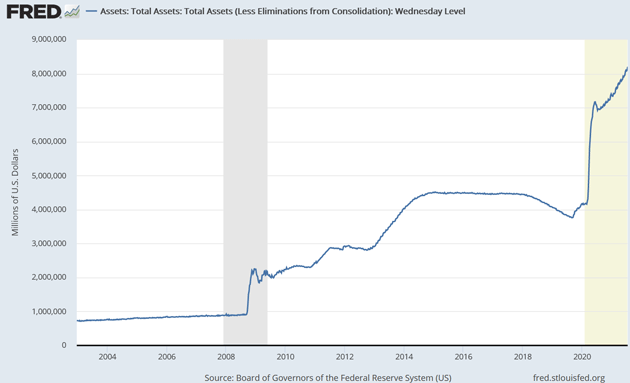 The practical net result for us is the Fed is still 1) allowing inflation to run hot, and 2) actively seeking to foster higher longer-term inflation. Both of those policies are generally tailwinds on equities. But one thing we know with conviction is that the potential for market volatility and ‘headline risk’ when the Fed starts leaning into inflation and/or decides to normalize policy is high. Choose your investments and investment professionals wisely with this in mind.

Covid’s Delta Variant – How Much of a Risk to Markets?*

While every COVID-19 death is a human tragedy, the market is more mercenary and only focuses on the economic and growth outlook. So what are the risks here?

I’ve written a lot recently on the media’s poor reporting on many fronts, including Covid. The threat of the Delta variant for markets and the economy may well be more ‘bark’ than ‘bite’, and here’s why.

Apple’s  tracking  of  mobility  in  selected  American  cities shows that activity  is  not rolling over. And From  a global  perspective,  the  Goldman  Effective  Lockdown  Index  shows  that  the  Delta  variant  hasn’t slowed progress  in  re-opening. In India, where Delta first identified, ~80% of cases were asymptomatic. mRNA vaccines (Pfizer/Moderna) still provide >88% protection against Delta hospitalization, so while infections may run, the ultimate effects on the population and mobility remain rather subdued. Almost 70% of American adults are vaccinated (60% fully).

Ultimately, markets care less and less about issues as they mature as the world becomes more conditioned to the risk. Remember the terrorist attacks on 9/11 – they obviously had an enormous impact on the markets. For the next few years, anytime a firecracker went off or suspicious package was found anywhere in the world, a bomb threat was called in, it set off convulsions in the financial markets. Then, with the Madrid bombings in 2004, and the London bombings in 2005, the impact on the financial markets became more and more attenuated until the market simply stopped caring. The markets actually closed up on the day of the London bombings.

You’ve likely seen all the noise around China clamping down on a number of sectors and companies as of late, and the markets aren’t pleased about it. This is a potential risk to global equities, and they’ve been struggling with this prospect in recent weeks.

2015 highlights an interesting illustration of this potential risk. Chinese equities started a massive run in mid-2014 and ended in one of the biggest crashes ever in 2015. The local market, the CSI300, fell by ~45% in a few months. During the first phase of the selloff, it was considered a local Chinese stock market bubble phenomenon. But 2 months later, the global markets started to care and developed markets puked as the second phase of that Chinese equity sell off resumed.

Then it went global.

We have seen many local problems eventually feed over into more global issues. Some of you may recall the Asian financial crisis that started in 1997? It didn’t matter to markets, until it did. That one it started with the Thai baht, and spread to other Asian countries. At first it was a local Thai issue, then an Asian issue, until it actually spread to become a more global issue, resulting in volatility exploding higher. What Else Could Go Wrong?*

You will always find some very notable and respectable pundits that are calling for the next crash. And there are certainly risks, so we need to monitor all that we can on this front.

From a “What can go wrong?” standpoint, clearly inflation that surges and pulls Fed tightening forward is a risk. But that won’t happen overnight. First, inflation will have to prove sticky, and growth will have to accelerate for months, and while that’s happening it will benefit cyclicals and value first and send yields higher. Only after that occurs would fears of Fed tightening hit stocks, and even in the most aggressive inflation scenario, that’s likely still quarters away from right now (and as such, not a risk to the broad markets quite yet).

The prospect of corporate tax increases in the US is a potential issue, and regardless of what happens with the negotiations, tax rates will rise it appears. Research analysts have not adjusted their earnings estimates because it’s almost impossible to do without knowing the details of the legislation.

Finally, yet another debt ceiling drama is looming in Washington. The Congressional Budget Office published a report last week which estimates that the Treasury would run out of cash in October or November. While the consensus expectation is the Treasury would not be forced to default on its debt, the political jockeying is already starting and could unsettle markets in the coming months.