It’s July 1st, and we need to address the state of the nation. A simple response might be to say, "Let's cancel Canada Day." However, this could be a missed opportunity to work towards much needed healing for all.

It’s July 1st, and we need to address the state of the nation. A simple response might be to say, "Let's cancel Canada Day." However, this could be a missed opportunity to work towards much needed healing for all. There is an opportunity to shift Canada Day from a celebration of conquest to a day of reflection. A reflection on what happened to the 215, the 751, and likely more to come. A reflection on the fact that before losing their lives, they had lost their language and culture through systematic and violent prohibition. If you would like to learn how you can support and learn more, the best resource I have come across with 7 steps of action you can take can be found here.

Let’s kick off this month’s note with a quote from the legendary Howard Marks, arguably one of the leading investment minds of our generation. We are seeing unprecedented amounts of liquidity being pumped into the system by central banks, so it’s safe to say we are in uncharted waters in many respects. This should continue to give us plenty of noise across asset classes moving forward, so I’ve been touting defense and capital preservation as the paramount concern for my clients:

“It’s more important to ensure survival under negative outcomes then it is to guarantee maximum returns under favorable ones."

One thing we’ve all learned by now is to never bet against the mighty central banks. They will eventually let up, but that’s not the near-term plan. 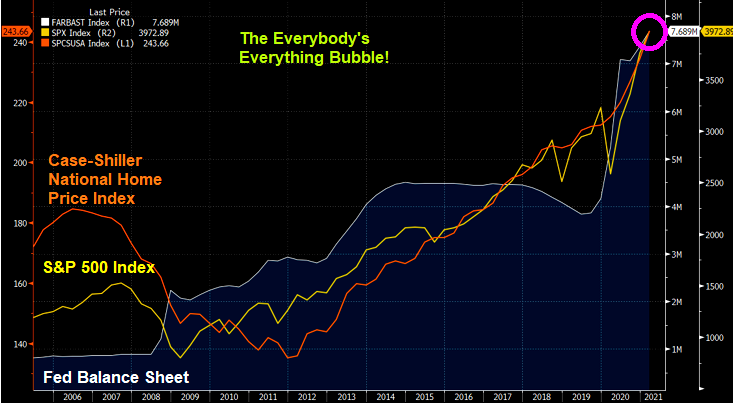 The US central bank (the Fed) has purchased unfathomable amounts of financial assets in recent years, and some $900mm worth every hour over the past 15 months. If you throw money at a problem, the problem usually ends up asking for more money, for better or worse. Which is why the US government has:

Now it’s looking to approve a new infrastructure stimulus bill that could cost $4-$6 trillion. You likely are wondering "where did the government get that money?" which is a great question. Well, much of it is at the printing press, because 30% of US dollars were printed in the last 16 months. That’s the uptick you see in this chart on the right:

The US government printed more money in one month last year than it did in the first 200 years of the country’s existence. It gave people $391 billion in “no-strings money” with a mandate to spend it as soon as possible... on the very items it had just halted production on. So, when a whack of money is chasing the same goods, you get…

Inflation – Is it Going to Go Away or Is It Here to Stay?*

Today we have ~5% inflation, which is a 13-year high not seen since 2008. We have some pundits saying it won’t stop there, and could go much higher. Others, including the Fed itself, claim it’s transitory and will subside in the coming quarters.

Not to scare you, but Wharton professor Jeremy Siegel recently said “we could easily have 20% inflation” in the next two to three years. But I know of a lot of very respectable finance minds who agree with the Fed and think things will subside on this front, or that we may even see deflation! (more on that below)

You can’t predict, but you can prepare.

If things do get ugly on this front, many folks could lose a lot of their wealth as the dollar's purchasing power drops: 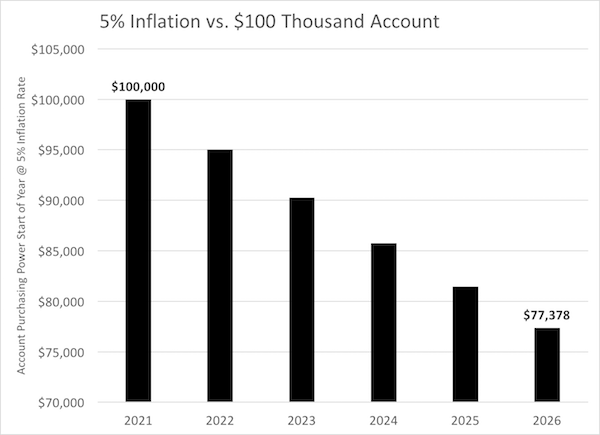 Some things are sticky and may not reset, like wages. Today, the guy or girl on enhanced unemployment benefits is making over $20 an hour. Why would they return to their old job for less than that? Employers are learning this the hard way now - the economy is reopening, but no one is rushing to fill their old positions. Look at truckers for example, there’s still a shortage. A few of years ago, their median annual pay was around $40,000. Now companies are offering $70,000+. If you start paying people $25 to $30 an hour for a job that used to pay them $10 to $15, that is not going back down, and is likely the new base wage.

We all pay for this – in higher prices.

So, if it turns out that the government can unleash more than $6 trillion in immediate stimulus on an economy in less than a year and the central bank can peg rates to 0%, the US dollar can fall more than 10% in a year and the labour market can have twice as many job openings as unemployed people, and none of this causes sustainable inflation, then we will need to redefine what inflation is – or throw out every macroeconomic textbook in existence and start over. Or maybe this will happen, and markets cruise higher without a bump. But I am skeptical. A “strong growth/higher inflation” market remains much more likely than a “slow growth/low inflation” driven market.

Is there Deflation Risk? Really?*

Some smart folks think so. Love him or not, famed economist David Rosenberg makes a similar argument to popular growth investor Cathie Wood, and they echo the U.S. Federal Reserve and the Bank of Canada, which have insisted that this surge of inflation, though admittedly bigger than they had anticipated, will not last. They all point to the still-massive numbers of workers who remain unemployed because of the pandemic, which is far from over, and say that all that spare labour capacity will weigh on wage costs and consumer demand as the reopening phase matures, keeping downward pressure on prices. The central banks’ view may now be getting some support from the bond markets, which are usually seen as the smart money. Yields generally remain subdued in the US, Canada and Europe, even as U.S. CPI numbers have shocked and inflation chatter has continued to rise.

Even if we don’t see outright deflation, there’s an argument for inflation to remain subdued. Pandemic-related inflationary surges have historically been benign. A study from Goldman Sachs Global Macro Research found that inflation rises much more during wars than pandemics. Though we must be cautious of drawing lessons from events that occurred in the long-distant past and in very different circumstances, what is clear is that history provides no evidence that higher inflation or higher bond yields are a natural consequence of major pandemics: 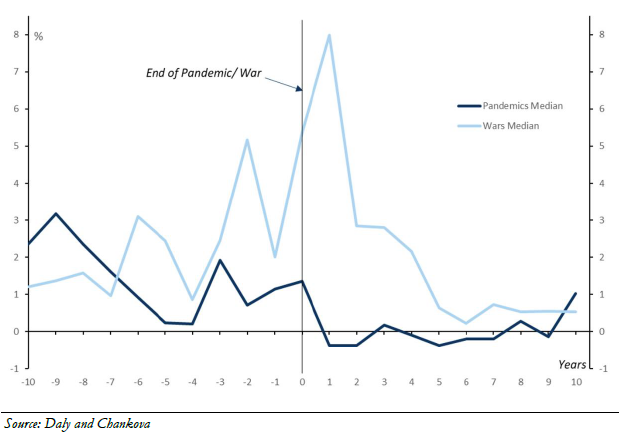 OK Then, So Where Do Markets Go From Here?*

In my role, I spend a lot of time having conversations with clients and prospects about where the market is headed longer-term given current valuation levels and the many worries that abound. My position remains as it has over the last year – there are risks, but we remain generally supportive of equities longer-term (bonds not as much, but I’ve been yelling from the rooftops on that one for some time). We must position for the risks and have navigated them very well to date, and we endeavour to continue to do so.

Goldman Sachs summarizes the generally positive equity outlook well: "US GDP growth should run well above trend through 2022... and, our revised Fed outlook still only brings one rate hike from here to the end of 2023 (nearly 750 days from now, and it’s only 50% chance they hike at all before 2024). In a world that offers very little risk premia in other asset classes, one could argue that’s decent calculus for the equity bulls. Yes, it’s highly likely the best days are behind us for this market cycle (how else can we duplicate the collapse in real rates or the expansion of the multiple enjoyed heretofore). That said, I don’t want to confuse a lower return environment for a bear market. The growth profile should still be decent and policy should be sufficiently supportive that you can still be long equities…”

The foundation for this bull market could even be strengthening from here. Here are some high level reasons why:

This is a Market of Stocks, Not a Stock Market*

My message remains clear in that this is a market of stocks, not a stock market. This means that, after years of being able to garner solid returns from simply owning the large benchmark indices, we now need to navigate individual stocks in order to outperform. We are seeing gyrations under the surface, and a series of short-term rotations of leadership, while the overall index flat-lines. Sector positioning and allocations will remain the way to outperform, as it’s been throughout 2021. Valuations may not be cheap, but strong earnings should help to maintain the balance – for now. We need to keep a close eye on yields and inflation.

It should not shock anyone if a decline causes a ~10% pullback (something we and others have touted as a looming risk). But, bottom line is that the main supportive pillars remain largely in place: the Fed isn’t reducing accommodation until at least the end of the year, with quantitative easing ongoing well into 2022, infrastructure spending is gaining momentum in Washington, the pandemic continues to recede globally and the recovery is very strong. So, if and when we see a pullback, it should prove to be an opportunity to add exposure.

We may be looking at a noisy and lower return environment moving forward, but don’t confuse that with a bear market. The chart below demonstrates that as forward S&P 500 P/E ratios approach current levels, subsequent 10-year returns are lower. I believe that this will put the onus on investors seeking solid performance to adopt an active investment style, something I’ve been touting for months: 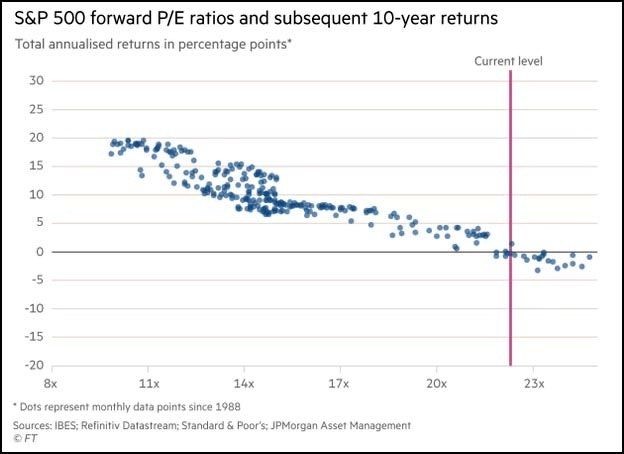 So, as we head into the second half of the year, expect price choppiness and upticks in volatility to be common as investors digest the implications of an EPS-driven environment and noise surrounding inflation, the Fed, ‘peak growth’, and taxes which will all continue to pose various headline risks. 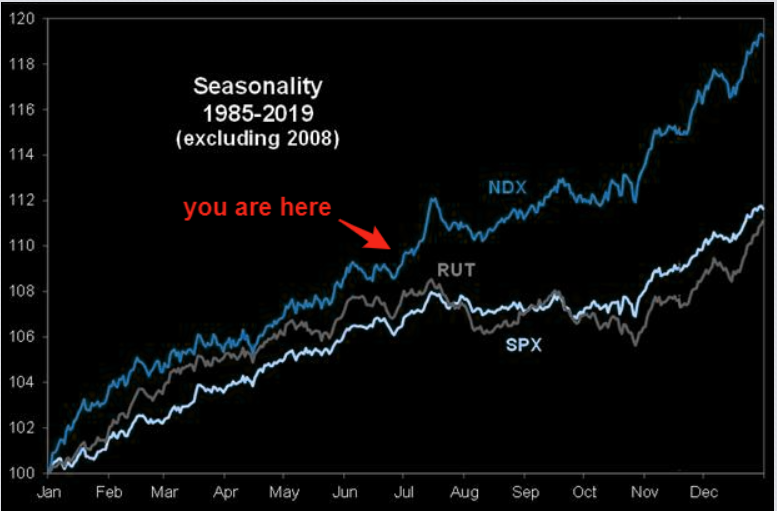 Given my institutional network, I see a number of private deals (pre-ipo) and early stage companies. Some of these are interesting, and I share them with my network. This stuff certainly goes in the high risk bucket as a rule. If you want to be added to my distribution list for these, simply let me know.