Let’s kick off this month’s note with a quote from the legendary father of value investing, Benjamin Graham. Given the FOMO-driven speculative behaviour we’ve been seeing in recent months from many, I find it particularly prescient to put things from the investment world into perspective:

“To see why temporarily high returns don’t prove anything, imagine that two places are 130 miles apart. If I observed the 65 mph speed limit, I can drive that distance in two hours. But if I drive 130 mph, I can get there in one hour. If I try this and survive, am I “right”? Should you be tempted to try it, too, because you hear me bragging that it “worked?” Flashy gimmicks for beating the market are much the same: in short streaks, so as long as your luck holds out, they work. Over time, they will get you killed.” - Benjamin Graham, The Intelligent Investor

Let’s Start with the Potential Bad News: What are the Risks to the Market Outlook Today?

With all the trillions in stimulus that governments have poured into the system, inflation and an increase in interest rates remain on everyone’s mind – this is making the market nervous.

Who lends large amounts of money at interest rates below the level of inflation in the face of a potential inflationary cycle? Very few institutions would, but the government does. And the only sizeable buyers of all this debt from the government’s stimulus are the Central Banks themselves (the Bank of Japan now buys ~80% of all Japanese sovereign debt, and the Federal Reserve bought ~54% of the bonds the US Government sold this year). This in turn drives inflation.

Inflation raises input costs for companies. This leads to compressed margins and lower profits in the near term. And you can guess what happens to stocks that are priced for perfection when profits don’t keep up…

Is inflation temporary or here to stay? The Fed strongly believes it is temporary, or ‘transitory’ as they like to say. But the market is fearful: 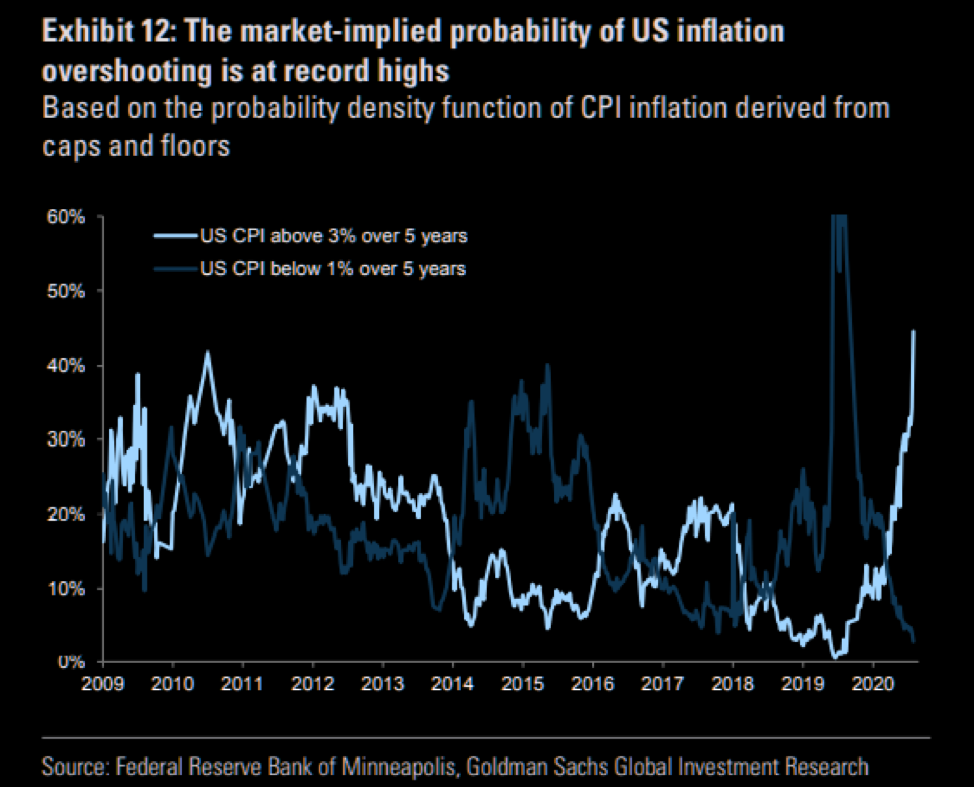 A continued increase in interest rates could follow suit and continue their march higher, and this could cause pain as well. Though interest rates are highly unpredictable, not unlike equity markets, the factors influencing rates are looking supportive of this trend:

The chart below shows the 'real' rate of interest on U.S. long-term debt. My friend and former colleague in the institutional business Bob Decker astutely notes that “it won't stay down forever. Despite promise after promise, the Fed will at some point have to face the reality that the costs of excessive monetary support of the economy will outweigh the benefits. We are not there yet, but every data release that exceeds expectations brings us closer.” 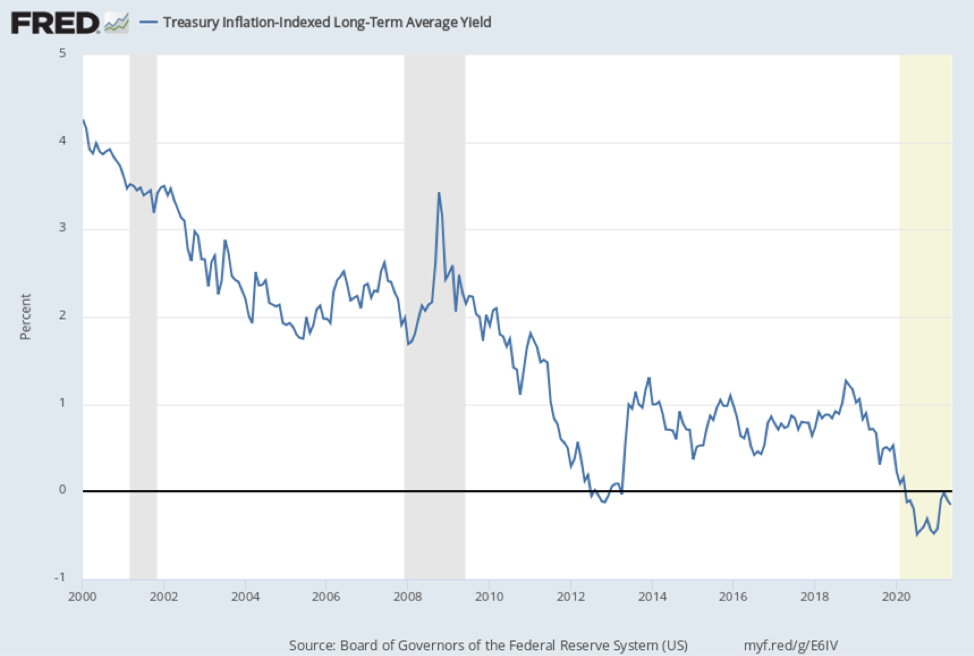 Sustained inflation and an economy that is running “hot” essentially flips the script on the Fed and investors, at least the script that’s worked for the past 20+ years. What I mean by this is that since the late 1990s, investors have been conditioned that whenever there is any economic or market trouble, the Fed rides in and essentially ‘saves the day’ via interest rate cuts and/or stimulus. The result has been the same: the economy and markets get in trouble, the Fed cuts rates and stimulates, and stocks eventually set new highs.

So, the Fed consistently ‘riding to the rescue’ allows the market to look past near-term economic pain and move higher. This was especially evident exiting the 2008 financial crisis, as the stock market rallied consistently despite the actual economy taking a long time to recover, and again last year when stocks aggressively rallied despite a raging pandemic and partially shut down economy.

Remember, markets don’t care about what’s right now, they care about what’s next, and the Fed cutting rates and instituting stimulus measures reassured the markets that brighter days were ahead—and that’s why stocks have quickly recovered from any economic setback during the last 20 years.

But the reason sustained inflation and an economic overheat is so scary is because, in that paradigm, what has saved the markets for the past 20 years will only make the problem worse, and make stocks and bonds BOTH fall, and likely pretty hard. In this scenario, the Fed can’t simply hint at rate cuts and endless stimulus to fix the problem since those are the policies that would be causing the problem, and doing more of them will only make the problem (inflation) and market reaction (declines) worse. Instead, in this scenario, the only policy the Fed can employ to actually fix the underlying problem is to hike rates. This reality was made famous by then Fed Chair Volker raising rates throughout the late 70s and early 80s, culminating in a double-dip recession in ’81/’82.

As anyone around back then can attest, that situation was painful, but that would likely pale in comparison to now given there’s massive bond and fixed income ownership due to aging Baby Boomers.

So, let’s hope that the Fed is right and inflation is ‘transitory’ here. Sadly, there’s not been a Fed in history that thought it was willingly creating an inflation problem. These people are very smart and experienced, but, like the rest of us, they aren’t perfect.**

But Is There A Chance That the Market Melts Up from Here? Or Even Explode Higher?

Contrary to what the media and negative pundits will always convince you (ahem: negative…), there is a real possibility of that chance. Analysts that project earnings have been consistently behind the eight-ball and are still playing catch-up as companies recover earnings more quickly than expect.

And, there remains the potential for "explosive upside" as institutional cash on the sidelines keeps growing. Institutional investors are still raising cash at a furious pace:

Investors are getting cautious and raising cash, even as equity markets are pushing higher. Volatility is dropping, not rising. And, "shorts" on Russell 2000 futures were the highest since the pandemic started.

This isn’t usually the stuff of market tops – this is potential fuel for a further market melt-up. 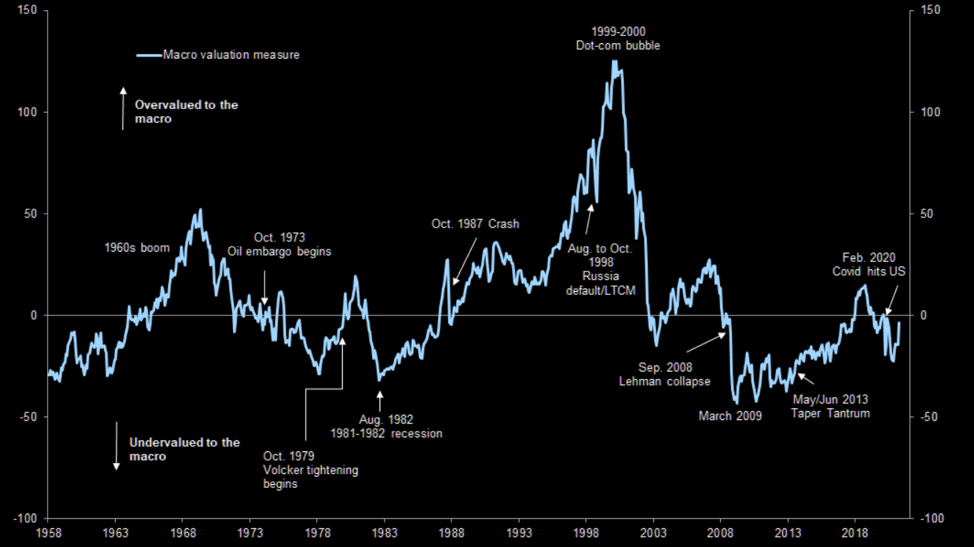 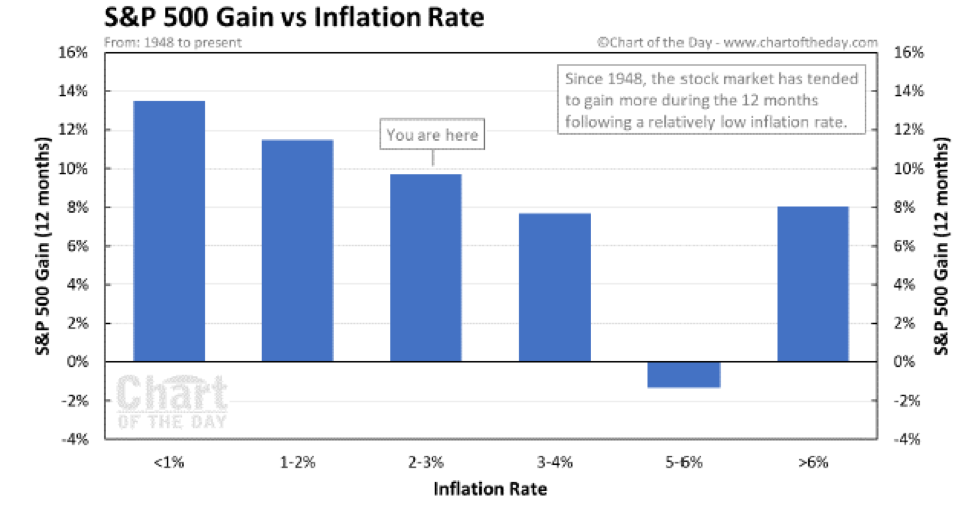 Source: chart of the day**

So Where Do We Go From Here?

Many have been puzzled that the world’s stock markets haven’t collapsed in the face of the COVID-19 pandemic and the economic downturn it has wrought. If you thought that you have missed all the gains in the market and it’s all downside risk from here, you should likely reconsider that stance. Many are still very fearful, and the markets will remain volatile, but supportive forces remain in place. And with interest rates low and likely to stay low-ish, equities will continue to look attractive, particularly when compared to bonds.

General inflation and rate fears remain a headwind on stocks, and they will be until it becomes clear that inflation is a temporary phenomenon. Similarly, the Fed will transition to tapering the stimulus, and how that transition is communicated and handled will factor significantly into the market’s near-term direction from here.

The markets are transitioning to a new paradigm where there isn’t a positive ‘catalyst’ to drive equities higher every few months, so upside from here is likely to be lower and slower. As well, some stimulus from the authorities around the world will be slowly removed, and this process will be noisy, likely causing more volatility like we’ve seen recently.

These are all legitimate concerns, and the road will be bumpy, the fact remains that there are powerfully supportive forces for stocks still in play at this point. The economy is roaring, corporate earnings are breaking records, consumers’ personal balance sheets are very strong (unlike most recoveries which makes this almost like a “post war” recovery), while the Fed is keeping rates low for years into the future and likely won’t reduce stimulus in the form of quantitative easing until very late in 2021 or 2022.

And as long as these fundamentally positive supports for stocks are in place, and we do not have evidence that implies the Fed is getting behind the curve on inflation, or is about to make a policy mistake (tapering too soon, or not soon enough) and the COVID recovery doesn’t go off the rails, then the risk of a major decline in stocks remains generally low.*

Do You Really Want to Invest Now?

While the broader outlook generally remains supportive, you may have a hard time making money investing in broad indexes. This recent rally has masked significant factor volatility, which in turn has driven rising ‘dispersion’ between the returns generated by different investment styles. This means that as indexes churn and may go nowhere, the stocks within it are moving. So you need to partner with an advisor that works with the best-in-class asset managers that can help you navigate this environment and perform well.

If you still aren’t convinced, remember, you’re in this for the long-term:

Equities cannot be consistently timed, not unlike the economy. To realize the full permanent return means that you have to hold them through the noise and temporary declines. And a well-constructed portfolio won’t garner the full downside capture of the benchmarks – this is why I talk so much about integrating the use of alternative investments you’re your portfolio. If you’re not already, you likely want to get invested (at least in part) sooner than later. It’s about the long game.