In life and in markets, moments of decision make huge changes to the future trajectory of where things end up. Sometimes we know for sure it is a huge decision. Sometimes it seems trivial at the time and becomes huge. You just never really know.

One of my favourite stories outlining an obvious huge decision is about Hall of Fame pitcher, Tom Glavine. Every baseball fan can recall Tom pitching in the playoffs for the Atlanta Braves. What few realize is just how close he came to an NHL hockey career instead.

Below is a short summary of what happened. If you wish to read the entire article click here.

Tom Glavine knows exactly where he would be if he chose hockey over baseball. The Hockey Hall of Fame.

"I got drafted ahead of [Luc] Robitaille and Brett Hull and those guys are in the Hall of Fame, so clearly I would have been a Hall of Fame hockey player, but I say that 100% kidding," the two-time NL Cy Young winner clarified with a laugh.

In June 1984, just four days after being selected by the Atlanta Braves in the second round of the Major League Baseball draft, Glavine was taken 69th overall by the Kings in the NHL Entry Draft. Glavine, who had scored 44 goals and 85 points in 23 games in his final season of high school hockey, went 102 spots ahead of Robitaille.

Tom had a choice to make. It was very clear what was on the line in this case. The direction of his entire life was going to be determined by his choice.

But many times the choices, or potential ramifications of the choice, are not so clearly defined.

When I was 23 years old I went to see the 1987 movie Wall Street. The movie glorified the raw excitement surrounding financial markets. I left that movie theatre questioning whether I really wanted to go to law school or maybe consider learning more about a career in the financial industry.

Central banks around the world have become the markets.

When we see our Prime Minister announce one money spending initiative after another, it is all made possible by the Bank of Canada.

Tax revenue and deficit spending via traditional bond offerings, could not be possibly raise enough capital to fund this folly at the present low interest rates.

In hindsight, that was the safety buffer that actually kept politicians in check. If there were not enough takers to buy your debt at a reasonable interest rate to fund your project…you didn’t spend the money and do the project.

It was the same for people, companies, and governments when they were dependent upon the capital markets for funding.

The same process has taken control in every other country in the world too.

Hey, this is not news to anyone…at least anyone who reads my blog. But here is what I find truly startling about today: There is no longer a pathway back to what we once called normal.

The COVID-19 global central bank responses were the bridge too far in finding a way back. John Mauldin, in his weekly letter years ago, used the analogy that it was like driving a car along long stretch of desert highway not knowing where the next gas station is. You had ¾ of a tank when you passed the last service station and are down to ¼ of a tank now. You still don’t know when the next station is coming up.

The one thing you know for sure, you can’t turn around and go back to the last station you passed. It is not possible anymore. So what do you do? You keep driving!

Friends that is where the central banks are today.

So what happens when you keep driving?

Well, one of two things. You come to a gas station, fill up your car, and forget about all the stress you felt while you were driving with almost no gas. Or, you run out of gas and everything stops.

So the central banks just keep driving…so to speak…by doing larger and larger amounts of the same actions they have done since 1987, and hoping that something finally clicks economically with the results.

As with any repeated process that is used to hold back a wave of undesired results, central bank actions suffer from the law of diminishing returns.

The next step for central banks to employ will be Yield Curve Controls (YCC). Simply, the central bank states a level of interest rate that it deems acceptable to meet its objectives and prints enough money to buy bonds to control the interest rate.

The bond market is already getting a little nervous about the amount of money printing that is going to take place no matter who wins the election (note the move higher on the US 10 year Treasury bond below. It is now almost back to the blue 200 day moving average yield). 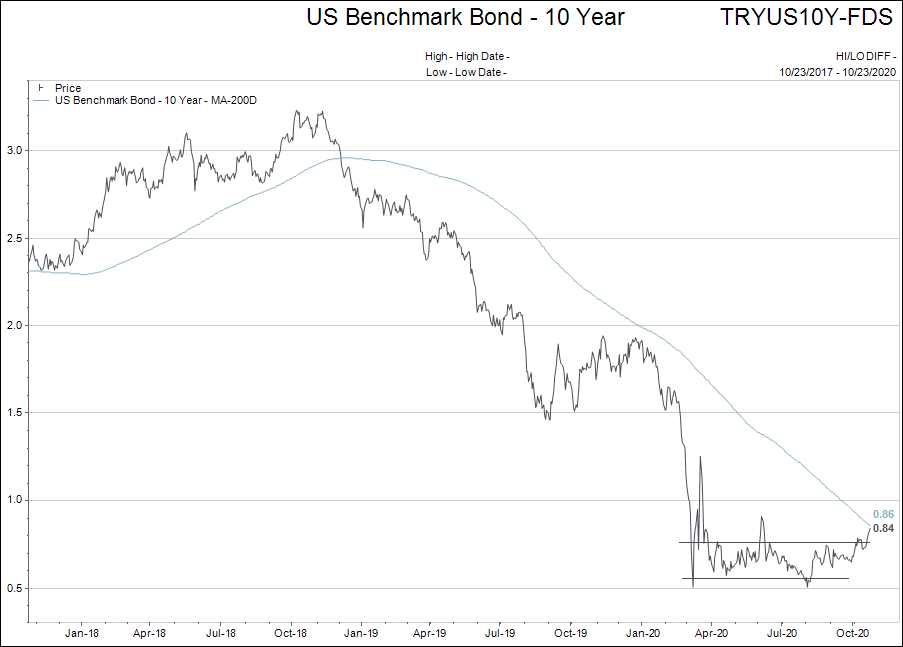 My belief would be a yield of 1.25% on this chart would stir the US Federal Reserve to implement the yield curve controls they alluded to in the June 10, 2020, minutes of that meeting.

Large and small decisions over a long period of time by the Fed and other central banks led the world to a place of economic “no turning back.”

This is the reality we move forward with in coming years.

I am sticking with my Megaphone Pattern forecast. Actually I have seen two other editorials using the same technical formation now. Interesting… 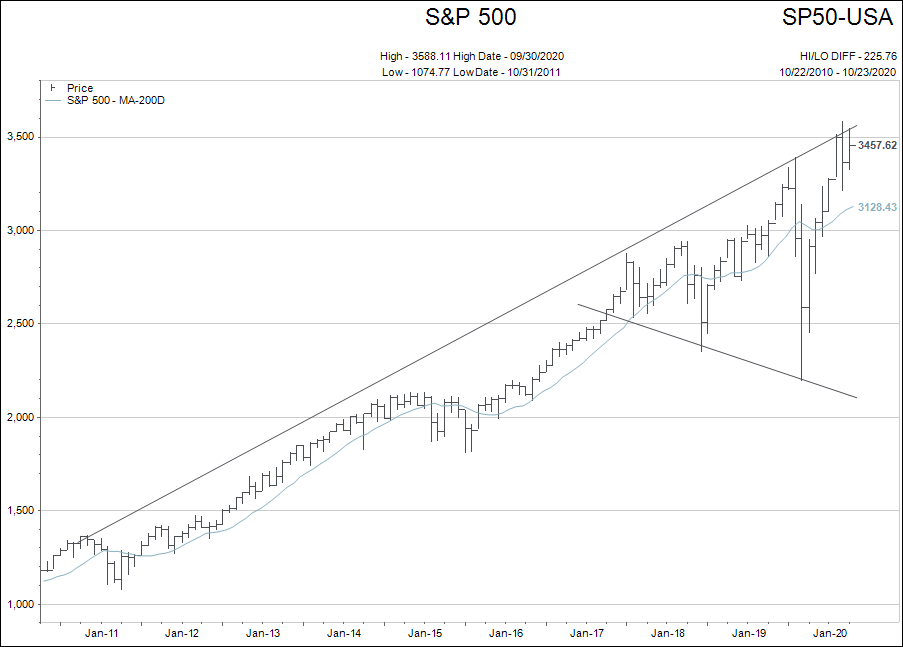 We look forward to the announcement of the US stimulus package over coming days and weeks, as well as the US election results.

Have a nice weekend. 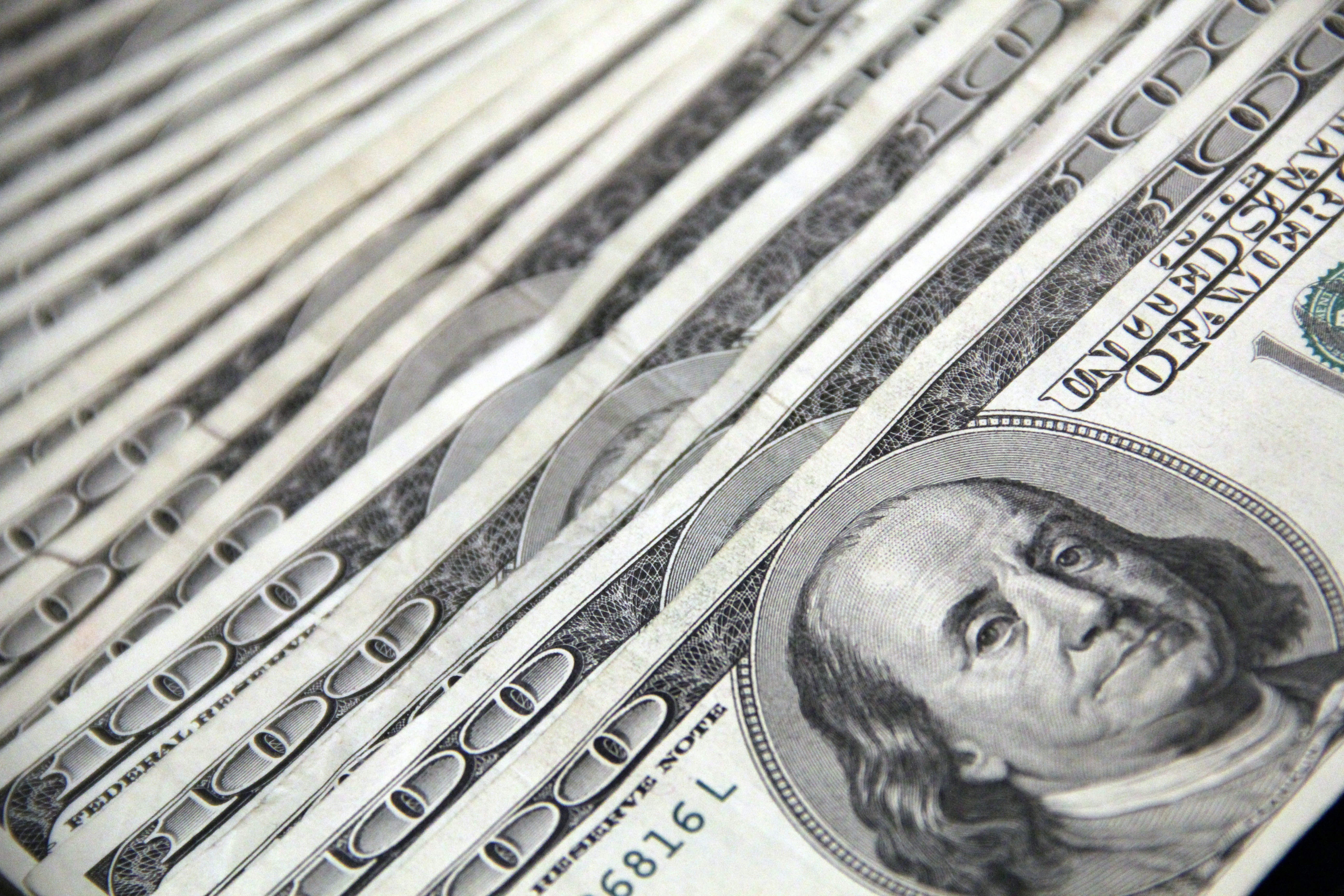 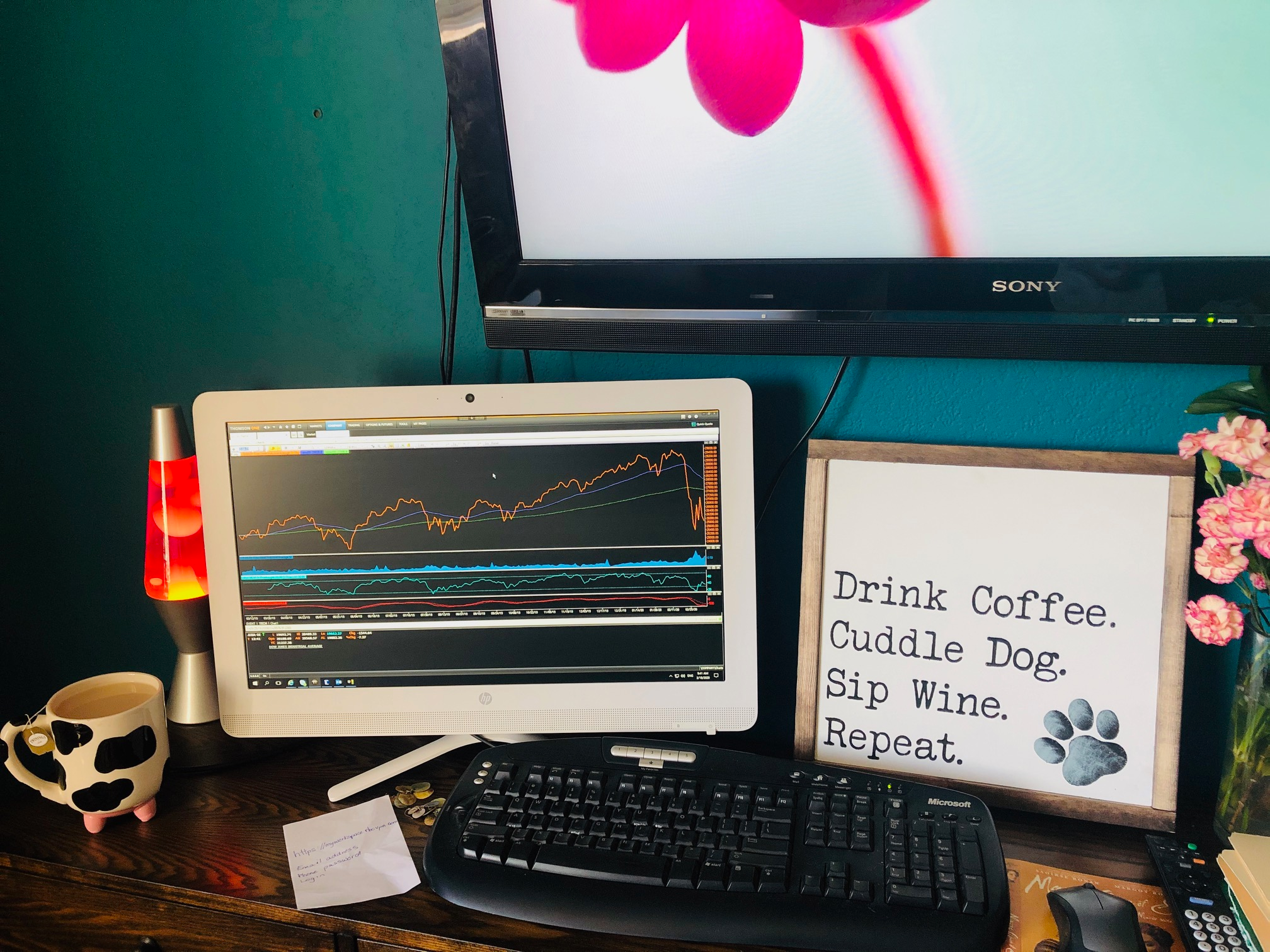 My goal would be to maintain a hybrid of both office and working from home going forward.