The world is being divided and sides are taken as algorithms compete for your attention.

The docudrama “Social Dilemma,” on Netflix is an executive summary type look at how social media has impacted our world in a negative way.

If you have not watched the hour-and-a-half long film, I highly recommend it.

The reason a docudrama finds its way into my weekly comment is twofold:

One of the terms used in the film is the idea of the “attention extraction model,” employed by the free apps and large tech companies.

When you think that every click you make, and every second you spend at each click, is monitored and recorded in the Surveillance Capitalism business model, it should be no surprise that attention extraction would become the activity yardstick used to measure results.

Remember, the flow of advertising money goes to the companies that hold the most eyeballs for the longest periods of time. Hence, your eyeballs and time spent on a particular app or website are what all of tech is competing for…and they really don’t care if they mess up your life to achieve their goals.

Our data is important to these companies. But in reality, our data is pretty well disseminated over the Internet already. What is key to these companies is our metadata (metadata here is meant in context to our behaviour online and how the sum of our activities (data) gives metadata collectors a clear picture about who we are and our “preferences”).

This is where a lot of things start to go wrong in social media.

Your “preferences” are not really your own.

Preference is a quaint way to term your behaviour because it lets you believe you are in control.

But from a social media perspective, your preferences are actually formulated by algorithms using your metadata, sold to companies who further analyze your metadata choice patterns to nudge your “preferences” to align with their products, goals or objectives.

At the most basic level, that could mean a ton of advertisements for nutritional supplements after you Googled information on amino acid health supplements. At much more sinister levels, it might mean links and advertisements to things that you are predisposed to accepting or believing and that might actually be harmful to you…ideas like “all cops are corrupt,” “extremism is normal,” or “climate change is bogus.”

Once the algorithm figures out your predisposition on a topic, it will continue to feed you more information that enhances your point of view whether it is correct or not.

Why? Because the algorithm is competing for your attention.

You will click on what reinforces your opinions regardless to the validity of those opinions. We all love to be told we are right.

People tend to fall into two categories when it comes to “attention extraction.”

The first group are those that have no clue they are being manipulated. They think the Internet actually is free, and they can click on most anything they like in relative privacy.

They believe the Google results they see are actually properly vetted news, or research based upon their Google search wording. This group tends to be older in age.

The second group consists of people who know all about data collection, metadata, and how tech companies use their personal information and online habits. But they believe they are smarter than the algorithms and the tech companies. They don’t get duped into “fake news” or “false reinforcement of thoughts.”

In the extreme, this group of people believe they manipulate the manipulators. This is mostly a young age demographic.

Both of these biases are dangerous to our view of the world, and at the end of the day, our mental health.

Personally, I believe we are all manipulated by the ubiquitous infiltration of technology in our lives.

You cannot opt out.

You are in “the matrix” whether you think you are or not.

The world is being divided and sides are taken as algorithms compete for your attention. You are fed the positive message that you are right in your beliefs, by simultaneously being fed the message that “they” are wrong in their beliefs.

Political divides, wealth/income divides, racial divides, religious divides; there is no end to how our social media feed can influence how we feel about the external world around us.

And this is why I believe large tech companies are at risk of being reigned in during coming years. Governments are going to put some regulations on the way these companies manipulate your metadata and, ultimately, your thoughts and actions. The entire tech business model could be negatively impacted with such change. (see Historical Note at bottom).

In summary, if you are in an index based investment or a managed portfolio, you own lots of Facebook, Google, Apple, Amazon etc. whether you know it or not. These are the target companies that may face more scrutiny in coming years.

If the rules change to how they can monitor and use your data, their profits will change too. Something to watch for in coming months.

In terms of historical precedent, one of the facilitating factors influencing “The Panic of 1907” was Theodore Roosevelt’s “malefactors of great wealth” speech where the President warned “The complete and final danger in class hatreds is that once aroused, they have no stopping place short of exhaustion, and make no discriminations.” (Robert F. Bruner/Sean D. Carr The Panic of 1907: Lessons Learned from the Market’s Perfect Storm pg. 163).

What was causing the class hatred in the early 1900s?

Income and wealth inequality that was being exacerbated by the raging stock market that primarily benefited the wealthy.

Although the mediums that spread of “fake news” were very different in the early 1900s, the impacts on society were exactly the same.

Once the news flow of the early 1900s turned from “worshipping the robber barons” to vilifying them, government intrusion in their business models become permanent. The stock market cycle peaked and crashed, partly, due to this change.

Remember, it was the financial panic of 1907 that led to the creation of the US Federal Reserve Bank (The Fed) in 1913.

Interesting how history tends to repeat itself.

The ideas presented above are very long term in nature. None of that type of change is going to happen overnight, but investors should be thinking about this type of change and watching for it.

To finish, let’s look at a couple of charts.

Don’t look now, but the US Federal Reserve’s balance sheet is starting to rise again and is approaching all time high levels.

As mentioned numerous times in these weekly comments: the Fed’s balance sheet has correlated at a plus 90% positive correlation with the direction of the stock market.

After the election in the US I expect this balance sheet to explode higher.

Remember, Canada is the “rock star money printer” relative to its size, so the same goes for us. 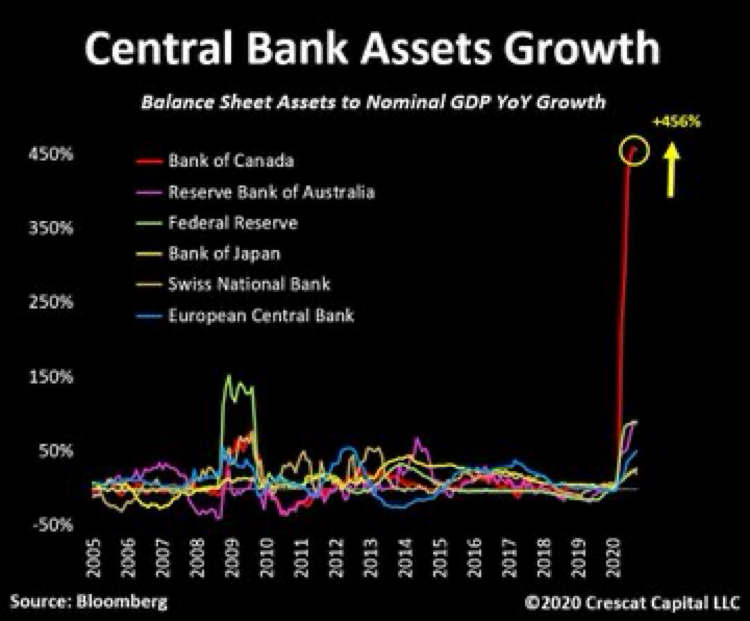 The next chart shows the number of negative yielding bonds around the world…$16.515 trillion US dollars’ worth of them. 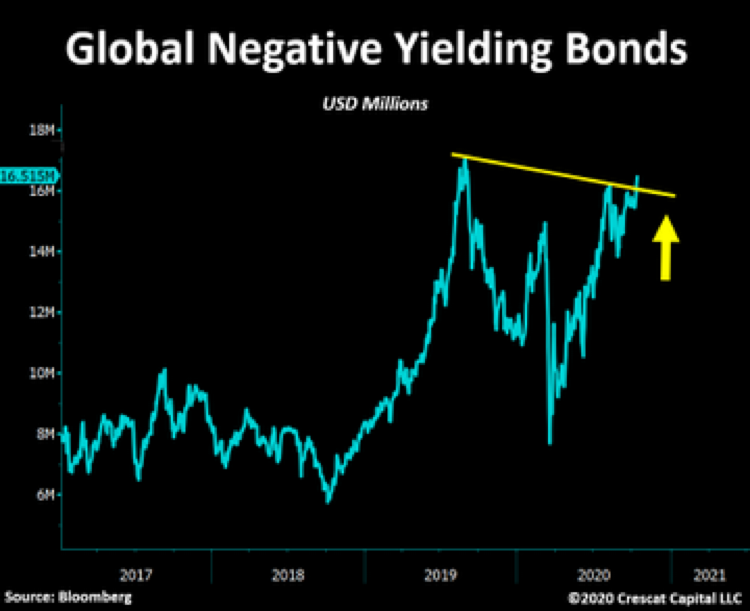 If you keep printing money as a central bank, there is no choice but to suppress interest rates. Higher rates would bring the entire Ponzi scheme down upon itself. 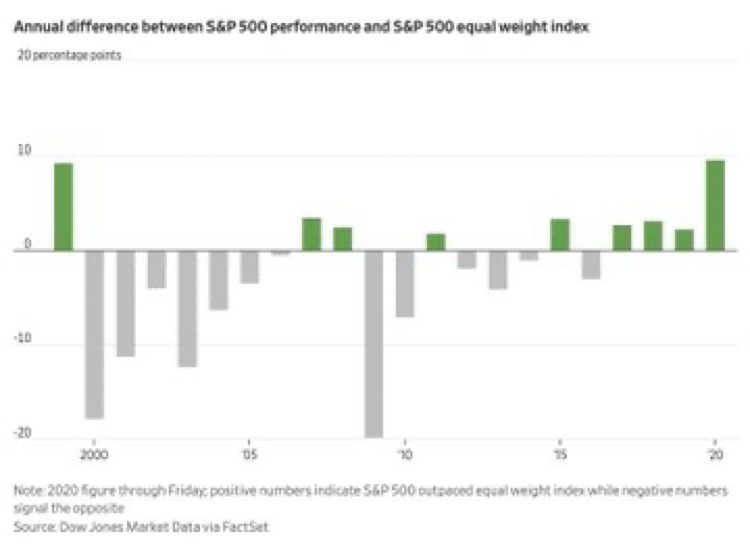 The equal weighted index gives the same amount of “price influence” to the smallest sized company in the S&P 500 as the largest company. The market capitalized index give nearly 40% of the 500 company performance weighting to the largest six technology companies.

As previously mentioned, this is why I wrote the first section of the editorial. If the government goes after large tech it could mean quick changes for the stock market indexes.

The graphic shows that at the end of cycles the market capitalized index usually outperforms the equal weight. That has been true for four years running now. Just something to keep in mind.

Have a good week and as always, please reach out with your feedback and questions.