Part one stated that “debt will never matter again.” The theme of that note was to point out that the majority of our world’s financial system is now run upon the premise that debt can expand at an infinite rate as long as interest rates are near zero.

Part three considers what investors might invest in during the good years of “inflationary recession,” before the bad years take hold.

Let’s jump right out of the gate and get into different asset classes.

Real estate has been crazy for years all over the world. For better or for worse, Canada has been the “chief crazy,” in the G7 group of nations. 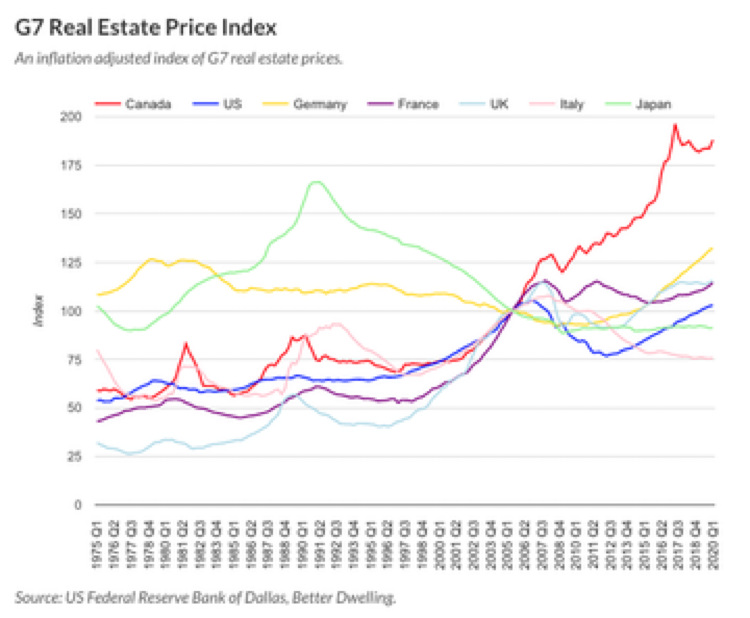 The next chart looks specifically at the local Nanaimo market. 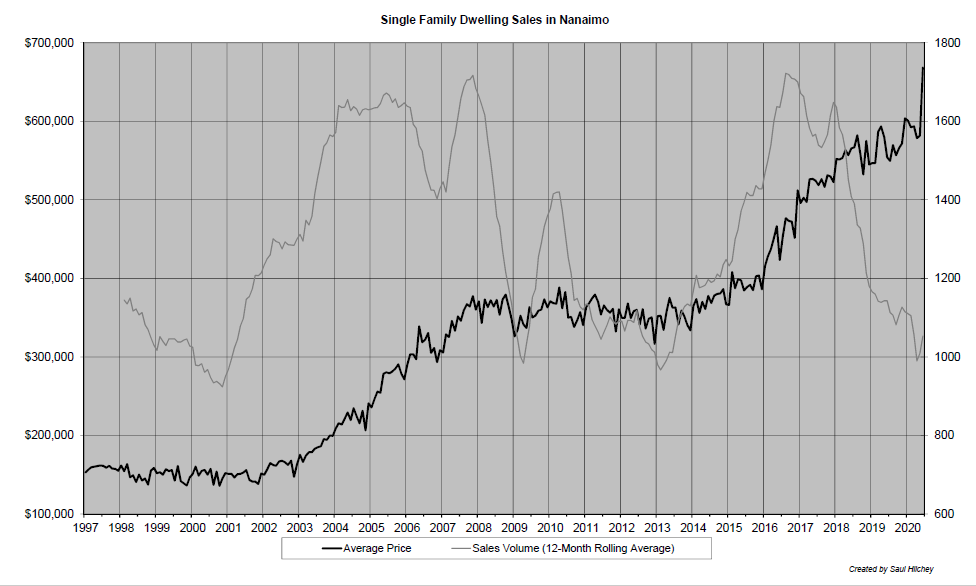 My colleague, Saul Hilchey, has been graphing Nanaimo single family home prices for years. The chart above is inclusive of July 2020.

How large is that jump you see? (From Saul’s email)

From June to July, sales volume increased month-over-month by 22 houses; from 131 to 153

Volume last July was 109, an increase of 44 houses year-over-year.”

So what caused this incredible spike? The short, obvious answers:

2. COVID trend away from condos and city center living

“What is my cash going to be worth in coming years? Should I spend money now while it is still worth spending? Hey, I better buy something right now! What’s been going up, real estate, I need to buy real estate.”

These are all the seeds of “inflationary psychology.” This is how the inflationary recession begins to fan itself into outright inflation.

If this inflation thing is really going to happen, then we would expect bond yields to begin to rise. Let’s look for some evidence.

Check out the circle at the far right of the one year chart of the US 10 year bond. 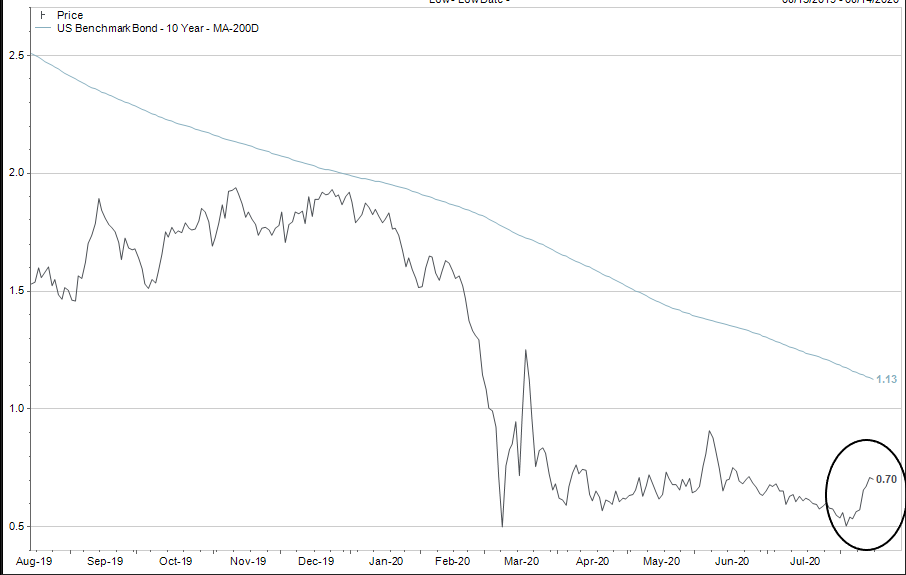 Next, we get a little more ratio minded. The next chart shows the US 2 year bond yield RELATIVE to the US 10 year yield.

We will keep a close eye on these two charts in coming weeks.

To finish this three part series off, let me outline where investors can focus their attention.

The central banks will have to keep printing money and injecting funds into the banking system. These amounts will have to grow to suppress the upticks in the interest rate charts shown above. The graphic below reminds us that those at the top benefit most from QE. 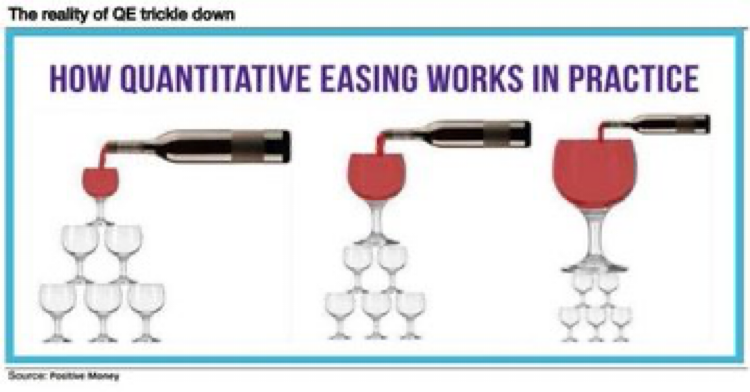 But all of us average people are getting a little love since the “COVID Crash” in March 2020. Money has to continue to be “helicoptered” to “Main Street,” as well as the banking system. By depositing cheques in bank accounts, the inflationary recession is aided and abetted.

The following graphic shows real disposable personal income growth in the past eight recessions; notice anything strange this time around?

Together, the QE and Helicopter Money highlight the backbone of the “good years” of the inflationary recession.

Real Estate – Specific types of real estate will be sought after during the “good years” of the inflationary recession. I expect our government to extend the programs of mortgage deferrals, rent deferrals, free money and access to financial support. Single family housing away from large centers with “a little bit of land” will stay hot; condos and highly urbanized homes will be fine but not nearly as sought after.

Stocks – Similar to real estate, companies that are angled towards the trends of the post-COVID world will remain bid. So will companies that pay solid dividends. The general stock market will be fine but not nearly as robust.

Gold, Silver, Bitcoin – During the good inflationary recession years these asset classes should remain strong. Expect much larger price swings in them than in the past. This means keep your investment sizing right for you where you won’t panic on the 5% - 10% down days so you can stick around to enjoy the 3% - 5% up days.

Base Metals – Not likely to be as exciting as some of the other areas above but will perform well during inflation.

Special Situations – There are emerging themes that are likely to be quite disruptive during the good inflationary recession years. Watch for these ideas and don’t be afraid to invest a little bit of money in them when you think you see one.

The financial world changed due to the central bank and government response to the COVID crisis. Nobody could really see it in the early moments of March and April. Many great investors (Buffett, Gundlach, Soros, Marks) missed the first few months of the recovery by waiting to see if the governments were really stupid enough to sell the remnants of their souls to saving the banking system…again.

But in the end, they were more than stupid enough!

I’m done judging…I’m finished with hoping our leaders would have a shred of common sense or concept of fairness to balance the realities of both savers and borrowers. It is not going to happen.

The central banks will enable our leaders to spend their way into the inflationary future I always envisioned…that doesn’t change. What has changed is the duration of the “deflationary recession,” I always believed would precede the inflationary one.

It just came and went in a matter of days, rather than weeks and months as I expected.

If you agree with what I have written in this series, you have to make two decisions:

Lots to think about…shoot me an email if you want to discuss anything in this comment or making any changes to your portfolio.