When will you know when it is time to not take more risk?

Last week in “Debt will never matter again” we considered two economic traits that will remain in place, as long as the “endless debt” narrative is in force.

Before we look forward, I need to take you on a trip looking back.

My personal belief has been that ever since the saving of Long Term Capital in 1998, the global central banks had set the world on a path to use copious amounts of debt to keep the asset bubble intact.

The same formula was used for the Y2K computer fear in 2000, the aftermath of September 11th, 2001, the 2008 housing bubble meltdown, and most recently the COVID global economic crisis.

Each example required orders of magnitude more money to be printed by ever expanding percentages of the world’s countries.

But up until 2020, the process had remained the same: Central bank money went out via the Treasury to chartered banks to be disseminated to worthy borrowers. In English, that meant the rich got the money, corporations got the money, and the average person got screwed.

Ultimately, that central bank playbook was always behind the curve creating more debt than actual money being spent in the economy.

As I have said many times in these writings, the definition of insanity is doing the same thing over and over again expecting a different result.

In my opinion, sooner or later, central banks repeating that mistake was going to cause a huge deflationary event where asset prices got crushed, bankruptcies would surge, and great deals would be sitting there for the taking in stocks and real estate.

March of 2020 provided the framework for exactly the type of shock I believed was going to facilitate my expected crash into a reality.

Are you still with me? Because this is where the entire narrative shifts and the future begins to look very different from what I was expecting.

The COVID inspired recession created the fastest drop on record for stock markets. This means the largest percentage drop in the shortest period of time. Long term buy and hold portfolios were destroyed in a matter of weeks. The losses would have led to a global depression.

Since the losses were centered, not only in the financial markets but the real economy too, the central banks could not pull out their old bag of tricks and print money to move through the banking system to flow through support to assets prices.

Governments started mailing out cheques to people. This is what is referred to as “helicopter money.” This is what was supposed to gradually happen when Modern Monetary Theory (MMT) was adopted by the next administration in the US.

The chart below shows how staggering the aberration in both transfer payments and wages has been. 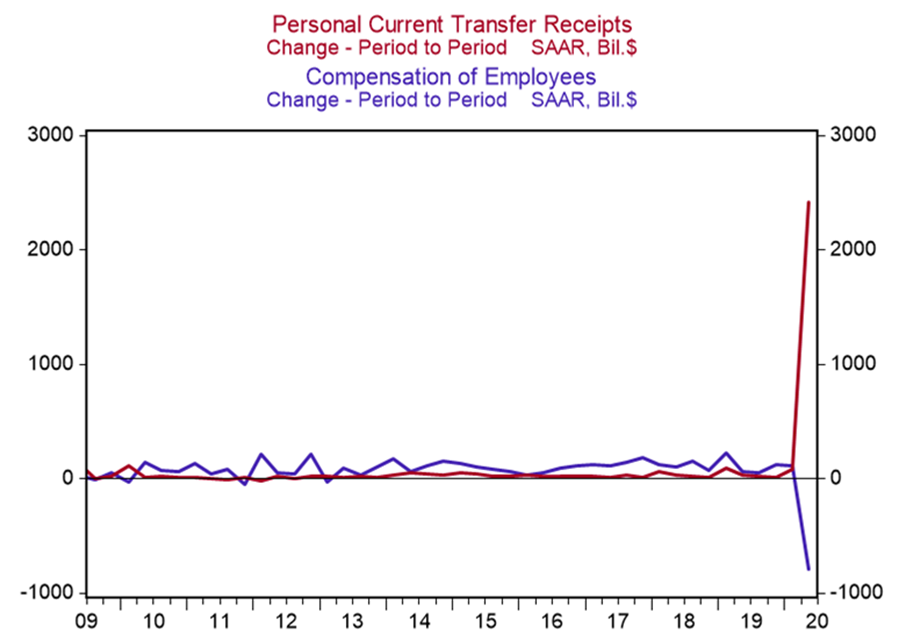 Longer term, the chart below shows how huge the cash infusion has been because it is relative to GDP. 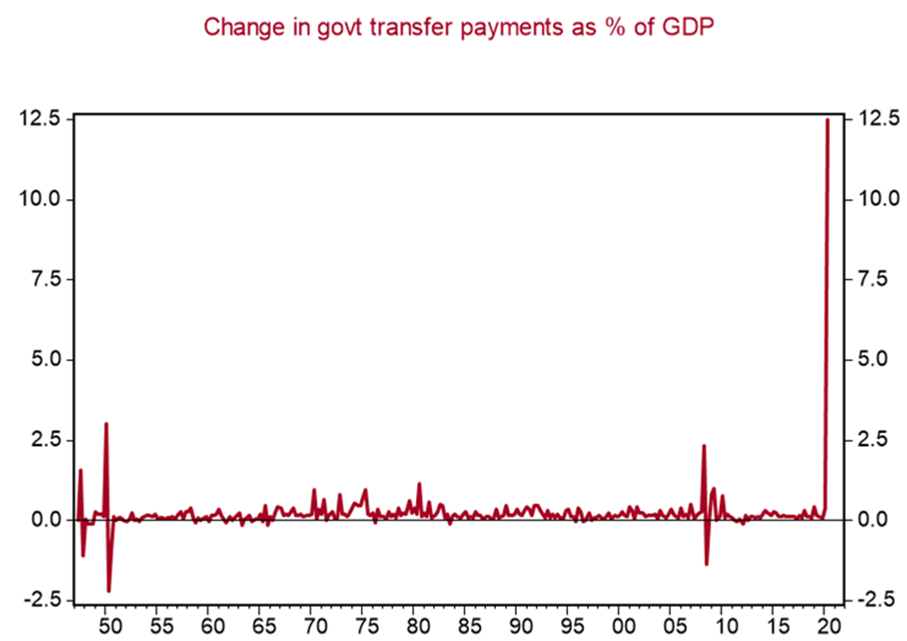 Finally, not to be left out, Canada has set a course to prove that “debt doesn’t matter anymore” as well. Again, hard to imagine seeing such a spike only a few months ago. 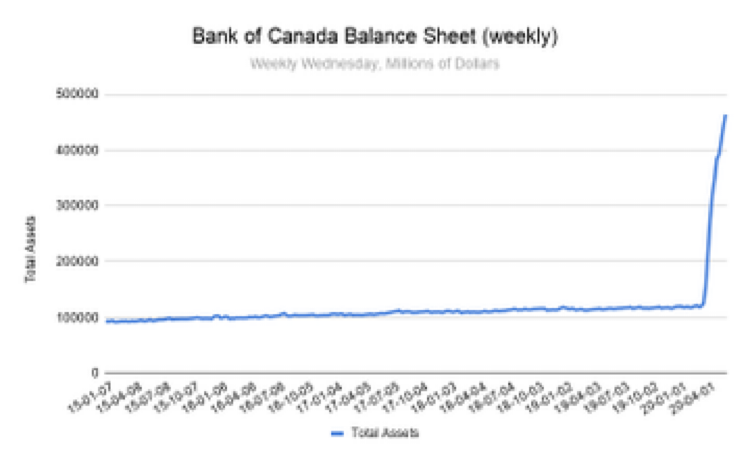 The expression says: “Never let a good crisis go to waste.” As the charts above attest to, I submit that all around the world we have the equivalent of MMT happening, and it is not going to go away anytime soon.

So, it is time to look forward to what I believe this shift in money printing policy means in terms of today.

Up until April 2020, debt was still being created faster than “money” and deflationary risks were growing exponentially. With the shift to “helicopter money” the equation has shifted the DEMAND curve away from a deflationary future to an inflationary one.

In other words, the world had it deflationary event in March 2020…it lasted less than a month!

Now this gets interesting.

Higher inflation always feels awesome at the beginning; when it is created by the government sending out free money, it feels even better. The feel good phase of inflation could last years.

During this time, investors want exposure to risk assets. Actually, the riskier the better!

As long as money velocity stays low (see chart below) and central banks are not forced to raise interest rates, demand for risk assets will be good…maybe great.

There will come a point where the money velocity chart flips back higher and it will take interest rates up with it. There will be no place to hide when that day comes.

But that is not our worry for today.

For most investors the question is what are you going to do with all of your fixed income investments that now yield less than 1% as money matures?

That is a great question.

If you answer “take more risk,” I can live with that. But the second question I have for you is: “When will you know when it is time to not take more risk?”

Never hesitate to reach out to Megan or myself with any questions, comments or feedback.

With the largest percentage of the world’s economy in history in recession, the inflation fear is muted.