The stock markets still face lots of uncertainty, and with the Fed “slowly” taking away the punch bowl…be careful.

Thurman Lee Munson (June 7, 1947 – August 2, 1979) was an American professional baseball catcher who played 11 seasons in Major League Baseball (MLB) with the New York Yankees, from 1969 until his death in 1979. A seven-time All-Star, Munson had a career batting average of .292 with 113 home runs and 701 runs batted in (RBIs). Known for his outstanding fielding, he won the Gold Glove Award in three consecutive years (1973–75).

As captain, Munson helped lead the Yankees to three consecutive World Series appearances from 1976 to 1978, winning championships in the latter two years. He is the first player in baseball history to be named a College Baseball All-American and then in MLB win a Rookie of the Year Award, MVP Award, Gold Glove Award, and World Series championship. He is also the only catcher in MLB postseason history to record at least a .300+ batting average (.357), 20 RBIs (22), and 20 defensive caught stealings (24).

During an off day in the summer of 1979, Munson died at age 32 while practicing landing his Cessna Citation aircraft at Akron–Canton Airport. He suffered a broken neck as result of the crash, and his cause of death was asphyxiation. The Yankees honored him by immediately retiring his uniform 15, and dedicating a plaque to him in Monument Park.

As a young Yankees fan, I fondly remember Thurman Munson.

The list of professional athletes I looked up to, were mainly hockey and football players, but Munson was one of the few baseball player on that list.

He was skilled, abrasive, and a great team leader, but it was his “x factor” that attracted my attention most.

He both played the game and lived his life with a passion. Love him or hate him, he was noticeable and he had a game equal to his talk[i].

His sudden death shocked us all, but he enjoyed living life on the edge where things like that can happen.

When I start thinking about a great many of the imbalances in financial markets and the general economy, I see the potential for a “Thurman Munson-type” event growing.

Thurman Munson had the world by the tail, and out of nowhere, life happened and took him from us all too soon.

The financial markets continue to hold together quite well. Yes, technology is over-represented in the market performance, but the entire market has stared down a lot of adversity and held gains.

Yet, beneath the surface, I continue to see many of the same correlations growing that were characteristic of the post-mortem done on the 1998-2001 time frame.

This week I am going to show you a few charts that make me nervous.

The following chart is the most concerning chart to my BULL market thesis.

That big, blue hump you see is the size of the US Federal Reserve’s balance sheet. As the Fed balance sheet expands, stock markets tend to do quite well.

But we have seen some pretty severe corrections take place when the Fed is pulling liquidity out of the system.

The first two weeks of July saw the Fed pull about $245 billion out of the US financial system.

I have no doubt the Fed will turn the monetary firehose back on if a correction develops, but they will wait for a correction.

My advice: Keep your stop losses tight on your riskier trades.

The second issue that I see that worries me, is how the post-COVID economy is gutting out small business. 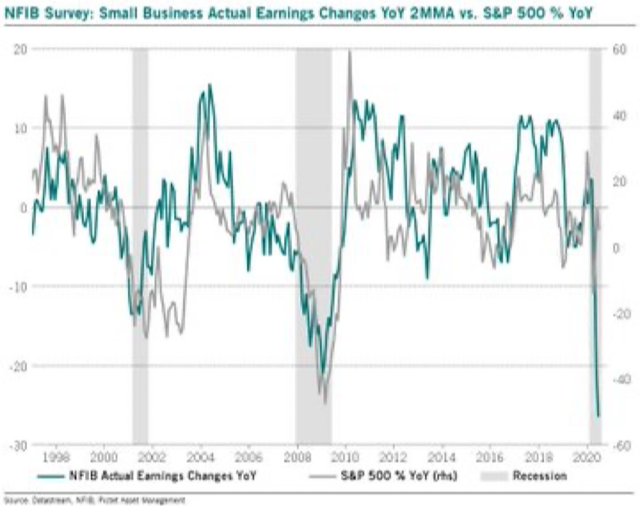 The NFIB survey on ACTUAL earnings for small business fell another 9% in June. The total decline is a record 28%...worse than 2008 and 2001.

The last time small business earnings were down this much the stock market was down more than 50% from its’ highest levels.

That is a pretty massive disconnect…and it comes with the economy starting to roll over again! The unemployment numbers in both Canada and the US are going to be key to watch in coming months.

Another issue I see continues to come in the area of technology stock trading profiles. 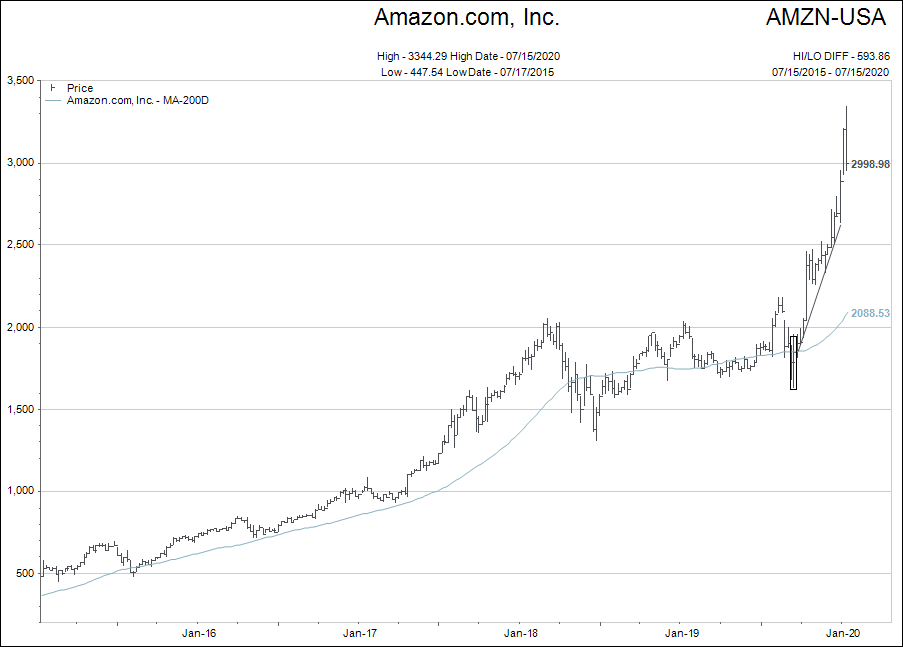 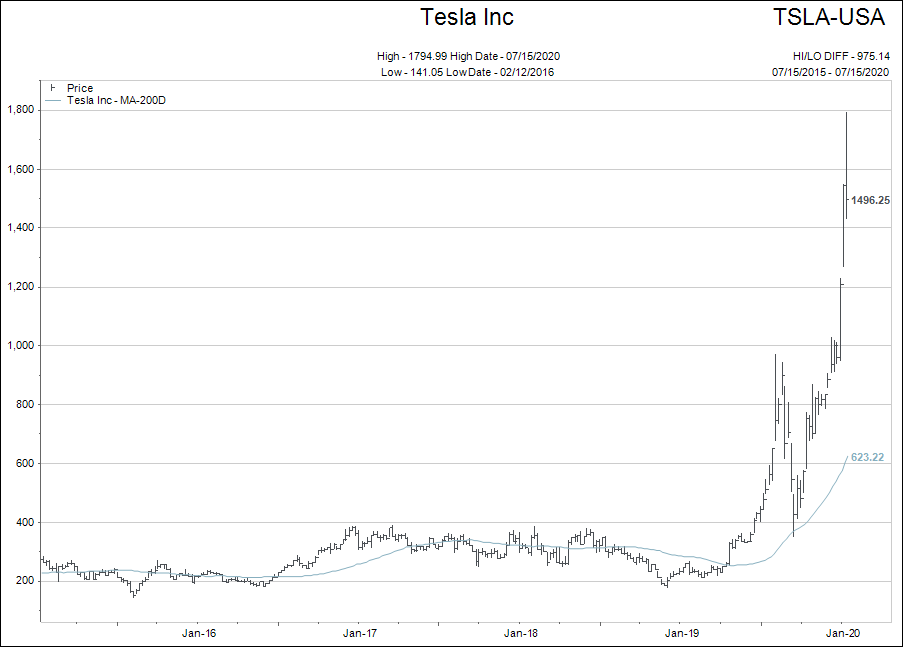 These companies are huge and continue to drive the stock indexes

Since I have been picking on Apple the last few weeks, let’s stick with that company and dig a little deeper. 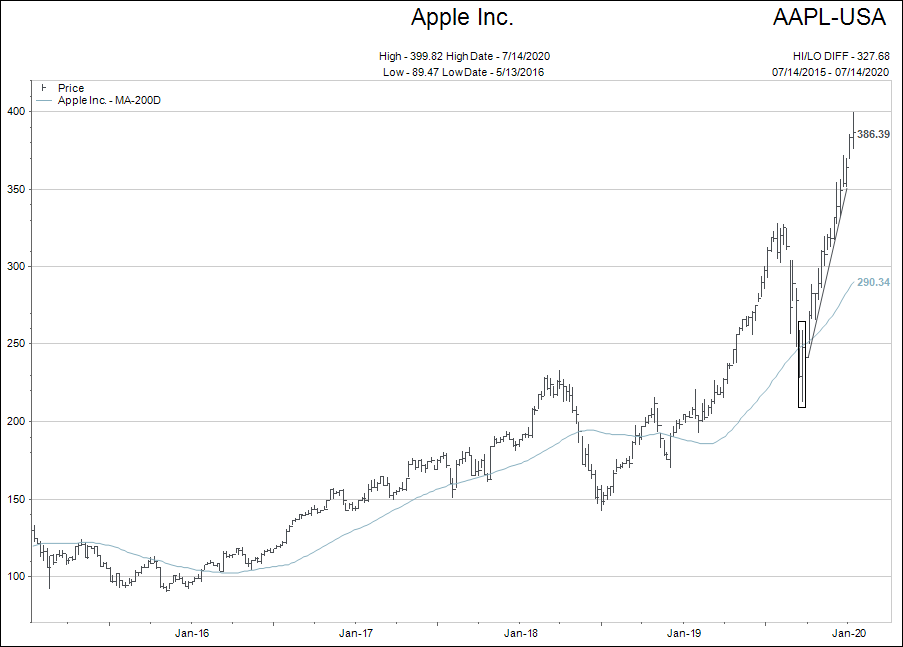 These trends don’t keep going without a correction. Especially when the fundamentals of the company do not follow along with the chart.

Check out the next graphic. It shows in picture form the data I used in written form two weeks ago. 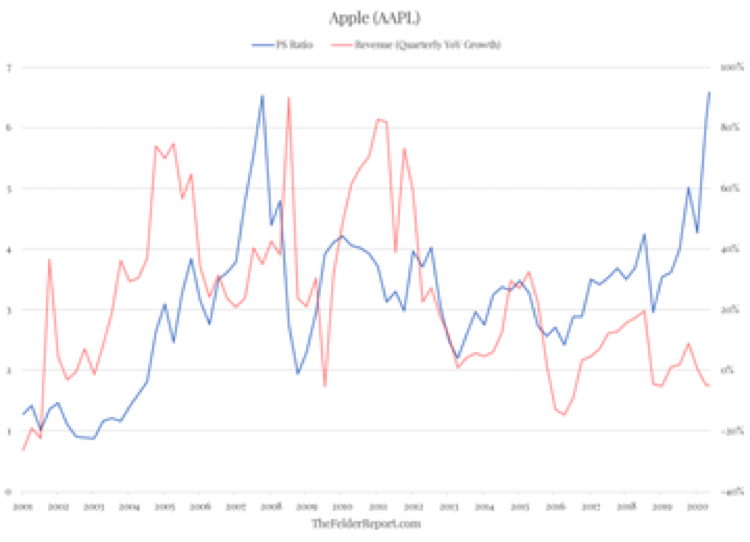 That is a good segue into my conclusion.

There are a lot of financial items out of sync at present.

Last week, I wrote about how in three-and-a-half years’ time the Dow Industrial could be 50,000 and interest rates could be zero.

In no way am I abandoning that outlook given the success the central banks have had in the business of asset inflation.

Also, between here and the US election in November, you are going to continue to hear about successful COVID-19 vaccine and treatments.

It is not going to matter if these vaccines or treatments are really that successful. The political life of the incumbent US President depends on their being a successful vaccine or treatment.

We will be told at least one of these things works so our lives can return to normal, because politicians can always say they are sorry and they were wrong.

So the stock markets have that meme going for them too, but Thurman Munson never expected to die in his airplane on that day off from baseball. It just tragically happened.

The stock markets still face lots of uncertainty, and with the Fed “slowly” taking away the punch bowl…be careful.

[i] (In a similar vein, if you have not watched the Netflix series on Michael Jordan and you are a sports fan you should. Michael is another example of that rare athlete that could put a team on his shoulders and spur them on to victory because he demanded more from himself than anyone else). 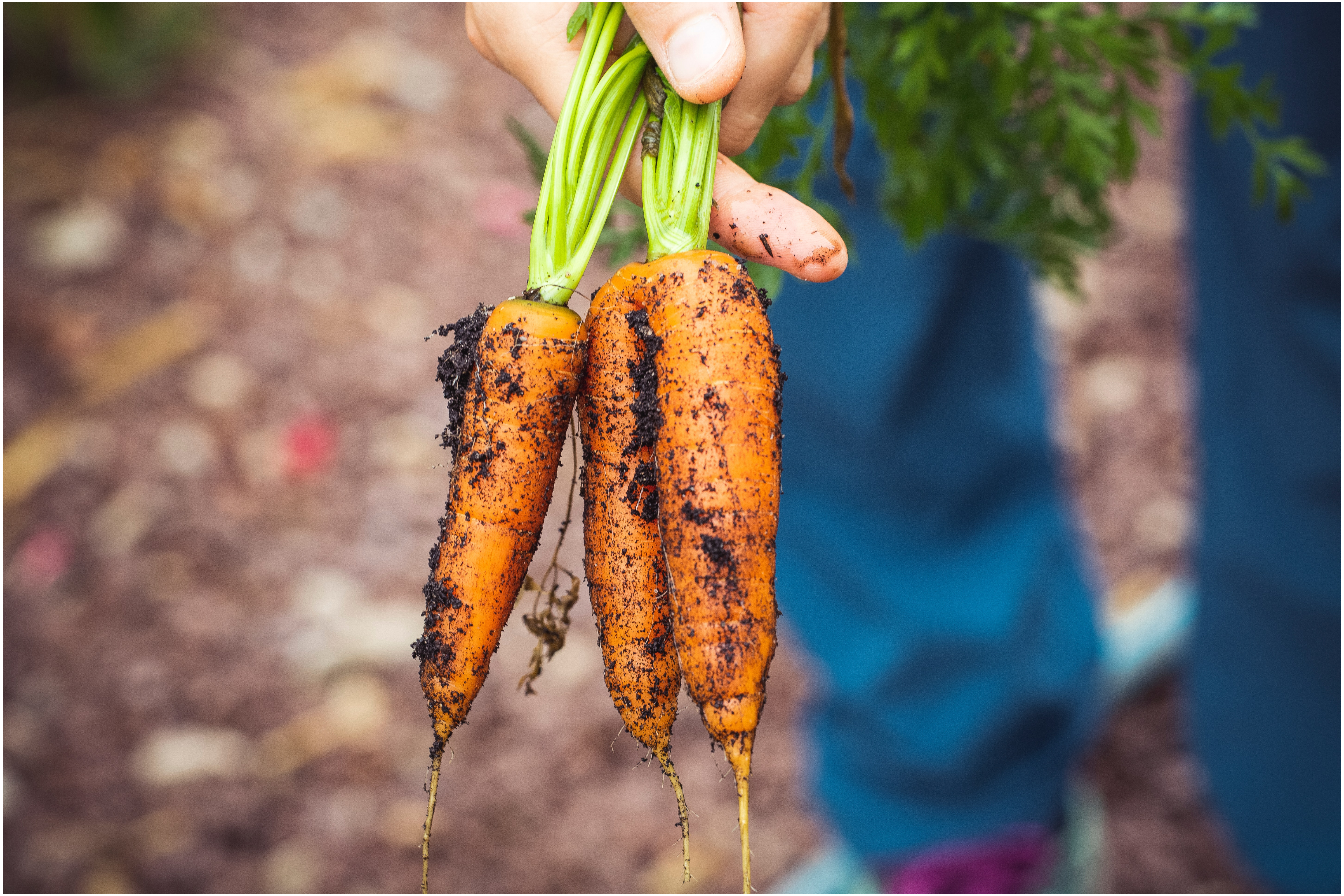 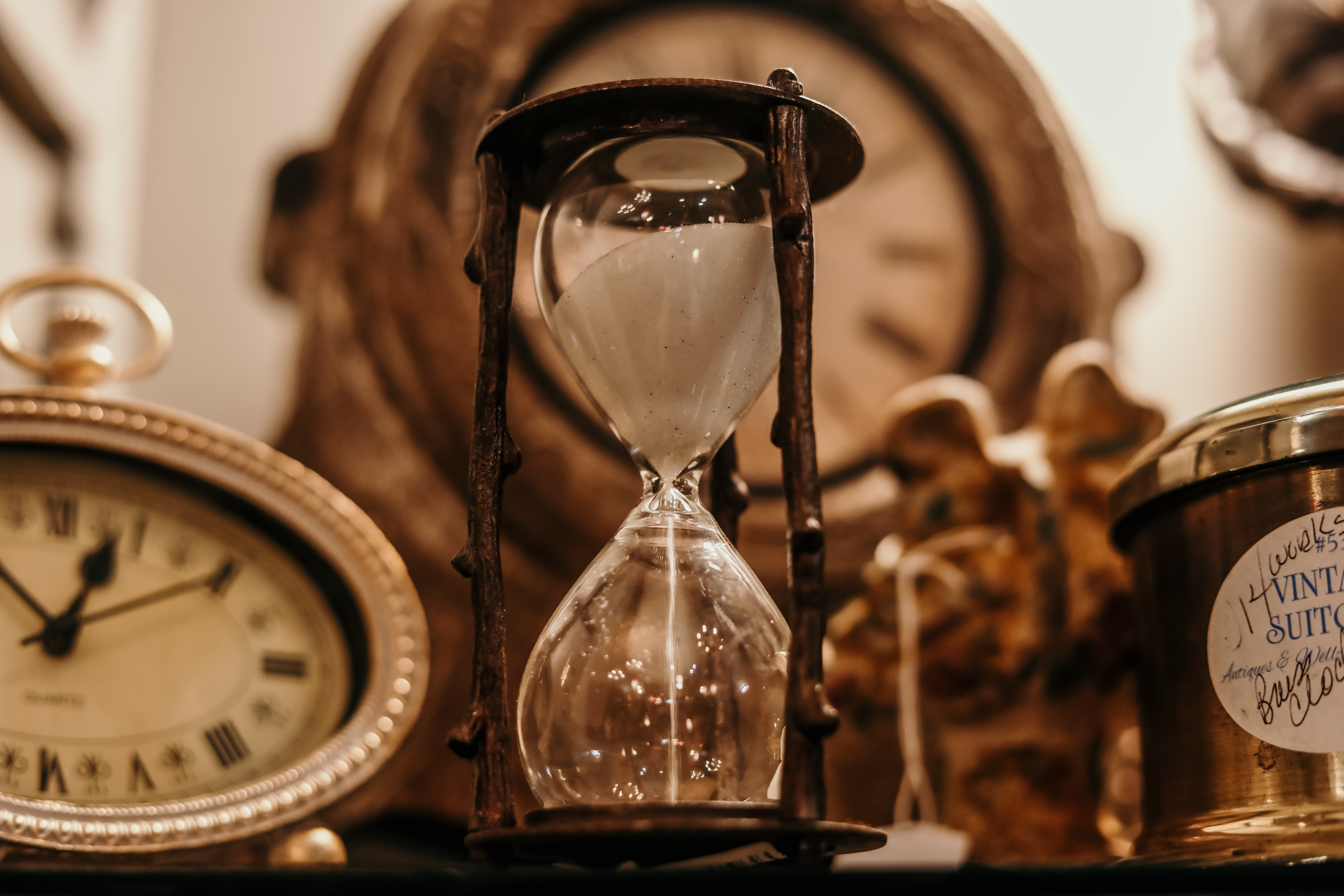