Really, there is just so much “spin” added to every story that to dig out a nugget of truth is becoming like dissecting an elephant.

When accountability fails there is usually a lack of “something” leading to the failure. The question ends up being was there a “lack of oversight,” or was the failure “intentional?”

This week we are going to look at three different topics tied together by various examples of “accountability.”

The video sent out early in the week, where RBC Wealth Management Investment Strategist, Jim Allworth, spoke to the glass-half-full recovery on the post-COVID world outlined the present conditions nicely.

I am going to play devils advocate on one specific issue regarding Jim’s analysis of the recovery that I feel is not quite as he stated it to be.

Below is a chart showing outstanding Canadian debt levels. 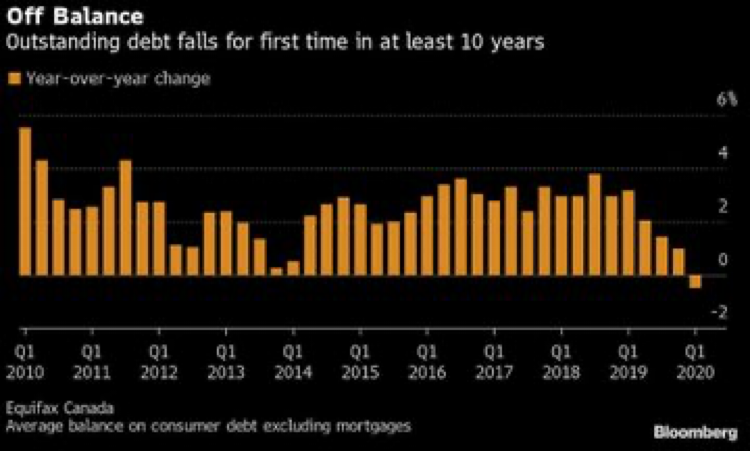 As the headline announces, outstanding debt falls for the first time in 10 years. The last time debt fell was in the 2008/2009 recession.

So what is this telling us?

Historically, debt levels fall at the end of a “bubble in something.” In Canada’s case, the bubble is real estate.

As the bubble flattens out due to exhaustion, investors sense there is a change occurring and begin to pay down the large balances of debt that have accumulated during the formation of the bubble.

COVID-19 likely created the spark that has started the debt repayment process.

When consumers begin to save rather than spend and borrow money, the prices tend to decline over a relatively short period of time.

Of course, the central banks are doing all that is in their power to keep the party going. And so far, they have been successful at maintaining price levels.

Relating this back to Jim Allworth’s glass-half-full discussion from earlier this week, the key difference between now and the period after the WWI and the Spanish flu is that the levels of debt are orders of magnitude higher than they were during that period.

The 1929-1932 period was a much closer comparison in terms of debt levels relative to GDP to the present day than Jim’s chosen period to use. I get why he used the Spanish flu period because it was also a pandemic, but the debt comparison lacks validity.

The Canadian government has added incredible amounts of debt to our country’s balance sheet during this pandemic. Whether you agree with this or not, is now “spilled milk.” 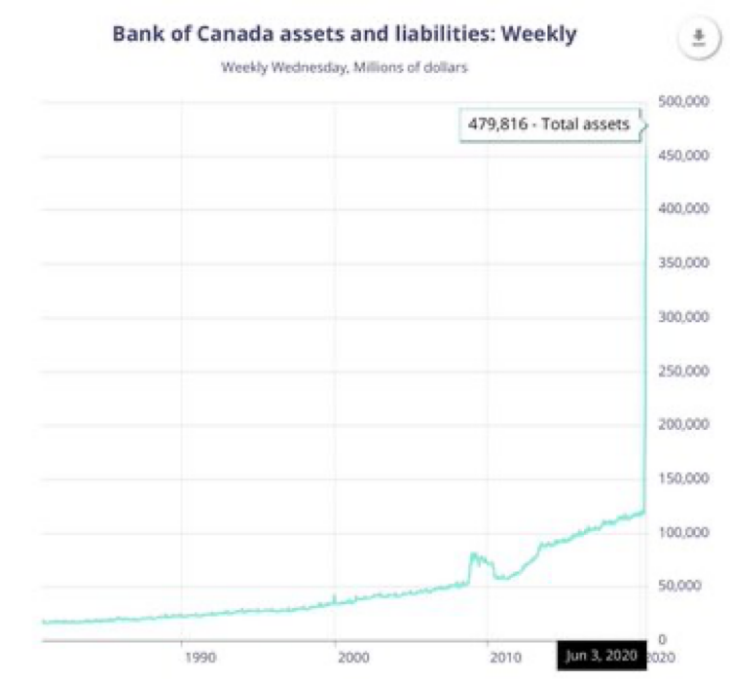 Canada is now an extremely leveraged nation and higher interest rates would be difficult for Canadians at all levels to handle. Canada does not have the luxury of being a “reserve currency” like the US or, to lesser extent, the Eurozone.

It is time to watch carefully.

There is always another side of the story.

I have written about this before, but the gap between company performance and share price is becoming hugely pronounced.

The two charts below show the annual growth in Apple revenue and earnings for the past five years. 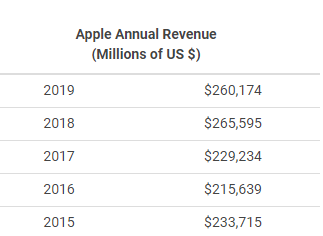 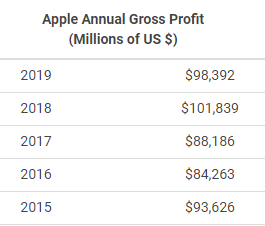 Trends for Apple revenues and earnings have been flat. The present year is likely going to be flat again.

If all I showed you was the two graphics above, what would you expect the performance of the price of Apple shares to look like?

Me, I would guess the stock would look pretty flat too.

Now you do have to add in a huge amount of financial engineering when you talk about Apple.

Share buybacks and the like have been used to offset the impact of stock option issuance, and has made the “per share” calculations look significantly better than the raw earnings and profits.

But still, look at the stock price performance below. 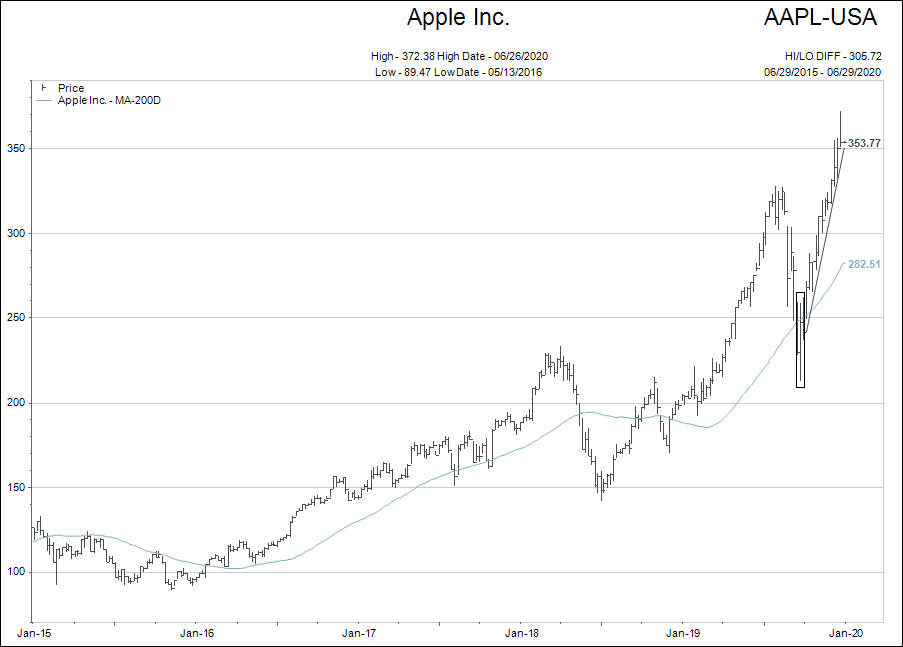 dollar of earnings in Apple than you were paying five years ago!

The reason I am pointing out how expensive Apple shares are relative to their earnings from five years ago is simple. Because nobody else is doing it.

You will hear about this someday IF the stock market happens to decline significantly and stay lower.

Analysts will show these types of statistics and say, “What were we thinking?”

But where is the accountability in that?

How this issue ever grew to be so politically charged I’ll never really understand.

I see the pathway we took to get there, but I am saddened it could not be changed at some point along the way.

Below are the seven day rolling number of COVID cases for the entire United States. 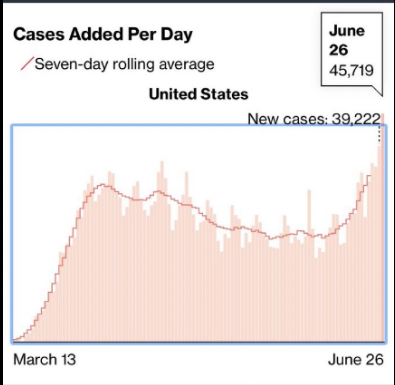 The front end of the case jump in March was concentrated in New York and New Jersey. The June ramp up is more broadly spread across a greater geographic area.

Here is a question I have been thinking about the past week or so:

What was the point of shutting down the economy in the US if the plan was to re-open too soon and, not wear masks and have mass gatherings?

I get it. We could not leave things closed until there was a treatment or vaccine. But could we not have done a better job making safety precautions appear sensible during the re-opening?

This issue is so politically charged that it can’t even be named correctly. The media uses the term Reversed Reopening…Are you kidding me? Is it that tough to say “shutting down again?”

Goldman Sachs estimates that “40% of the US has “reversed reopening,” impacting about 30% of the US population.

Really, there is just so much “spin” added to every story that to dig out a nugget of truth is becoming like dissecting an elephant.

Where is the accountability in any of this? There will be none if my guess is correct.

Hopefully people will see the world is well on the way to the COVID-19 second wave spike.

Hopefully people will be wise and think for themselves.

Hopefully they will take precautions when they go out into public. Not only to protect themselves, but to protect others…hopefully.

When I think of 30 years ago, people and institutions that were held accountable for what they said or did. This is no longer true.

How did that happen?

The center of this issue remains squarely in the court of “social media” accountability.

Social media of 2020 reminds me of the wild west of the mid 1800s. Young and immature, and riddled with growing pains. And unfortunately, easy to abuse.

Hang on to your hats. The run up to the US election is going to be one for the history books…and it could impact financial markets.

As always, please feel free to email me with your comments, questions and concerns.