Some of Your Replies

Last week I asked you to respond if your feelings towards Donald Trump or how the government in BC handled the COVID-19 lockdown. Last week, the key to the question was: “Did your feelings change?”

Below are some of the comments, thanks to all of you who replied.

I was pretty supportive of the lock-down. I was concerned about the size of the handouts, but generally supportive. Now I have concerns about how businesses are going to come out of this slump with existing government programs.

While I realize the issues are very complex, and some help was needed initially, these programs at present appear to be preventing our economy from getting restarted. I am hoping that politicians can work together to modify these programs to mitigate the deleterious side-effects of programs that had very good intentions. We cannot all keep living off government hand-outs. The money has to come from somewhere.

I went from.......not really liking him much when he got elected...to...what a terrible person he is.

He only cares about himself, his family and all his money and privileges.

He constantly throws other people under the bus, he would never admit fault himself.

Even with the virus raging in the US, he doesn't appear to care how many people die as long as he gets the economy going again.

He may be a very smart business person but some of his other decisions are downright crazy.

All this being said...overall he has been good for business and the stock market.

But you have to think his chances of winning the next election have taken a huge hit especially with how he's handling Covid19 and all the rioting since the death of George Floyd.

The Republican Party allowed Trump to do exactly what he told everyone he was going to do. The political system in the USA is broken. Trump continues, with the Republican Party backing, to further Trumps economic and political views (He has no world view just him and the USA).

The unrest in the USA today is a reflection of the views held by Trump and the Republican Party.

Today’s riots and street protests are really the accumulated knowledge of the citizens, realizing that their country has absolutely no one person or political party leading them against the Pandemic or assisting in in their concerns about jobs and health.

Trump will be gone in November! There will be a lot of lawsuits against Trump and his close friends.

I believe, depending on what part of the country we live in there are concerns! Heath and jobs.

The leadership of each of the Provinces has been good, and the federal Government have provided a positive supporting role. However, Trudeau, as he did before, seems to think he can do what every he wishes, he does not seem to realize his is a minority government and he should be working more closely with the opposition parties and the provinces.

Trump – as I until recently spent a lot of time in the US -the business community appreciates the changes made from the previous leadership however the underlying tone is always there – stay off twitter and keep your mouth shut.

My personal opinion is that he makes a stand (albeit right or wrong), but is not entirely indecisive. The taking on of China and other nations dumping product into the US has been an interesting event to watch as my business has been directly impacted, but it has gotten more US people to work and may have been long overdue by holding these countries accountable for their selling price versus costs. The outsight thought is he created a protectionist economy, but I don’t see an issue with bringing jobs and business back and looking to employ more citizens. Canada in my mind could do something of the same.

The taking on of the WHO and other bodies that need to be more accountable, transparent and accurate in their details to me is the challenging of the status quo and where nothing may come of it, the exercise is worthwhile.

Where he has lost me is his recent actions, tweets and outbursts with the current racial tensions in the US – not a good look on him and where this leaves him is uncertain as this issue is long overdue being brought to the forefront.

COVID – after just re-watching the movie Contagion, it closely mirrors where the globe has been as we await the drug to prevent it or cure it. I am a believer that social distancing is still our best means of prevention and that we will see a second wave as people’s DNA is to be close to others and I don’t believe everyone is capable of being responsible – History repeats. I also believe that rules and regulations could be regionalized being that the major urban centers are the understandable hubs of the virus, but I do see the difficulty of enforcing regional differences. As to what it has done to the global economy long term, remains to be seen but the way our PMO has thrown money around, been slow on the take from the get go and remains doing what he is, will leave a long and arduous burden of debt on our country, kids and grandchildren.

According to your criteria, I shouldn’t be responding to your poll.  However, in the strictest terms my views have changed.

Trump:  My view of him is that he has gone from an ass to a dangerous ass.

BC politicians and CV19:  My view has gone from satisfied with their performance, all the way to “impressed” and proud that they are our leaders.  (This from a lifelong socred and liberal party supporter.)

It appears to me that Trump is running scared and grasping at straws with an election bearing down on him. As a result, some of his comments would be laughable if he were not running the most powerful nation in the world. My respect for him has plummeted.

The Federal Government’s reaction has been to spend money without the slightest notion of eventually having to repay the debt incurred. I expect a major devaluation of the Canadian dollar when the smoke clears due not only to this spending craze but cutting off the income from future oil exports.

On the positive side, the BC Government surprised me - particularly the decision to let Dr. Henry front our efforts to contain the virus.  The Premier and the Health Minister had really good advice to stand back and let her face the public.

Our leaders should have taken a much more targeted approach and not shut down the economy. Huge majority of deaths were seniors, especially in LTC facilities.

Thanks for the feedback to those questions.

There were quite a number of you who wrote back much more scathing feelings about Donald Trump and his Presidency. I didn’t include them in the comment, but I want to acknowledge these comments came in.

President Trump is a polarizing figure, to say the least.

I was also surprised nobody wrote in to support Donald Trump. I’m not sure if there is a message in that fact or not.

On the question of the handling of the lockdown I felt the responses were about on target to expectation.

It is going to be quite interesting to see if there is a second wave of COVID given all of the protests of the past few weeks.

Thanks again for taking the time to write.

It made me smile the other day when I heard a person use the “dollars to donuts” expression.

I’m sure most of you are familiar with the expression, but if not, it was meant to signify a “lopsided bet” since you could get a dozen donuts for a dollar. Therefore, you were giving the “donut” side of the bet excellent payoff odds by betting one for one.

Well, thanks to a lot of fiat currency devaluation, or better known as inflation, the cost of a single donut is now pretty much even money with a dollar at Tim Hortons.

Hey, go to a fancy donut joint and the person betting the dollar is getting the favourable odds. Just made me chuckle.

The next few headlines and charts are probably going to lead to a lot more currency devaluation in the future.

One generous proposal on Capitol Hill could put as much as $10,000 per month into American families’ hands to help them weather the coronavirus pandemic.

In some ways, it’s a nod to universal basic income, the concept of indefinitely providing people with a guaranteed amount of money per month. But the plan calls for providing the financial relief for only as long as the pandemic lasts.

I have two comments about this headline, and then I’ll move on.

The first chart shows the unemployment rates of decline in the US during this recession relative to past large recessions.

This will become an interesting chart to watch. 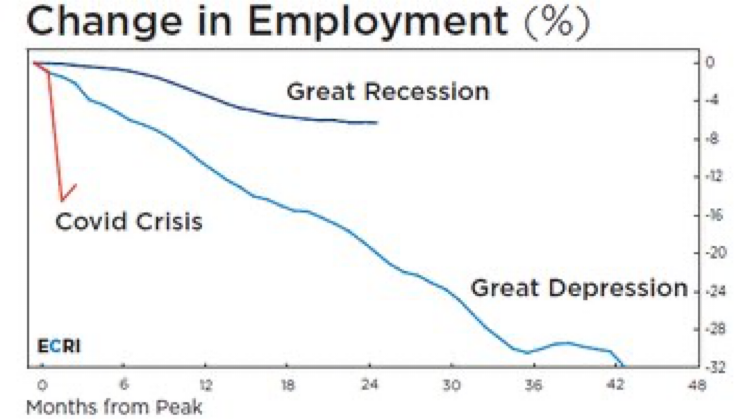 Not to be flip, but why would anyone in the service sector go back to work if the Bill above was passed allowing a couple living together earning minimum wages at their normal work to receive $4,000 per month? (2x$2,000 per month)

What about the family that has one wage earner earning $60,000 a year and a part time wage earner making $15,000 per year. They have two children.

I’m sorry, I just don’t get these programs and how they are going to let the economy heal.

The next chart shows the Shiller Price to Earnings Ratio up to the end of May. The higher the P/E ratio, the more expensive the stock market is.

The present spike is unprecedented. This spike is only greater today with the further rise in markets in June. 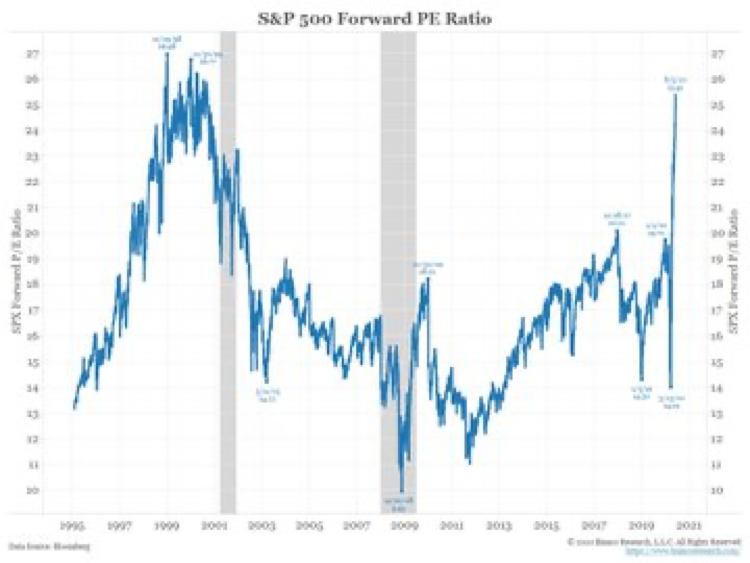 The Put/Call ratio is not a great market timing indicator. It tends to be one of those charts you look back on and say, I should have known markets were either cheap or expensive.

It is at the most extreme level in history today. 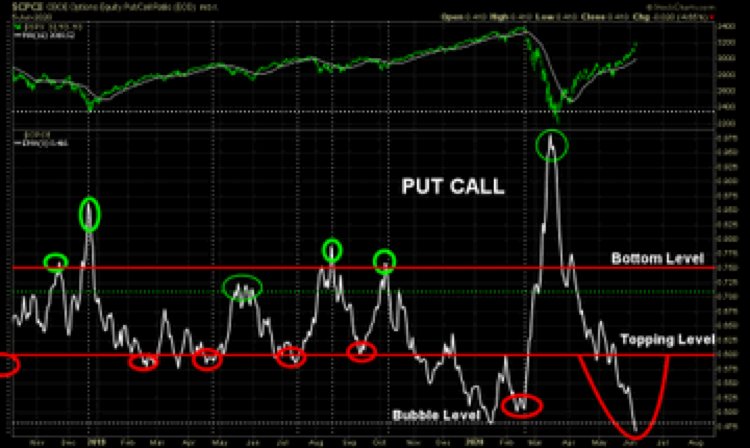 Enough for this week, please email me if you want to discuss anything about or any other concerns. Enjoy!

My goal would be to maintain a hybrid of both office and working from home going forward.