No question, there is “COVID-19 information burnout” happening in the world at present. I will avoid the topic completely. This piece considers our possible long term economic path that results from our leaders policy choices so far.

Japan and Europe are years ahead of the US and Canada from the perspective of financialization and what impacts it has on the real economy.

The Great Crash of 2020 was not caused by a virus. It was precipitated by the virus, and made worse by the crazed decisions of governments around the world to shut down business and travel. But it was caused by economic fragility.

The supposed greatest economy in US history actually was a walking sick man, made comfortable with painkillers, and looking far better than he felt—yet ultimately fragile and infirm. The corona- virus pandemic simply exposed the underlying sickness of the US economy. If anything, the crash was overdue.

Too much debt, too much malinvestment, and too little honest pricing of assets and interest rates made America uniquely vulnerable to economic contagion. Most of this vulnerability can be laid at the feet of central bankers at the Federal Reserve, and we will pay a terrible price for it in the coming years.

This is an uncomfortable truth, one that central bankers desperately hope to obscure while the media and public remain fixated on the virus.

Remember, this comment is not about COVID-19. Therefore, we won’t debate if lockdown, no lockdown “herd immunity,” or some other choice was medically better than another.

What I want to draw upon, is the idea that our western economies were kept afloat by “cheap money applied liberally by central banks” even during the good times since the 2008/2009 recession.

So now when a real economic crisis hits, the only play left in the playbook is more “cheap money applied liberally by central banks”.

If you can accept the emboldened statements above then we can ask a new question:

What has the economic path looked like in other countries that have taken this route before us in North America?

There are three examples either more extreme or further down the path than us in the West. Two mentioned above look very similar to each other, and one quite different.

Japan and Europe are examples of economic zombification due to monetary policy. Interest rates have been zero or negative for years, growth has been substandard, competitive advantage nullified, and central banks control the capital markets and banks.

China is the other example where, under communist regime, a pseudo-capitalistic system has flourished. But under this shining economic exterior is a mountain of debt and government intervention that would make our North American central bankers blush.

Japan and Europe are late-stage “zombies” and will only change with complete overhaul and debt sanitization.

China’s future is much like that of North America and still has many outcomes possible.

What prompted me to write this short editorial was the realization that there were “financialization tipping points” in both Japan and the Eurozone, where money printing to support financial market valuations completely destroyed realistic price discovery.

If one looks at the debt to GDP ratios in these two areas, it is clear that maintaining the status quo economic conditions requires unfathomable amounts of central bank support.

The open question I pose today: Are we beginning to see the same signs of zombification in North America?

The first graphic shows the US Federal Reserve Balance Sheet.

Remember the “tapering on autopilot” that Federal Reserve Chair Jay Powell spoke of in 2017? It took nearly two years to shed $500 billion until late 2019, when the Fed “repo-panicked.”

In 40 days, the Fed has added $2.4 trillion to its balance sheet and is still in full “print mode.” 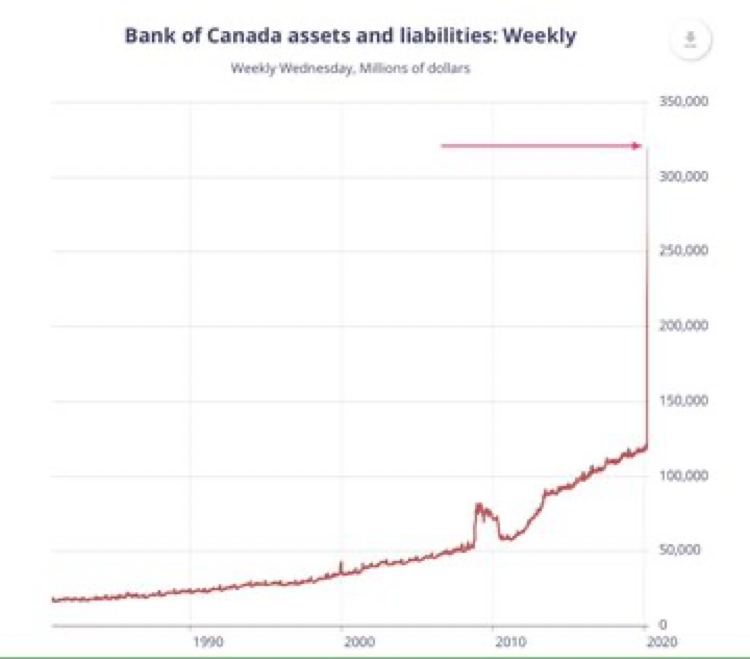 As a percentage of the baseline balance sheet, Canada has absolutely blown away the US Federal Reserve in money printing.

You can ask “where does this money come from,” or “what assets are securing these funds,” but you will not find any answers to those questions.

This is what Japan did over the past 35 years, and what the Eurozone has done over the last 11 years.

Will it lead to a different place in North America? We will see.

In the past couple of years, I wrote about Modern Monetary Theory (MMT) and how the proponents of MMT explain away the “zombification” of an economy. These were “academic” arguments up to a month ago.

But this is no longer just a drill. This is “seat of your pants, MMT” monetary policy being employed.

How does this relate to your portfolio, retirement, and the rest of your life?

We really don’t know yet.

Does it morph into long term deflation? I strongly doubt it when the central banks can print fiat money at will.

Does it become a huge inflation? Japan and Europe would argue against that outcome.

Does it become a deeply rooted “stagflation?” Yes, this seems much more to be the result.

What happens to financial markets in stagflation? What are the best investments in those conditions? Great questions.

You see, it is just too early to tell.

I hear lots of people telling me the worst is over for markets, COVID-19 and everything else for that matter. It is time to return to normal.

To that I say, I really, really hope that is true, but I would not bet my portfolio on that outcome.

As a final thought, there are some extremely thoughtful editorials and webcasts floating around out there, that take a shot at trying to analyze where the world sits today.

For those so inclined, let me know and I will create a new distribution list to send some of these to you.

Please email if you want me to call to chat.