Just how fragile the entire global economy was/is that it could be taken down in less than 30 days, only highlights the root of the problem in the financial system…little savings and excessive levels of debt.

The state of capital markets in April 2020:

“A Central Banker walks into a Casino to play blackjack

Loses every hand but doubles down on each bet.

Dealer says: Aren’t you worried about running out of chips?

Central banker: No, I make my own chips and keep playing until I own the casino.”

“If the Fed bails out EVERYBODY then NOBODY actually gets bailed out. Think about it”

The degree to which you agree with the following statement will likely predicate how you invest in coming years:

The economy is not the market.

The market is not the economy.

The Fed is the market.

That is why we can have a stock market only slightly below all time high prices and record high valuations, yet have Depression levels of unemployment and food bank lineups that wind through cities for blocks.

The US government and Federal Reserve have announced approximately $12 trillion in initiatives in the past 45 days. That is the equivalent of about $40,000 per man, woman and child in the US.

How has that money been distributed?

The remaining $38,800 per person? You guessed it…propping up the banking system and Wall Street.

Winston Churchill is credited with saying, “Never let a good crisis go to waste.” When I look at how emergency funds in the US have been distributed, it reminds me of the very fabric of Churchill’s words.

I’m going to try and be clear and concise. When the economy implodes and people are laid off to Depressionary levels in a matter of weeks, the resulting economic problem is DEMAND based, not SUPPLY based.

So when Jeff Gundlach says, if the Fed bails out everyone then nobody gets bailed out, he is stating the truth.

Recessions do the same work as forest fires.

…As devastating as they are when they happen, forest fires clear the way for new healthy growth to come in after the fire and start the cycle again.

Just how fragile the entire global economy was/is that it could be taken down in less than 30 days, only highlights the root of the problem in the financial system…little savings and excessive levels of debt.

The solutions employed by central bankers and politicians so far are exacerbating these root problems, by continuing to not allow them to correct.

Where this path leads, nobody knows at this point.

It feels inflationary to me, and that is why I relate to the analogy of the central banker in the casino playing double or nothing until they own everything.

Let’s move on to my monthly relative valuation analysis of stocks, bonds and gold.

Stock markets are levitating on the hope the central banks can print enough money to stave off a short term decline in economic activity and the world can return to “normal” in a few months. 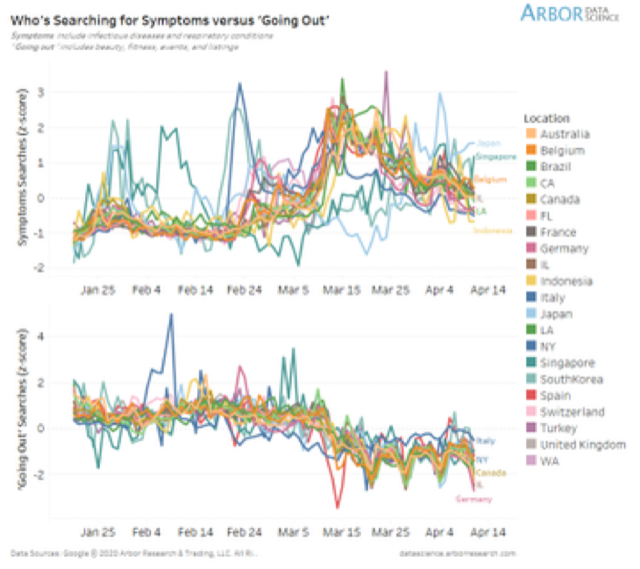 The image above paints a thought-provoking picture.

The chart is saying that, even in countries where the COVID crisis has long ago peaked, searches to “go out” have not shown signs of recovery.

For a certain percentage of the population, the world is not going back to where it was a few months ago for a long time.

The chart below shows the average GAAP earnings expectation going forward on Wall Street. Overly optimistic is an understatement.

The next chart is JP Morgan. I think it is optimistic, but realistic. 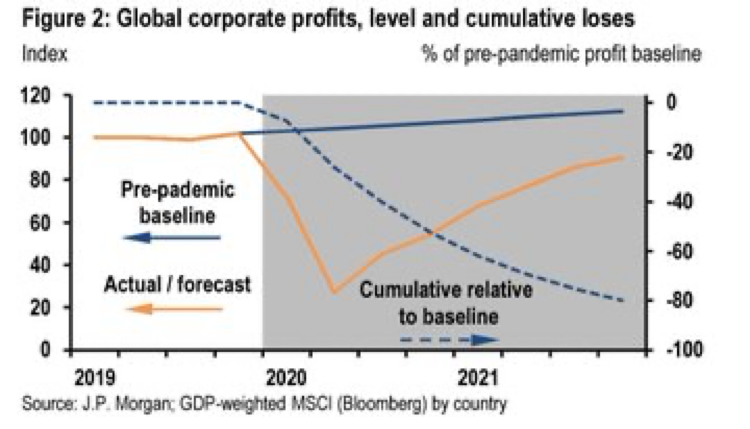 Any way I slice it, stocks are the most expensive in history using my relationship formula versus bonds and gold.

Bond markets have been extremely expensive since the beginning of March. Nothing has changed there.

Bond markets are “uninvestible” at this time and need to be exited if you own maturities longer than 3 years in duration in the next few months.

Because of all the freshly printed money around the world, it is really hard to do the Gold valuation. Gold gets cheaper in relative value as money is injected into the banking system, but gold is expensive using my relative value formula there too.

What are you saying Nick?

Unfortunately, nothing shows relative value at this stage of the market cycle.

Since the central banks decided to flood the world with money to support prices AGAINST the fundamental values that asset prices would have found without their efforts, everything naturally becomes over-priced.

Let’s wrap this up.

The re-open of the world is coming. The world can’t stay closed forever, or until a vaccine is found, but people still have free choice to how much they are going to re-open their lives.

Because a re-open increases the chances of getting sick significantly.

People know this and, for many, will choose not to go out any more than when the businesses were closed.

Prior to the COVID pandemic the world was mired in over-capacity. The central banks were already printing money in the “good times to keep it going” (Repo activities and bank liquidity).

Clearly, global over-capacity is worse now than before the crisis.

A final bold statement: The earnings recovery will be much slower than the market recovery for companies.

And that is why EVERYTHING is expensive now and likely to stay expensive.

Your feedback, rebuttals, questions and comments are always welcome, so please don't hesitate to email them to me.