As of Friday last week, the S&P 500 had made its way back to the healthiest technical position it has seen since January 2018.

Absolutely good news. Investors should still be invested in quality companies under those types of technical supports.

But the stock market technical disconnect from the fundamental real economy is wide and growing.

Last week’s comment focused on share buybacks. It was shown that since 2009 there have been over $5 Trillion in corporate share buybacks in the US; see the gold line below in my blurry chart…sorry. 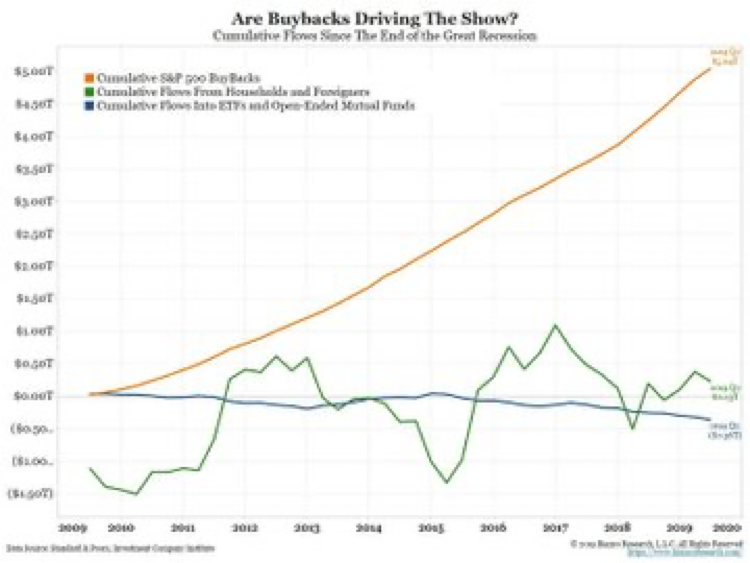 Viewed from another perspective: 95.5% of all S&P 500 corporate EARNINGS in that same time period went into corporate share buybacks.

It is easy to see how corporate buybacks at these levels distort stock prices and valuations.

With all of that out of the way, let’s look at the technical picture for the US stock market. Here are a couple of updated charts for you to look at. 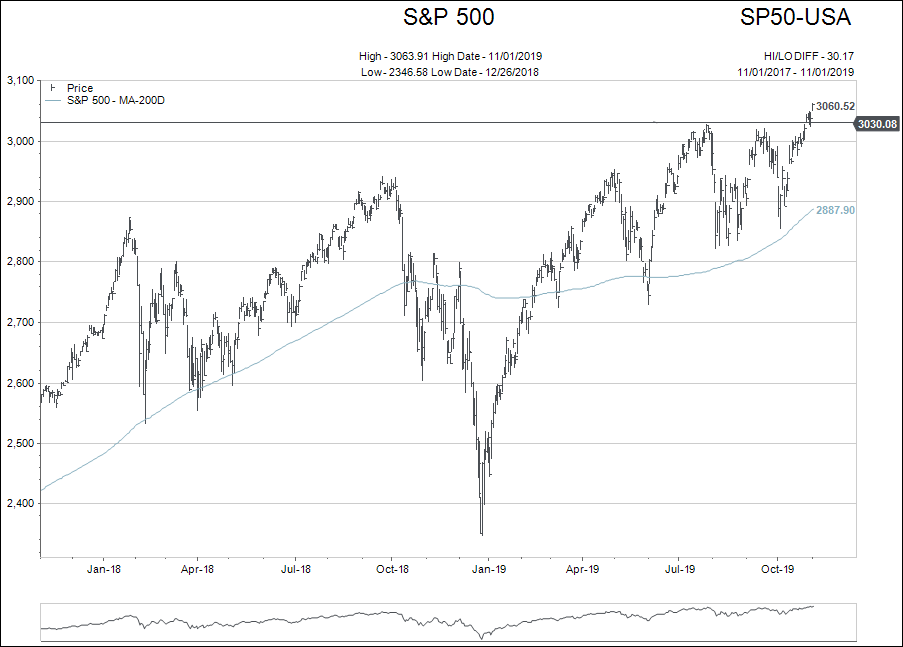 The US anticipated breakout of the S&P 500 has taken place. Remember the two key levels I have been using are 3030 and 3130.

The next chart shows why the 3130 level is a potential “pivot point” for the US stock market…or a launch pad to go much higher with all of the QE being done around the world. 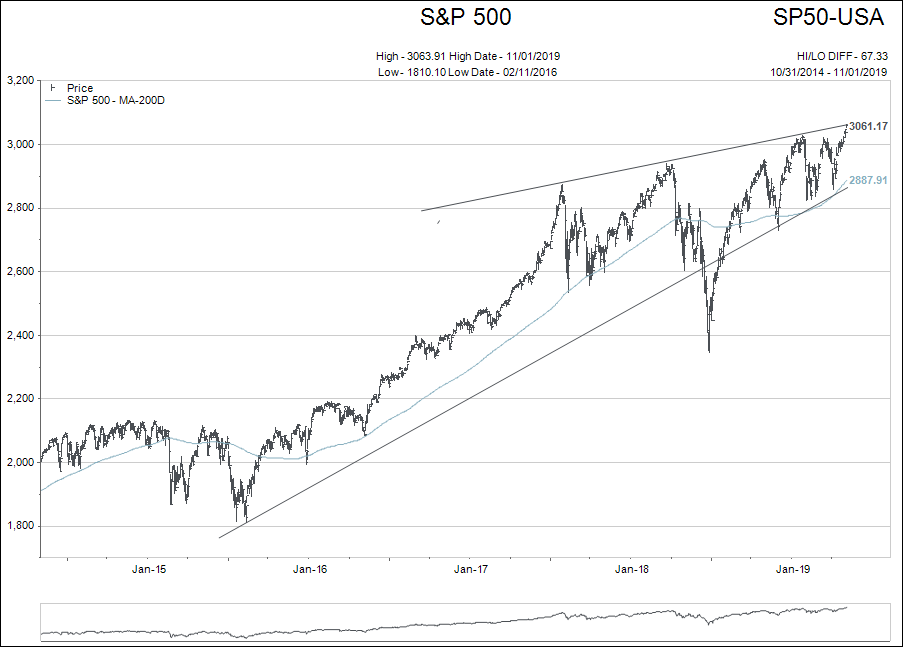 Let’s see how this chart plays out in coming days and weeks.

The Canadian stock market is still range bound so we will leave it until something interesting happens.

The bottom line for investors is to stay invested while the great monetary experiment still has room to expand. The best indicator as to when this expansion is nearing its completion is watching for interest rates to near the zero bound.

At that time, a full re-examination of where things reside will be required.

Absolutely love this next chart; what an easy way to view consensus growth expectations around the world.

It makes it easier to understand why global central banks have “upped their game” and are presently intervening at a higher rate than any time since the great recession.

For the record, the graphic below is specific to recession risk in Canada. The matrix of economic inputs gathered together by @soberlook is used to predict a pending recession looking out six months. 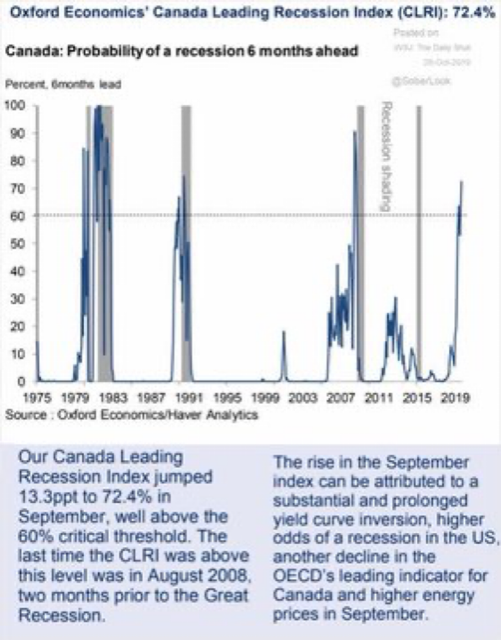 The indicator missed the technical recession in Canada in 2015 and tends to be “early” in its call.

Last week, the Bank of Canada held its overnight interest rate steady. The US Federal Reserve cut its interest rate by 0.25%. It struck me a strange as to why the US Fed would cut interest rates when the stock market at an all-time high AND they have only six 0.25% interest rate cuts left in their quiver before reaching the zero bound…why not save the cut for when asset prices are floundering?

Fact is that the central bankers of the world are quickly running out of monetary policy runway to try and re-ignite global growth. Low interest rates and massive deficits have become the normal course of action.

On a side note, as the world prepares for the insanity that is going to encompass the US election campaign, which is only a year away, I want to guarantee something you will hear no politician promise.

Neither political party is ever going to tell you how they are going to bring the debts and deficits under control. Actually, you are going to hear the exact opposite, and that debt doesn’t matter anymore.

Want to know why you won’t hear any politician speak to controlling the debt? The graphic below is worth 1,000 words and since I’ve restricted to using only 750 in these comments…

How on earth does ANY government turn those charts around?

Remember, each of those lines is Gross Domestic Product (GDP) minus the national debt (red) or national debt + unfunded pension liabilities (blue).

As stated above in the summary of section one:

The bottom line for investors is to stay invested while the great monetary experiment still has room to expand. The best indicator as to when this expansion is nearing its completion is watching for interest rates to near the zero bound.

At that time, a full re-examination of where things reside will be required. 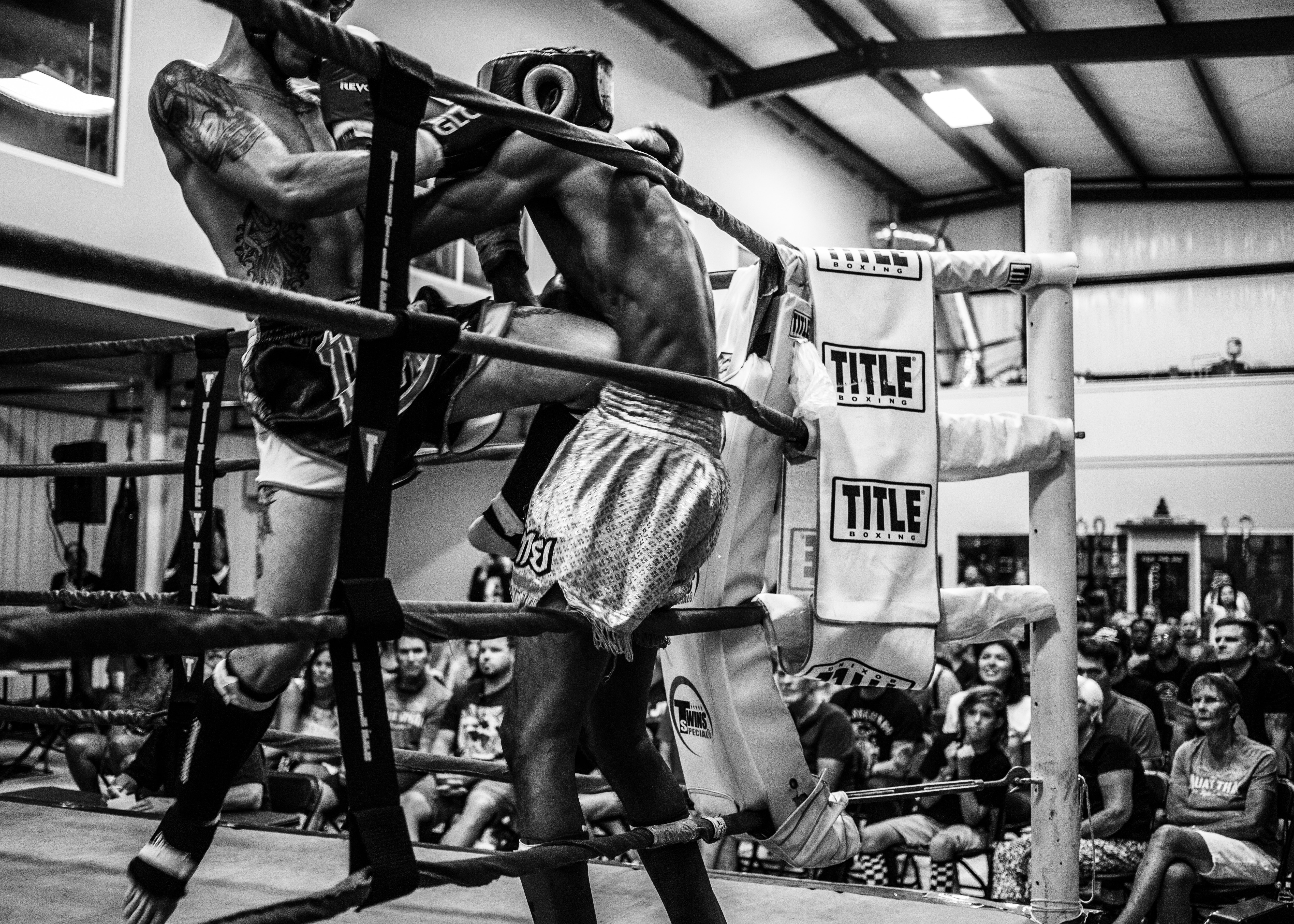